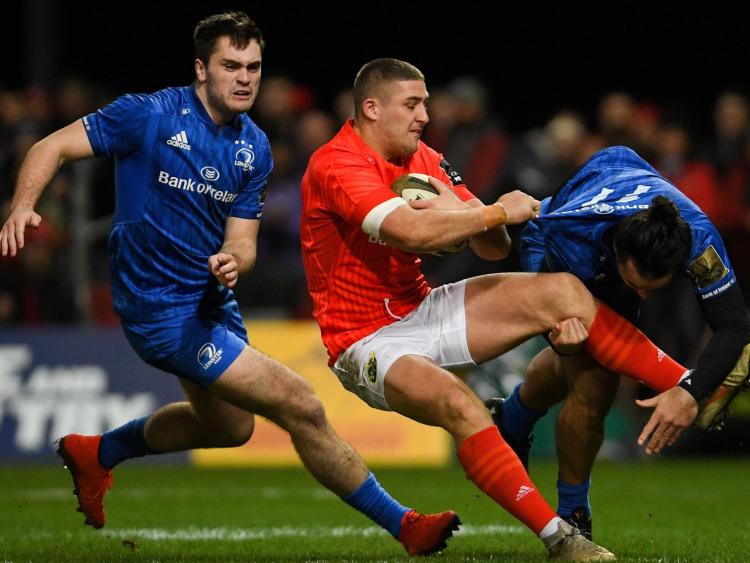 MUNSTER surrendered their two-year unbeaten home record at a sold-out Thomond Park when succumbing 6-13 to arch rivals rivals Leinster in the battle of the two Guinness Pro14 conference leaders on Saturday evening.

Leinster were the last side to win in Limerick in December 2017 and the Pro 14 holders can thank their outstanding second half defensive effort as they deservedly ended Munster's 21-game unbeaten record at the venue.

Wind-assisted Munster pounded the visitors line for long phases of that second half, but Leinster's defensive effort was heroic. Ultimately the home side had to be satisfied with taking just a losing bonus point from the fixture which attracted a record-equalling attendance of 26,267.

Visitors Leinster made the most of the conditions to race into a 13-0 lead coming up to half-time. A JJ Hanrahan penalty on the call of half-time reduced the visitors advantage to just 10 points at the break.

However, despite enjoying a far more plentiful supply of possession and territory in the second period, all Munster could muster for their effort was just three points.

Leinster didn't add to their tally in the second period, but they didn't need to as Leo Cullen's charges maintained their lead to full-time, cementing their place at the top spot of Conference A of the Guinness Pro14.

"Small moments when they could build the pressure, they'd lose a line-out or give away a penalty."

Munster have now won just one of their last seven meetings with their great rivals.

On a positive note for Munster, the game did see a return to action for their Ireland out-half Joey Carbery who made his first appearance of the season for the province when introduced as a 56th minute replacement.

Carbery's return to action is a boost for Munster with the crucial Champions Cu fixture away to Racing 92 now just two weeks' away.

The fixture might have been stripped of several star names on both sides as the teams respective Ireland internationals sat this one out, but it lacked for nothing in terms of industry and endeavour.

Conditions were dry overhead, but the swirling wind made it difficult for both sides in terms of their kicking games and line-out throwing.

Munster's starting line-up showed seven personnel changes made to the team that defeated Connacht 19-14 at the Sportsground a week earlier, while Leinster made nine personnel changes and two positional switches from the staring line-up which eased past Ulster in their first interprovincial fixture of the Festive period.

Visitors Leinster, backed by a strong breeze, got off to the best possible start when prop Ed Byrne barged over the Munster tryline from close range in the 10th minute, after winger James Lowe created the initial opening with a powerful surge deep inside the '22.

Byrne also added a 23rd minute penalty to increase the holders' advantage to 10 points early in the second quarter.

Munster struggled to gain any territory inside the Leinster half during that opening quarter as the use of box kicks proved ineffective into the strong breeze.

The home side gained very little ground utilising the box kick tactic into the elements.

Munster's discipline was poor too during the opening half an hour and from the concession of their fourth penalty of the half, on this occasion at line-out time. Bryrne duly punished the indiscretion when landing his third successful kick at goal of the evening.

It’s the reigning champs that get the ball rolling

Trailing by 13 points on the verge of half-time, Munster needed to pick up something tangible to take to the dressing room at half-time and it arrived in the form of a 40th minute penalty goal from JJ Hanrahan.

Trailing by 10 points at half-time, wind-assisted Munster needed a quick start to the second half and the home side made an instant impact to the second 40 when Hanrahan kicked his second penalty goal five minutes after the restart when the home side managed to exert a concerted period of pressure on their opponents with some excellent controlled, patient rugby.

Munster did enjoy more territory and possession in the second half as they succeeded in pushing their opponents back with greater regularity. The home side used Rory Scannell's big left boot to keep Leinster hemmed in.

However, a much-changed Munster lacked the guile, craft and cutting edge to unlock Leinster's superb defence.

Leinster have won their last 15 first team matches in all competitions since Saracens beat them in last
season’s Champions Cup Final.

Next up for Munster is a trip to Belfast to take on Ulster in the final interprovincial fixture of the Festive period at Kingspan Stadum on Friday night next, 7.35pm.