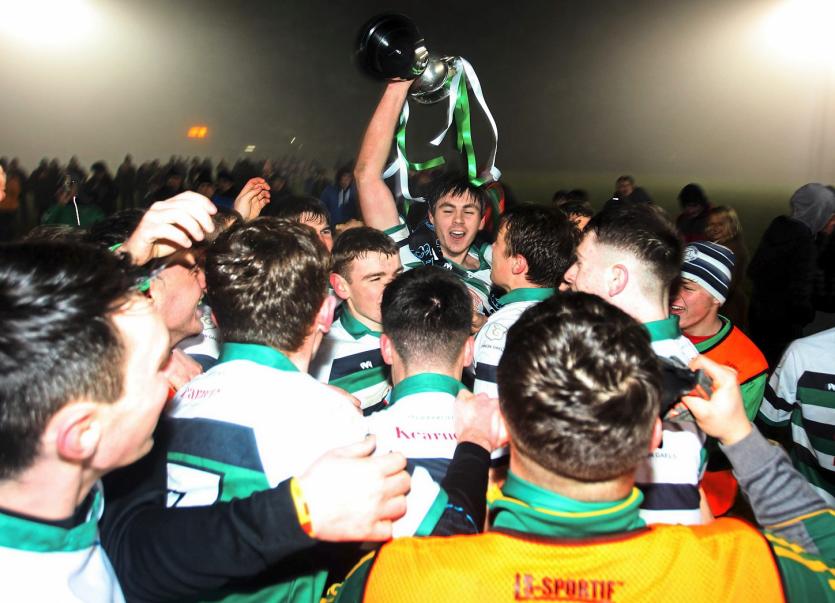 SHANNON GAELS emerged from a heavy Mick Neville Park fog on Saturday evening as U21 ‘A’ football champions. The Glin/Gerald Griffins combination eventually had enough quality to see off a stern test from Ballybricken/Bohermore/Fedamore.

Credit must go to both sets of players who, given the worsening fog, produced an entertaining affair. Throughout the game, it proved difficult to see the many areas of the pitch but the west Limerick club won’t mind, with their strong start to the second half proving the turning point.

Driven forward at every opportunity by centre-forward Karl O’Sullivan, Jack Sheehan found the scoring touch in the second half, with two well taken efforts.

It was Ballybricken who led for long periods of this game. Trailing to an 11th minute opener from Sheagh O’Connor, Ballybricken levelled with a fine point from Jason Cross.

O’Sullivan, who was undoubtedly the 'go to' man for Gaels, found the net in the 14 minute. He drove through the centre before finishing to the net from close range. But this appeared to spark the eventual losers into life.

Jack Cross off his right, found a point, before Darragh O’Keefe and Jason Cross levelled the game by the 20th minute. It got better for the men in yellow, as Niall Mitchell pounced on a loose ball to find the net, Shane O’Sullivan will be disappointed with the concession but his forwards responded well.

Wing forward Jason Mitchell put the minimum between them at the interval, kicking two points in as many minutes at the end the half. The scoreboard read 1-3 to 1-4 in favour of the East Limerick club.

Ten minutes of dominance at the beginning of the second stanza was perhaps where the winners found their platform. Jack Sullivan raised a white flag before Brendan Flanaghan raise two more, Including one from a free. His effort in the 40th minute came off the back of a wonderful Karl O’Sullivan run and pass.

O’Sullivan was causing panic in the Ballybricken defence and had, on 35 minutes set up what looked to be a goal. His run, from the 45 meter line, saw him pass five defenders before hand-passing to Jack Sullivan who punched to the net. This was disallowed by the umpire for a square ball.

Jack Cross reduced the margin to 1-6 to 1-5 on 41 minutes, but his free came out off the post a minute later. He did level the game entering the final quarter, but Shannon Gaels would kick the last two scores.

Jack Sheehan on 47 minutes, had his side ahead down the final few minutes, and a counter attack allowed Flanaghan a routine free with the last kick.

It proved a memorable evening for the young men from Glin and Gearld Griffins, both of whom will be hoping to progress these players into their intermediate teams in the coming years.