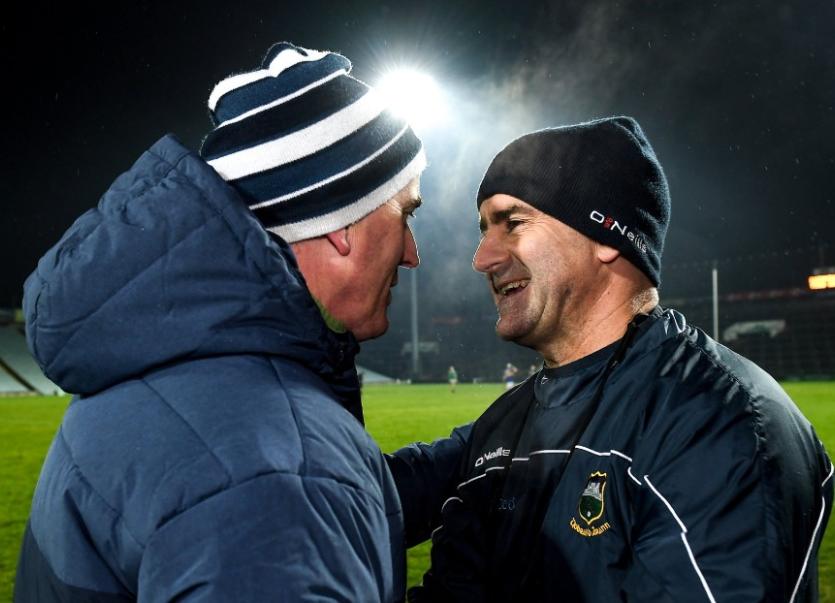 Managers John Kiely and Liam Sheedy at the final whistle

“IT’S day one and there is a long road to be travelled,” surmised hurling manager John Kiely as Limerick opened their 2020 season.

“Not a bad outing,” he remarked as he commenced his fourth season as manager.

“It was our first outing of the year and what do you look for first night out: good attitude, good application and we showed a bit of spirit when it was needed. All told I am happy with the performance and to get guys back on the field,” said Kiely after the Tipperary win

“Listen it’s day one and a good start but we have an awful lot of work to do.”

He explained: “When you are watching these matches, you are watching to see how your players are going to respond when the opposition get a couple of scores - can you regain the ascendancy in the game and it can be very difficult at times but we responded well at key moments in that game tonight and we saw it out well”.

“Clare next and they have a new management team in place and I am sure there will be plenty of energy from that. We will have a look at where they are at and it will be another good opportunity for us to test ourselves against that.”

“Certainly less distractions anyway!” he said of a quieter Autumn and Winter this time round.

“We have had three or four weeks where we had our head down and were working away really hard in training and we have enjoyed that and for the most part we have been lucky with pretty decent weather. We are enjoying our bit of work at the moment and glad to be back on the pitch.”

A crowd of 1628 attended in the LIT Gaelic Grounds – double what had watched Clare beat Tipperary in Nenagh the previous Sunday.

“They (supporters) are very important to us and we have to look after them and when we are at home we have to rock up and perform - all told a good night’s work.”