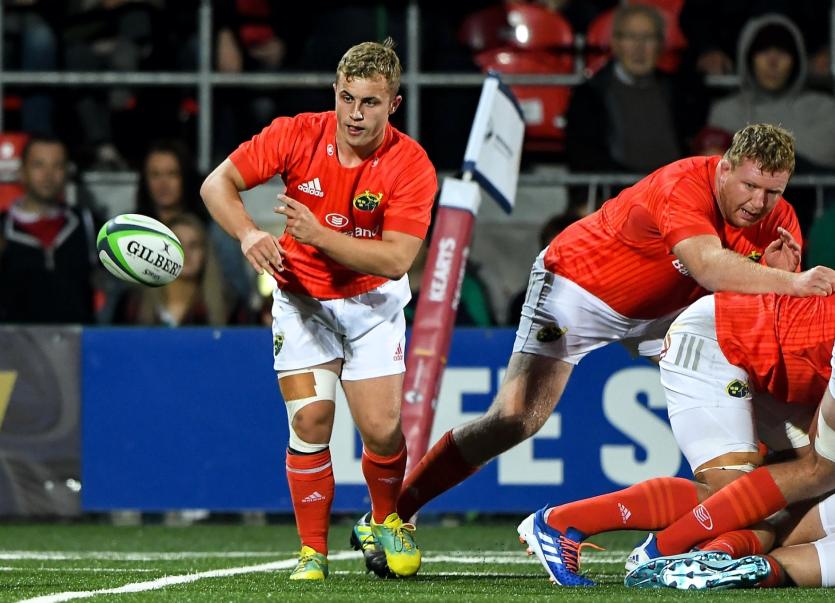 The Munster team to face Connacht in Galway on Saturday evening in the Guinness PRO14 has been named by Head Coach Johann van Graan. There are ten changes to the team that faced Saracens last weekend with Limerick's Craig Casey making his first PRO14 start at scrum-half.

Academy winger Liam Coombes makes his fourth PRO14 appearance and starts alongside cousin Gavin Coombes for the first time in the PRO14. CJ Stander retains his place and the captaincy with Chris Farrell, JJ Hanrahan, Jean Kleyn and Billy Holland also keeping their places in the starting XV.

Shane Daly is named at full-back with Calvin Nash and Liam Coombes on either flank. Dan Goggin and Farrell pair up in the centres with Casey and Hanrahan in the half-backs.

Dave Kilcoyne, returning for his first game since the Rugby World Cup, Kevin O’Byrne and Stephen Archer start in the front row with the second-row partnership of Kleyn and Holland unchanged. Gavin Coombes, Chris Cloete and Stander complete the side.

Garryowen's Diarmuid Barron, Young Munster's Keynan Knox and Garryowen's Ben Healy – who have all featured in the PRO14 already this season – are included among the replacements. Jeremy Loughman returns from injury to take his place on the bench.

Meanwhile Ireland international Quinn Roux will Captain Connacht. With just one point separating the two sides at the top of Conference B, the top of the table clash takes on extra significance for the second row as he is set to make his 100th appearance for the province.

Connacht also go into the game boosted by the news that Tiernan O’Halloran has returned from injury and will start at full back. He is part of a back three with John Porch and Kyle Godwin on the wings.

In the Connacht midfield, Tom Daly has forced his way into the starting team alongside Bundee Aki. While Conor Fitzgerald continues his half back partnership with Caolin Blade, who has now featured in all 11 of Connacht’s games so far this season.

In the forwards, the tight five has a very familiar look; props Denis Buckley and Finlay are included in the starting team as is hooker Dave Heffernan. While Ultan Dillane will line up alongside Roux in the second row.

In the back row Eoghan Masterson and Paul Boyle are named at blindside and openside respectively with Eoin McKeon at number 8. Captain Jarrad Butler has been ruled out due to illness.

Commenting ahead of the game, Connacht Head Coach Andy Friend said: “Saturday is another big occasion in the Sportsground. All players want to be involved in these interpro games and with Munster in our conference it takes on extra significance. We take pride in our home record and last season Munster were one of the few teams to beat us in the Sportsground so we know the challenge we will face tomorrow”.

“It will be a proud day for Quinn Roux and his family. Making 100 appearances for Connacht is a great achievement and it is fitting that with Jarrad out, Quinn will captain the side. He has been a real leader for us this season and has been driving standards among the player group”.