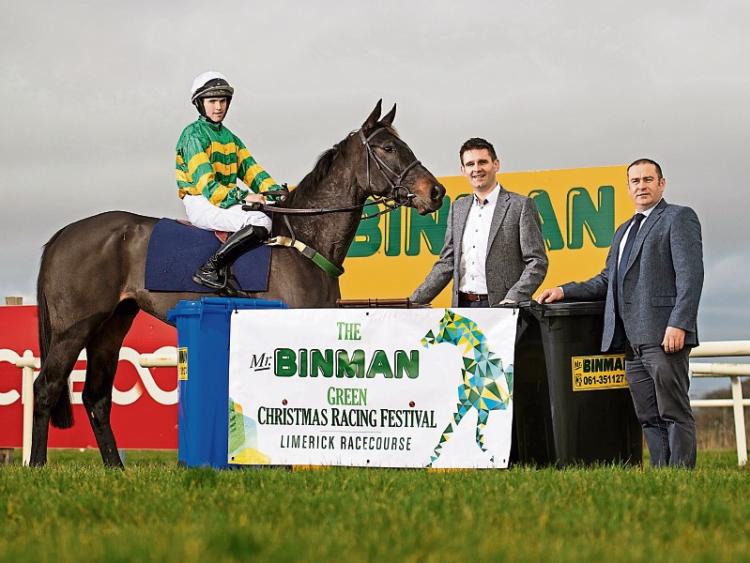 THE Mr Binman Limerick Christmas Racing Festival is the biggest annual National Hunt meeting in Munster and this year's event will be the first green racing festival where all involved have committed to reducing single use plastics.

The four-day horse racing bonanza, which runs from St Stephen's Day until Sunday, December 29, inclusive, at Greenmount Park, Patrickswell, will boast €575,000 in prize money, a 5% increase on 2018 levels.

The event is one of the biggest highlights of the local social and sporting calendar and provides a multimillion euro bonanza for the local economy, through racecourse direct sales, service contractors, bookmakers, hotels, restaurants, transport providers and employment provided.

All 28 races over the four days of the festival are sponsored, while pre-sales of tickets and hospitality packages at Limerick Racecourse indicate that 2019 is going to be one of the biggest yet.

SEVERAL horses which have won at Limerick at Christmas have gone on to enjoy hugely successful National Hunt seasons in both Ireland and the UK, with the likes of Penhill, Faugheen, Martello Tower, Weapons Amnesty and 2019 Champion Hurdle winner Espoir D'Allen, all going on to win at the Cheltenham Festival the following March.

Limerick Racecourse general manager Patrick O'Callaghan said: “We are all really looking forward to the Mr Binman Christmas Racing Festival getting underway. A lot of hard work has gone in to get the festival to this point. The initial planning would have started here last January.

“We are delighted with the way things are shaping up.

“We will have a good cut in the ground for the festival.

“These four days at Christmas are what determines whether the year has been a success or not. The year hinges on Christmas for us.

“It is a time of the year when people are off work, the mobile phones and the e-mails are turned off, people get to sit back and maybe relax a little bit.

“If you know very little or nothing about horse racing, you can still come and enjoy yourself. It is a fun day out.”

AT this point our pre-bookings are as strong as last year. St Stephen's Day is the busiest day of the year for us. The private suites, for example, have been booked out since mid-October.

“The restaurant can accommodate 550 patrons. The Round the World buffet packages are completely sold out for St Stephen's Day, with limited availability in our full restaurant package.

“People can book general admission tickets online from €15 and punter pack tickets are available from €22 per person also. Patrons can also pay at the turnstile on the day.

“We still have availability for December 27, 28 and 29, but it is getting limited at this stage.

“We are seeing a lot of group bookings this year again, sports clubs getting together to enjoy a group day out and racing is a good fit.

“You find a lot of repeat bookings, so if people come on one of the four days, then that is usually their day every year, they bring their group and that's their day out.

“What has been very noticeable last year, I found, was the number of young people in attendance. It seemed to be much higher than in the previous few years.

“One bad morning weather wise, with heavy rain, could see our gate get a pinch. Last year, the weather on the four mornings of the festival was very good. That was a major help.

“We are running a complimentary bus service on all four days departing Henry St each morning and returning to Henry St each evening. The buses will run on a first come first served basis.

“We have worked very closely with Mr Binman, our title sponsor, over the past number of weeks. They are very, very good to work with.

“Look, they are very good supporters of sport in Limerick and are in the heart of the community.

“Mr Binman are involved in the Team Limerick Clean-Up and Munster Rugby as well as with ourselves. They give a lot back.

“It has been very exciting and they have added a lot to us.”

ST Stephen's Day is traditionally the busiest day of the festival, with the opening race due off at 12.25pm.

This year the opening day at Limerick Racecourse will see the second running of the only Grade 1 race to be run in Munster, the €100,000 Matchbook Betting Exchange Novice Chase which attracted a star-studded list of entries, including Fakir D’Oudairies, Samcro, Faugheen and Laurina to name but a few.

The race, which is run over a distance of two miles and three-and-a-half furlongs, will be televised live on RTE, as will the feature race on all four days at the Festival.

Patrick O'Callaghan said: “We are delighted with our entries for our Grade 1. When they came out there were 34 entered.

“There are some very highly rated horses there. That is what you want, we want the superstars coming. A lot of credit has to go to Matchbook too.

“Great credit has to go to the Chairman and the Board of Directors here who had the foresight and ambition to build a new Grade 1 racecourse from a green field site less than 20 years ago and now we have a Grade 1 race to match our facilities.

“It is one of the most highly valued Grade 2s out there and we have aspirations of getting it upgraded to Grade 1 status. In effect, it is a Grade 2 race being run for Grade 1 money.

“Then on December 28, the feature race is the Tim Duggan Memorial Handicap Steeplechase, a Grade B race of €50,000. Our first race that day is due off at 12.30pm.

“Also on that third day we have the Sunways Holidays Most Stylish Lady competition, a firm favourite on the social calendar, with some very good prizes up for grabs there.

“On December 28 also, punters can avail of the special rugby and racing package which ties in with Munster's big Guinness Pro14 fixture with Leinster at Thomond Park that evening at 6pm. Availability is limited, so the advice is to book early to avoid disappointment.

“Our final day of the Festival, December 29, gets underway on the track at 12 noon, while our big race will be Grade 3 Irish Independent Hurdle.

“The race has a value of €34,000 and was won last year of Espoir D'Allen who went on to win the Champion Hurdle at Cheltenham last March.”

COME December 29, some parents with small kids might be getting cabin fever.

“We are doing a special on-line offer for the last day of two adults for €20, with kids U12 free, so it is not an expensive day out.

“Having the feature race live on RTE each day is a good endorsement of what we are doing here.

“The team have worked incredibly hard all year. There is a lot of pulling together with an event this size. The team has put in a huge shift.

“The four days at Christmas fly by when you are working here. Now it is about following through with our plans. We are really looking forward to it.”

U12s can attend the festival for free on all four days when accompanied by an adult.

The Limerick Leader will have a paper again on December 27 and another on January 2.

Happy Christmas to all our readers. #LLSport