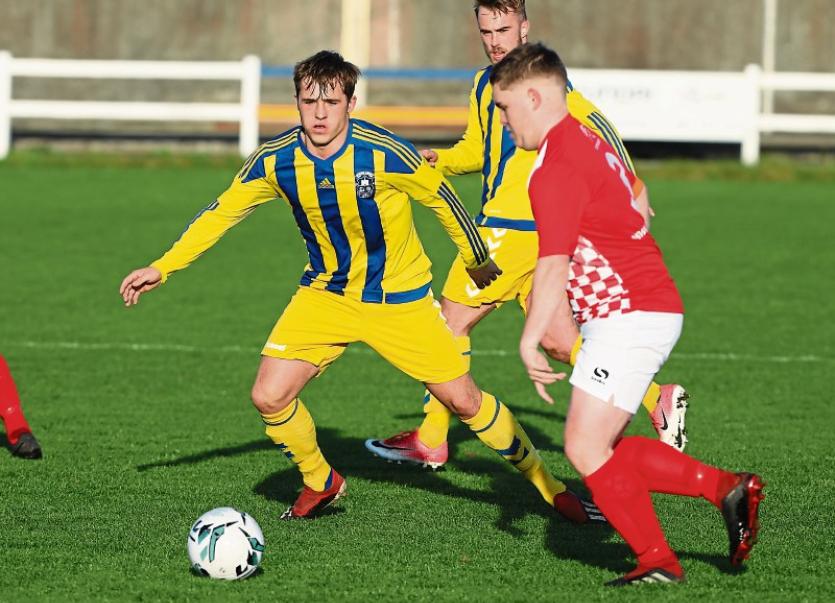 The Christmas break is considered the half way stage for most of the League races across the various Divisions in the Limerick District League and it is usually a good indicator of where the silverware will go come season’s end.

For six of the last seven seasons, the team leading the Premier League (and indeed most other Divisions) at Christmas went on to be crowned champions.

That may be a good omen for Jason Purcell and Stewart Fitzgerald, whose Fairview side lead the way by a point, but the duo are savvy enough to know that there is a lot more football to be played before anyone will take anything for granted.

With the negative vibes emitting from the FAI and Limerick FC’s demise it is good to see that the Limerick Junior Soccer continues to prove one of the most competitive in the country.

In reality Fairview will battle it out with Ballynanty Rvs and Pike Rvs for the Fran Mullally Trophy.

That is to take nothing away from the superb season to date for Geraldines and Regional Utd but you feel they may find the going tougher as the fixtures pile up.

Fairview gave notice last year that things were starting to kick in and they finished the season by capturing the Lawson Cup.

They signed cleverly in the off season and the new additions have gelled in well.

The doubt surrounding Dermot Fitzgerald’s eligibility has gladly been put to rest and his return will boost the side further.

A point behind Fairview lie Ballynanty Rvs who also have improved significantly on last season.

The addition of striker Conor Ellis has been a massive boost with the striker scoring in 12 of his 13 appearances hitting 32 goals in the process.

With so many new players being added to the fold, finding the right balance is the biggest problem facing manager Donal Magee.

They need to figure out their strongest starting XI and build around that as the pressure of the chasing trio means a couple of bad results could end a team’s interest.

Pike Rovers, a point further back have been superb this season, three draws their only blips.

They have not lost a League match since April 2018, an incredible record, and have been in fine form.

Manager Robbie Williams has added numbers to the squad, an issue that affected the side over the last couple of seasons, and they are going to be hard to stop.

Geraldines regrouped over the Summer and have been a revelation. The return of Danny O’Neill was a master stroke while Kevin Barry is averaging a goal a game.

Likewise Regional United. Having lost most of their squad from last season, they were tipped by many to be candidates for relegation but the Dooradoyle club rebuild a neat side and they are playing some superb football.

Aisling have grabbed the headlines this season with the sensational signing of Shane Clarke. The legendary striker, tempted by the offer of a coaching role, has bedded in with his new team mates seamlessly averaging a goal per game.

Level on points with Aisling are Mungret and Janesboro. Mungret Reg are enjoying life in the top flight and play a breezy attacking style of play which is a breath of fresh air.

After a number of years when they were the best in town, Janesboro are going through a painful rebuilding exercise.

They lost the bulk of last season’s title winning squad and manager Shane O’Hanlon is forced to call on all his experience to get the side through this. This is only a blip for Boro who no doubt will be back among the top guns in short time.

The two relegation spots will be fought out between four sides, Kilmallock, Nenagh, Coonagh and Prospect. All four are capable of getting wins along the way do the respective games between the quartet will prove decisive.

We made a disappointing exit at the first hurdle in our defence of the Oscar Traynor Trophy but hopes are high that we can compensate with success at FAI and MFA level.

Limerick’s representatives in the Munster Junior Cup will be Cappamore, Regional Utd A and Regional Utd B, Aisling Annacotty, Pike Rvs, Geraldines and either Fairview Rgs or Athlunkard Villa.

In the lower Divisions there are some great contests going on and I recommend to anyone who restricts their viewing to the Premier League to branch out. While the standard may not be as high, the commitment and exciting will compensate.

We would like to wish a Merry Christmas to all in the soccer world and look forward to the return on January 5th.