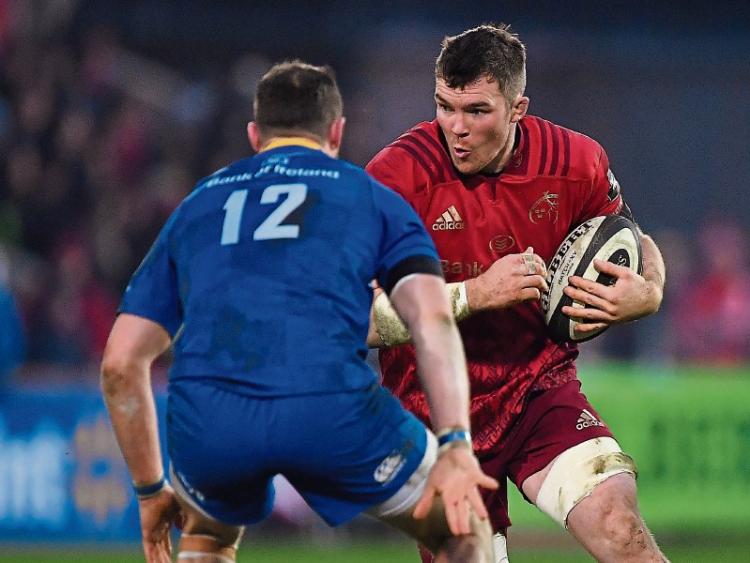 MUNSTER’S big Guinness Pro14 interprovincial clash with Leinster at Thomond Park on December 28 is one of the traditional highlights on the local sporting calendar over the festive period.

The ‘sold out’ signs are already up at Thomond Park for the big derby showdown.

Indeed, match tickets for the Round 9 clash were completely snapped up three weeks in advance of the Christmas clash.

Additional goal-line seating has been installed for the Interprovincial derby to increase the capacity to a record-equalling 26,267.

In recent days it has emerged that Munster will be without their frontline Ireland international stars for the visit of reigning Pro14 champions Leinster on Limerick on December 28.

It is not the first time it’s happened. However, last season both provinces fielded pretty much full strength sides at Thomond Park for their now traditional Christmas showdown and the game turned into a feisty affair with Munster emerging victorious on a 26-17 scoreline.

It was only the second time in nine meetings that Munster had managed to turn over their arch rivals in a competitive fixture. Since then, of course, Leinster regained the bragging rights when the provinces faced-off in the semi-final of the Guinness Pro 14 at the RDS.

Munster also ran out 34-24 winners in Limerick in 2017, a victory lit up by Jordan Larmour’s stunning solo try.

Twelve months earlier in 2016, Munster defeated an under-strength Leinster 29-17 at Thomond Park to extend their lead at the top of the then Guinness PRO12 to five points.

The IRFU's player welfare programme has prevented the provinces from fielding the vast majority of their Ireland internationals in several of the big interprovincial fixtures over the Festive period.

In recent seasons, the provinces, when given the option, have tended to field their strongest possible line-ups for their home fixtures over the Christmas and New Year’s period and mix and match then for the away games.

Munster’s schedule of interprovincial fixtures over the coming weekends see Johann van Graan’s side lock horns with Connacht in Galway this Saturday, 5.15pm, before that home clash with Leinster on December 28 and finally a date with Ulster in Belfast on Friday, January 3.

Ireland’s World Cup players are required to rest for two consecutive weekends over the upcoming festive run of inter-provincial derbies.

As a result, Munster look set to be minus their Ireland stars who featured at the World Cup against both Connacht and Leinster.

Such a scenario would allow Munster field a strong line-up for the New Year’s away date with Ulster which comes just nine days before the province’s crucial Heineken Champions Cup clash with Racing 92 in Paris.

So how do Munster fans who bought tickets for the Leinster game on December 28 and now know that the home side will not be at full strength for the game feel? Do they feel short-changed?

History has suggested that there is a chance Munster will not be at full strength for this game given when it falls on the fixture list.

For a good chunk of supporters it is all about the result and the opportunity to put one over on their greatest rivals.