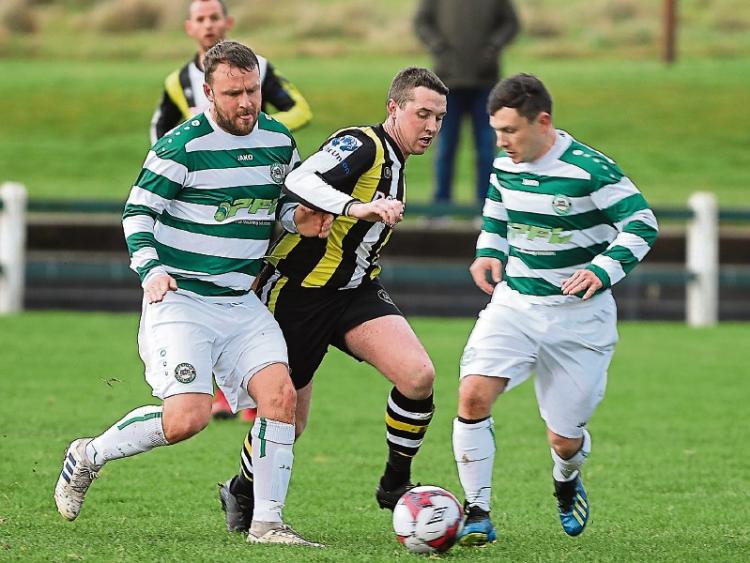 ASKEATON HOT ON THE HEELS OF LEADERS ST. ITA’S

Askeaton affirmed their title credentials with a 4-3 victory away to reigning Champions, Broadford United, on Saturday. Niall O’Connor (2), Tomas Sheahan and Joey Rushe were on the mark for Askeaton, while a Jamie Keane brace and a Conor Stack penalty accounted for the Broadford goals. Askeaton are now just three points behind leaders St. Ita’s, with a game in hand.

The top two have both dropped just three points so far this season and that is also the case with Ballingarry, who came from behind to win 2-1 in the derby game at home to Granagh United, whose opener came from a free-kick on the half-hour. David Geary equalised soon afterwards and he went on to score the winner in injury-time.

Newcastle West Town recorded their first league win at the fifth attempt when they got the better of hosts Pallaskenry on a 2-1 scoreline. Newcastle West led 2-0 at half-time and Adam Collins pulled a goal back in the 85th minute.

GLIN TIPPED TO EDGE PAST GRANAGH

It is unusual for the fixture list to consist of just one game but that’s the case next Sunday when Granagh United and Glin Rovers meet in the third round of the Munster Junior Cup. The tie between Abbeyfeale United and Rathkeale will take place on the 12th of January.

Granagh United are through to this stage by virtue of their 3-2 extra-time victory at home to Broadford United in the second round. Dan Shelton scored the opener in the first minute and the winner in the last minute of extra-time and he will be a key player on Sunday as he has the ability to open up defences with his penetrating runs. Granagh hope to have Stephen O’Brien back from injury and they will also be able to include new signing, Eoin Clifford

Glin Rovers reclaimed their place as joint leaders of the Premier Division with their 2-0 victory at home to Ballingarry in their last outing three weeks ago. They won’t be at full-strength as Gary Kelly will be missing along with their u-20 footballers, while Ed Horan and Darren Sheehan are also doubtful.

While not being at full-strength gives me cause for concern, Glins’s record of conceding only two goals in four league games is impressive and that defensive solidity could prove to be the foundation for another narrow victory on Sunday. The winners will be away to Doolan’s Cow of the Cork Business and Shipping League.

Newcastle West Town found the step-up in class to be too much for them when they visited Pike Rovers in the fifth round of the FAI Junior Cup on Sunday, beaten 5-1.

It was always going to be hard for the visitors once Pike established a foothold in the game with two goals in five minutes to lead 2-0 by the 17th minute.

The first goal came from a corner, Eoin Hanrahan’s delivery from the right reaching Robbie Williams who headed the ball onto Jonathan Grant, who headed to the back of the net from close range. Williams was also involved in the second goal, winning the ball back in his centre-half position with a strong tackle and then releasing the impressive Shane Walsh on the right. Walsh passed to the equally impressive Steven McGann, who squared for Hanrahan to fire to the roof of the net at the far post from six yards.

Newcastle West’s best moment of the whole game came in the 20th minute when Scott Hurley brilliantly fired inside the left-hand post from a 33-yard free-kick, awarded after Sean Cronin was brought down as was cutting through the heart of the Pike defence.

Pike regained their two-goal advantage in the 32nd minute from another corner, Williams heading powerfully to the net from Walsh’s delivery from the left.

Pike put the issue beyond all doubt with two goals in three minutes towards the end of the third quarter. Keith Mawdsley was on the pitch less than a minute when he drilled home from 20 yards after Newcastle West had lost possession from a throw in their defensive third. Mawdsley then turned provider for the game’s concluding goal, crossing to Walsh, who skillfully brought the ball down and squeezed his 14-yard shot inside the left-hand post.

While manager Noel Murphy and the players will be disappointed at the heavy defeat, it could prove beneficial if they use Pike’s quality as a benchmark to aim towards. The Limerick District played at a fast pace throughout and showed great awareness of what was around them, getting off passes so quickly that is was difficult for Newcastle West to close them down. They have to be rated as genuine contenders to win the trophy outright for the first time since 2011.

Rathkeale also went down to a comprehensive defeat on their FAI Junior Cup travels, beaten 4-1 by Rush Athletic in North County Dublin. Rathkeale were very much in the contest at half-time against the leaders of the top flight of the junior section of the Leinster Senior League, level at 1-1 after Steven Power had cancelled out the home team’s opener. However, Rush scored three unanswered goals in the second-half to record a 4-1 victory.

The defeats for Rathkeale and Newcastle West Town mean that it is left to Carrig Celtic to fly the flag in the sixth round. They will be away to Newpark FC on the weekend of the 11th/12th of January. Newpark play in the Kilkenny League.

Regional Utd “B” v Macroom “A”

The Weekly Award this week goes to Askeaton Youths, who moved into title contention in the Youths League with a 4-3 victory away to reigning Champions, Broadford United. Askeaton will go into a draw with the other Weekly winners at the end of the season for vouchers to the value of €150, €100 and €50, sponsored by Chris McGill of adrenalinsports.ie, Newcastle West.

The Limerick Desmond League would like to wish a Happy Christmas and a Happy New Year to all our clubs, supporters, referees, sponsors and media outlets, especially to this newspaper for providing such great coverage during the year.