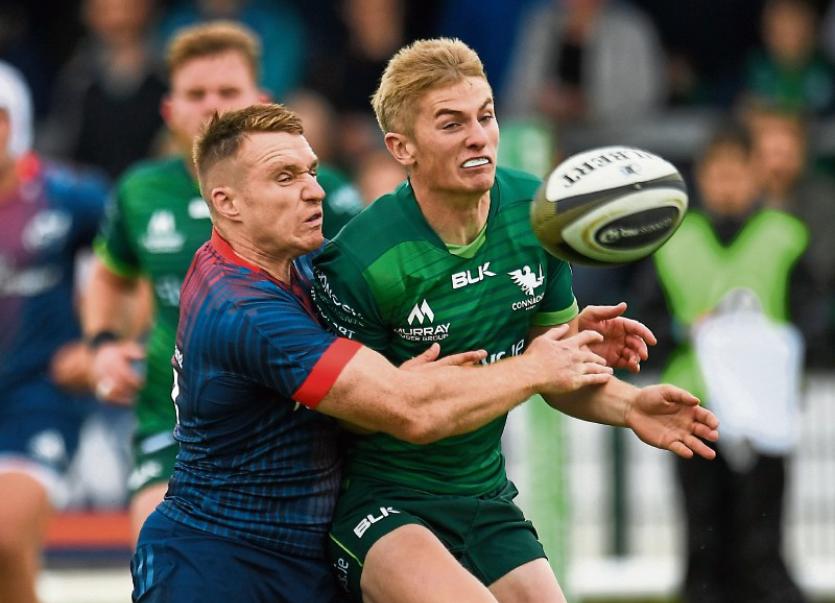 MUNSTER head into the West this weekend for a crucial Guinness PRO14 date with Connacht, the first of three big interprovincial fixtures over the Christmas and New Year period.

Munster’s look set to field a much-changed side for Saturday’s clash with Connacht at the Sportsground, 5.15pm, to the one which lost out to Saracens in a bruising Heineken Champions Cup pool fixture at Allianz Park.

With Ireland’s World Cup players required to rest for two consecutive weekends over the upcoming Christmas and New Year’s run of inter-provincial derbies, Munster look set to be much-changed for their games with Connacht and Leinster, while fielding a strong line-up for the make-or-break Heineken Champions Cup away date with Racing 92.

Munster confirmed this week that captain Peter O’Mahony, who was ruled out of Saturday’s defeat to Saracens during the warm-up, sustained a low grade abductor injury.

Tadhg Beirne, who sustained an ankle fracture in the opening ten minutes, now requires surgery, and is facing several months on the sidelines.

John Ryan was forced off with a calf strain in the opening half against Sarries’, and the prop will undergo his rehabilitation with the medical department, while winger Andrew Conway departed for a HIA in the second half, and will follow return to play protocols.

Saturday’s derby in Galway is a crucial Pro 14 fixture for Munster. The winner of this clash could well be sitting atop Conference B come the end of the weekend.

Just a point currently separates first-placed Munster from second-placed Connacht and in a conference where there are just four points between the top four, every game counts.

Connacht come into Saturday’s game on an back of a thrilling come-from-behind home victory over Gloucester Rugby in the Heineken Champions Cup last weekend.

Andy Friend’s side boast an excellent home record as their Pro14 loss to Leinster earlier this season is their only home loss in any competition since January.

Connacht have won three of their last five meetings with Munster at The Sportsground.

Munster have won just one of their last four matches in all tournaments, a 10-3 success at home to Saracens in Round 3 of the European Champions Cup.

Connacht Rugby confirmed this week that they will be installing additional temporary terracing in the Sportsground for this weekend’s interprovincial fixture.

Connacht say the decision has been taken due to the high volume of ticket sales and will increase the capacity to a maximum of 8,129.