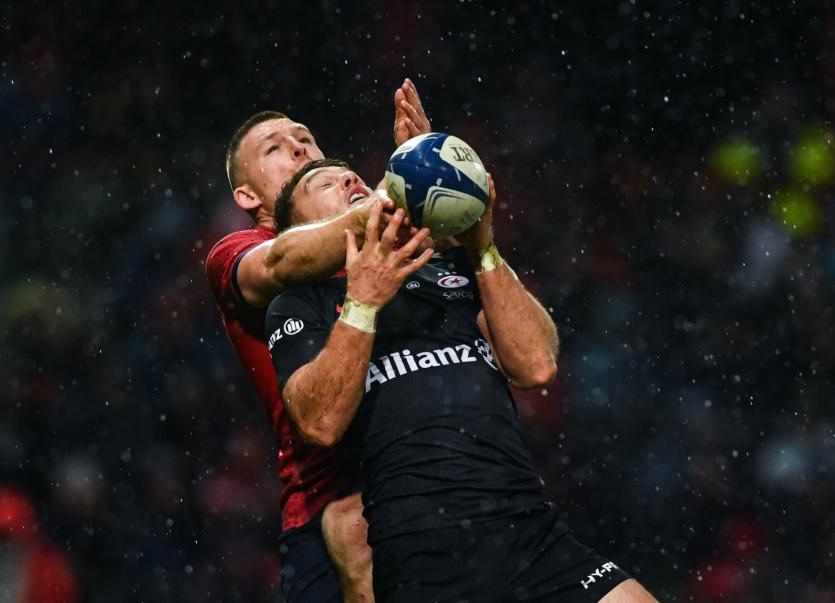 The Munster side has been named for Saturday’s Champions Cup clash away to Saracens at Allianz Park (3pm). There is one change to the side that defeated Saracens last week as tighthead prop John Ryan comes into the starting XV to make his 150th appearance for the province.

Mike Haley, Andrew Conway and Keith Earls are named in the back three with Rory Scannell and Chris Farrell continuing their centre partnership.

Conor Murray and JJ Hanrahan are in the half-backs with James Cronin, Niall Scannell and Ryan packing down in the front row.

The second row pairing of Jean Kleyn and Billy Holland are unchanged along with the back row of Tadhg Beirne, captain Peter O’Mahony and CJ Stander.

Dan Goggin and Tommy O’Donnell have been drafted into the replacements, taking over from Sam Arnold and Arno Botha respectively, with Goggin set to make his 50th Munster appearance.

Nick McCarthy is in line to make his first Champions Cup appearance for Munster.

Meanwhile Max Malins and Joel Kpoku have been named in a Saracens starting XV for a Heineken Champions Cup fixture for the first time.  Academy graduate Malins has had a long road back from injury and starts at full-back and lock Kpoku takes the four jersey after featuring from the bench in all three of Sarries’ 2019/20 pool matches.

The duo are two of 20 players that are English qualified in the Men in Black’s match day 23, with seven England internationals having been at the club for seven or more years.

Number 8 Billy Vunipola is back in the Saracens fold and partners Ben Earl and Nick Isiekwe in the back row. The two 21-year-olds made their 50th and 75th club appearances respectively last time out.

Mako Vunipola and Jamie George return to the front row alongside 2019 Rugby World Cup winner Vincent Koch while George Kruis links up with Kpoku in the boiler room to complete the changes in the pack.

Fresh from making his 100th outing for Saracens, Alex Lozowski is joined by Nick Tompkins in the centre and inside them will be half-backs Richard Wigglesworth and Owen Farrell – the latter captaining the side.

Elliot Daly switches to the wing for the first time at Allianz Park and Sean Maitland takes a spot on the other flank to complete the back three.

On the bench, Tom Woolstencroft and Calum Clark are back from injury.