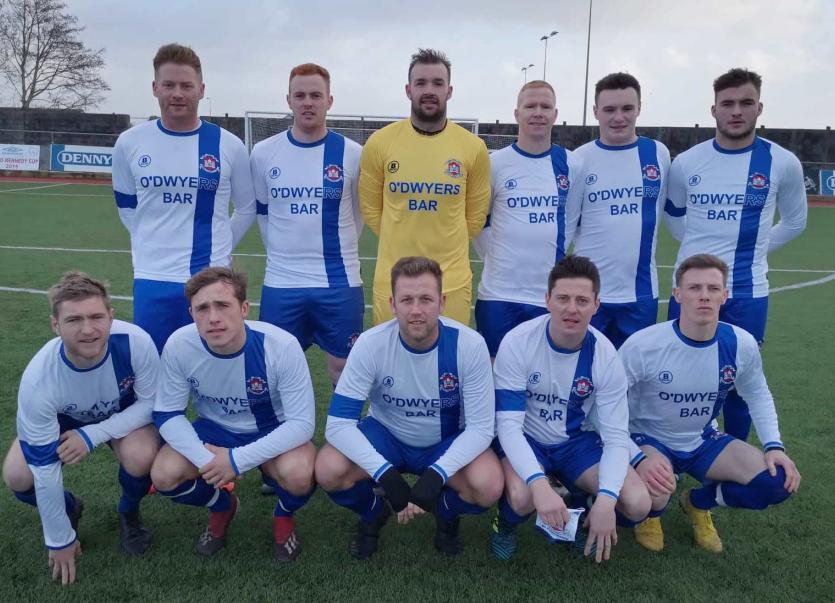 Limerick’s hopes of retaining the Oscar Traynor trophy were dashed on Sunday when in wins swept condition's they fell 4-3 to the Kerry League.

In a disappointing group campaign Limerick lost two of their three games and paid the price.

However they did not go without a battle that saw them chasing the game after falling two goals down at the break.

They had the game tied at 3-3 when the hosts broke to snatch a late winner.

Limerick started the tie well and had efforts from Kieran Hanlon and Keith Mawdsley but both were dealt with capably by Steve Bartlet in the Kerry goal.

The home side took the lead midway through the opening half when Stephen O’Mahoney launched a ball forward and Matt Keane’s flick on caught the Limerick defence flat footed as Ashley Kelliher raced in to beat the advancing Gary Neville.

Keane went close to adding to the lead minutes later but his shot across the face of goal was inches wide.

With the home side well on top it was no surprise when goal number two arrived ten minutes before the break.

A cross from Kevin O’Sullivan picked out Kelliher and he drew two defenders before Wayne Spartling through to double the lead.

Limerick’s half time team talk had the desired effect as they had a goal back within two minutes of the restart.

Danny O’Neill crossed for Thomas Clarke who had a shot block and the Referee pointed to the spot for hand ball. Shane Clarke stepped up to score the resultant penalty.

Two goals within two minutes followed. First, Kerry restored their two goal advantage when William Courtney’s cross-cum shot with the wind behind it found the net but within a minute Danny O’Neill’s cross was knocked on by Shane Clarke and Kieran Hanlon netted from six yards.

Limerick continued to boss the game and got back on level terms with 18 minutes to play. Good work by AJ O’Connor put O’Neill away on the wing and his delivery was met by the inrunning Clarke for his second of the afternoon.

With the game evenly poised it was Kerry who got the break with four minutes remaining. Kelliher’s shot was saved by Gary Neville but Courtney, following up, tuck away the rebound to put Kerry through.

To wrap up a bad day for the Limerick sides, the Youth team, under the guidance of Martin Sugrue were starting the defence of their title against the Kerry League and things looked to be going to plan until the elements played their part.

But minutes into the second half a gust of wind blew the cover off the floodlights onto the pitch, forcing the Referee to abandon the game, citing player safety.

Speaking of player safety one wonders why the those responsible did not make a call to postpone these ties considering there was a severe weather warning in Kerry.

Nenagh AFC A returned to winning ways on a rain swept Thursday night in Jackman Park beating Prospect Priory by 6 goals to 2.

In general the game was a very well contested affair , the difference was a blistering opening quarter by the Tipperary side that saw them chalk up a four goal lead. Thereafter it was an even affair but the damage was done.

Both teams went into the tie short a few regulars but Nenagh were out of the traps like lightning and took the lead within three minutes courtesy of Fran Munsterberg.

The lead was doubled when man of the match Luke Kennedy' delivered a corner  that was finished by Ciaran O'Reilly.

Any hopes Prospect  had of getting back in the tie were quashed midway through the half when keeper Darren Glasheen saw red for a professional foul and to make matters worse O'Reilly fired the resultant free kick to the back of the net.

Kennedy scored the first of his hat trick to make it 4-0 before Trevor Hogan pulled one back for Prospect.

Kennedy eased Nenagh nerves with a beauty from 25 yards to make it 5-2 and wrapped up a fine performance by scoring the final goal from the penalty spot.

In the McGettigans Premier A League Charleville moved to within a point of inactive leaders Moyross following a super comeback to beat Hill Celtic at the Cork venue on Saturday evening.

Celtic, also with designs on promotion, looked like making a statement to the chasing pack when goals from Danny Sheehan and Dean Mitchell had them two goals to the good on the hour mark.

However the home side woke from their slumber for the last half hour and ran in four goals to record a memorable win.

Hero of the night for Charleville was Darren Casey who bagged a hat trick. Mark Kavanagh was also on the mark.

Newport also consolidated their challenge for a place in the top flight when their 6-1 over Aisling sees them sitting two points behind Charleville with a game less played.

Brian O’Sullivan scored a hat trick for the winners while Dave Ryan, James Lynch and Colin Coleman also got in on the act.

Following a superb 5-0 win over leaders Moyross last week, Fairview B were brought back to earth when held to a 2-2 draw by bottom side Corbally Utd.

Two goals Dermot Hughes had Corbally in control and despite finishing with nine men, Fairview fought back to earn a share of the spoils courtesy of a brace from Kieran Long.

Division 1A leaders Castle Rovers scored a vital 2-1 win over Knockainey to keep the chasing pack at bay.

Goals from Craig McNamara and Des O’Donoghue sufficed for Castle while Cathal Hayes netted a reply for Knockainey.

Hyde Rgs paid the price of missing a few players as they fell 4-1 at home to second placed Kilfrush. Dylan Bourke scored for Hyde but a brace from Ethan Butler and one each for David Hannon and Tyrique McNamara secured the win.

Star Rvs proved too strong for Granville and Joe Keane (2), Alan Keane, Henry Metting (2), Glen Bussoli, Adam McInerney and Alex Kelly were all on target for the winners.

In Division 1B Aisling C beat Parkville to join them in second place on 20 points. Conor Linehan, Bryan Sheehan and Niall Loughran netted for the winners. Craig Madigan scored twice for Parkville.

Pallasgreen are just a point behind following their 2-0 win at Athlunkard courtesy of goals from Mickey Gammell and Duane O’Carroll.

The Open Cup continues apace with some impressive displays at the weekend.

Coonagh B got the better of Murroe in a seven goal game. Billy Connors scored twice while the evergreen Aidan Ryan and Sean Kelly made up Coonagh’s tally. Jake Shanahan, Shane Quigley and Jay Ryan replied for Murroe.

Nenagh advance following a 2-0 win at Mungret. Connie O Reilly and Cillian Fitzpatrick scored for the Tipperary side.

Rioghan Butler’s goal saw Parkville B to an impressive win over a fancied Caherconlish XI.