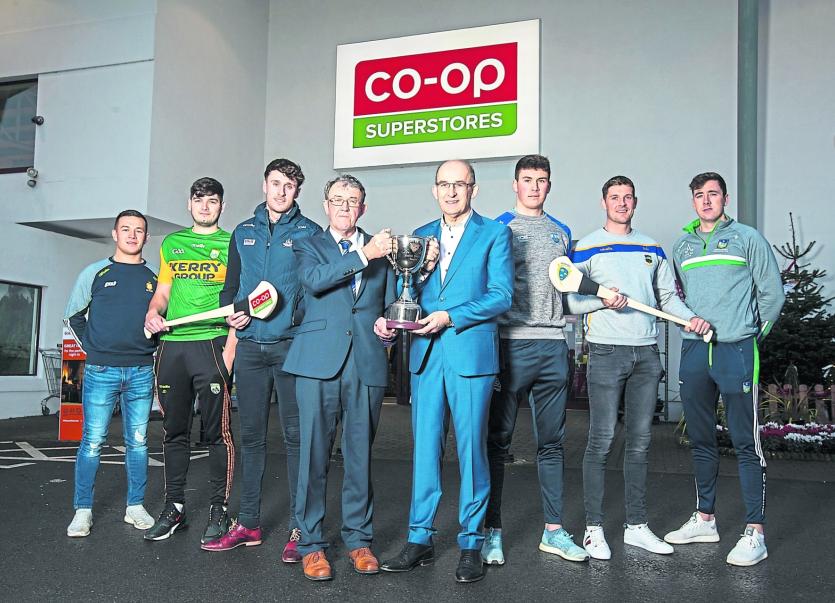 At the launch of the Co-Op Superstores Munster Hurling League were Chairman of Munster GAA, Liam Lenihan and Jim Woulfe, CEO of Dairygold and inter-county hurlers representing all Munster counties

MUNSTER GAA and Co-Op Superstores have once again teamed up for the 2020 Munster Hurling League.

Limerick will play both sides - Tipperary coming to LIT Gaelic Grounds on Friday December 20 at 7.30pm and then on Sunday January 5 Limerick travel to Sixmilebridge to play Clare.

The launch took place at Co-Op Superstores in Raheen, Limerick which is the flagship store in Dairygold’s retail network.

“I am delighted that once again, all six counties will participate in the 2020 Co-Op Superstores Munster Hurling League. The Munster Council is pleased to facilitate this competition for our counties as it provides participating teams with a great opportunity to prepare for the very competitive Allianz League," said Munster GAA Chairman Liam Lenihan.

"Thanks to Co-Op Superstores for their continued support as competition sponsor and we look forward to working with them in the weeks ahead," said the chairman.

Speaking at the launch, Jim Woulfe, Dairygold CEO said they were "very pleased to join forces once again with Munster GAA in what is a most exciting and competitive era for hurling in Munster."

"Through our network of retail stores and our online store coopsuperstores.ie our business is connected with the GAA across all communities. Supporting Munster Hurling is a natural fit for Co-Op Superstores and Dairygold," said Jim Woulfe.