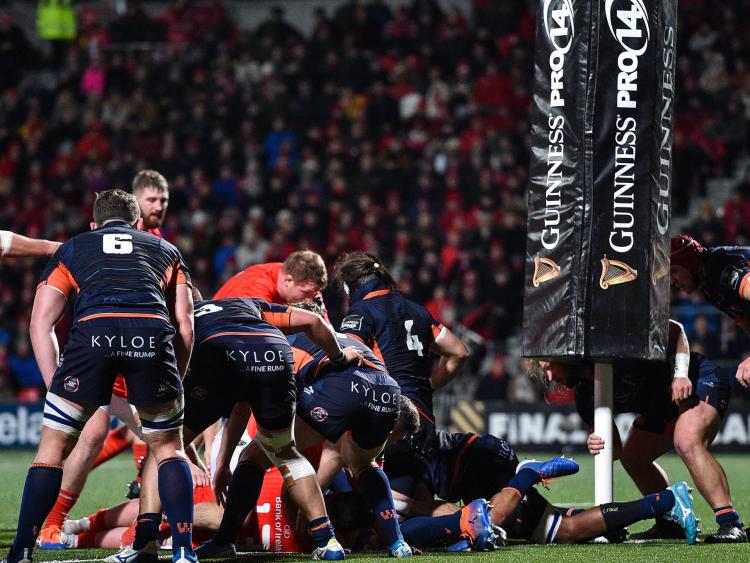 Two Edinburgh players began lifting the protective padding around their own goalposts as Munster pounded their tryline in the 35th minute of the game.

A 23-phase movement did end in a try for Tommy O’Donnell, but stand-in Munster captain Jack O’Donoghue brought the incident with the padding to Italian ref Mitrea's attention. However, the official let the Scots off with a warning issued through their captain.

Munster suffered their first home defeat in almost two years as a much-changed home side suffered a 16-18 reverse at the hands of Richard Cockerill's side.

Afterwards Munster head coach Johann van Graan said: “Look, in my view you cannot touch the goalposts, it's the safety of the game.

“You pull that up, there has been another incident in World rugby where that was a yellow card and a straight penalty try. We have to keep with the values on the game.

“I am not going to comment further on it, but safety is paramount. Someone hits the goalposts there and something happens to them, really frustrating.”

Van Graan said of former Glenstal Abbey Schools Senior Cup winning captain and current Garryowen clubman Healy: “His first game at this level. He’s been training with the senior squad since the start of preseason and he went to the Champions Cup games and we warmed him up.

“Like I said at the beginning of the year it’s important we don’t just throw fellas in. You have got to throw them in at the right time.

“You had JJ (Hanrahan) and Rory (Scannell) the whole week guiding him through it. I was impressed with his goal-kicking and straight after half-time to slot that kick to go 13-10.

“I think that’s the secret, you have got to make your squad work and I’m very glad that we are backing our squad."