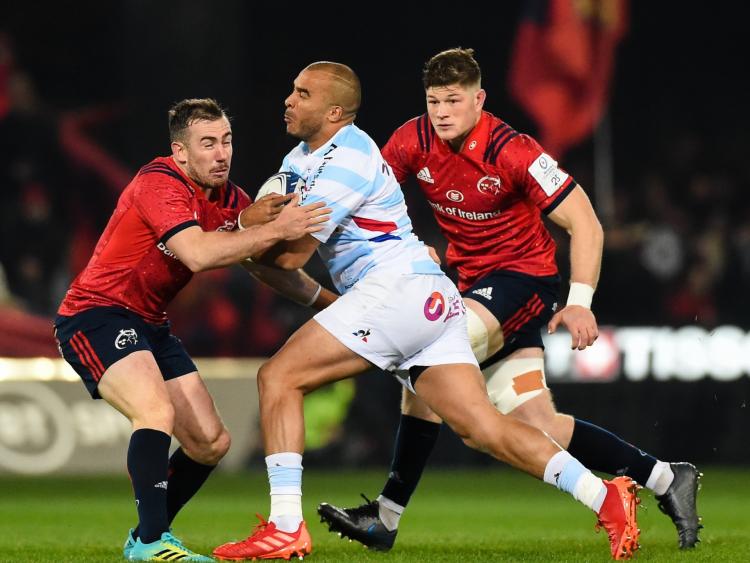 MUNSTER secured a thrilling 21-21 draw with Racing 92 at Thomond Park on Saturday night to keep their hopes of reaching the knock-out stages of the Heineken Champions Cup very much alive.

However, it took a late try from Andrew Conway, superbly converted from the touchline by JJ Hanrahan in the 75th minute to prevent Racing from becoming only the second ever French side to win in Limerick in the Heineken Cup.

Indeed, Munster could have sealed an unlikely victory right at the death, but Hanrahan pulled a drop goal attempt from inside the Racing '22 left and wide.

Munster hit the front inside eight minutes when out-half JJ Hanrahan landed a penalty kick from well outside the '22.

Back came the French visitors, however, and Scottish out-half Finn Russell scored a smashing individual try on 18 minutes when he collected his own neat grubber in behind the Munster defence to score.

Scrum-half Teddy Iribaren, a late replacement for Machenaud, duly slotted the extras, for a 7-3 advantage to the Top 14 side.

Hanrahan reduced Racing's lead to a single point with his second penalty goal, before the French side struck for their second try through winger Teddy Thomas after half an hour. The conversion saw the visitors into a two-score lead at 14-6.

Ooooh what a pass from JJ Hanrahan!

Munster fight back and draw level with a beautiful try through Andrew Conway!

Resilient Munster hit back and came oh so close to notching their first try in the 35th minute, but out-half JJ Hanrahan lost control of the ball tantilisingly close to the tryline.

Munster did score their opening try just before half-time when Keith Earls finished superbly in the left corner, fending off Smon Zebo's attempted tackle to score.

Hanrahan was narrowly off target with his conversion attempt as Racing tool a three-point lead, 14-11, to the sheds at half-time.

The home side dd draw level with the French visitors in the 48th minute when Hanrahan landed his third penalty for 14-14.

The cheekiest of grubber kicks, and a NUTMEG too?!

A moment of pure brilliance, what a try! #HeinekenChampionsCup pic.twitter.com/hYJuAm2AOX

However, the Munster players were back behind their own sticks deep in conversion two minute later when a terrific break from Russell sent Juan Imhoff in under the posts.

Iribaren converted and the Parisiens now led 21-14. Racing continued to monopolise territory and possession throughout the third quarter, but failed to add to their half-time advantage.

Keith Earls is a ruthless finisher

He leaves his good mate Simon Zebo in his wake as he bags a vital score for Munster just before half time!#HeinekenChampionsCup pic.twitter.com/UlwrkBbAM3

And despite clinging on by their finger nails, Munster found a way to get themselves back into the game late on. Following a period of pressure insider the Racing '22, replacement scrum-half Alby Mathewson on his final appearance for the province before his departure for pastures new brought renewed energy off the bench and Hanrahan threw a terrific skip pass out to winger Andrew Conway who scored from close range.

For good measure, Hanrahan nailed the touchline conversion to tie the scores, but was off target with that late, late drop goal attempt.