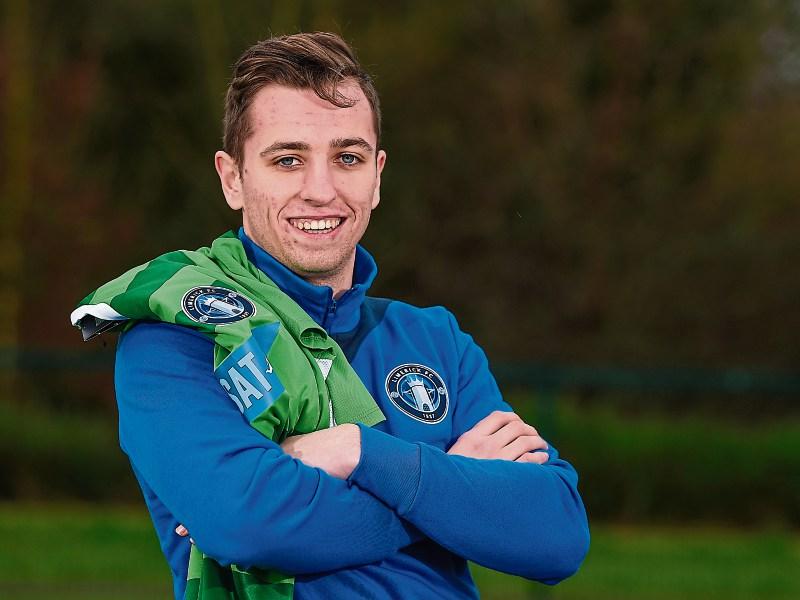 Former Limerick FC striker Connor Ellis is eager to return to the League of Ireland in 2020, and he hasn’t ruled out a return to the club even after his departure mid-season due to non-payment of wages.

Ellis says he has no ill-feeling towards Limerick Chairman Pat O’Sullivan and feels that if the club sorts itself out financially, he could end up back at the Market’s Field next season.

However, following the Independent Club Licensing Committee’s decision to deduct the club 26 points for appointing an examiner to the club, Ellis might reconsider.

The 22-year-old from Kealkill in Cork had a tough time when he initially signed for the Blues, as an accumulation of injuries meant he didn’t quite hit the heights he thought he would, after his arrival from newly crowned Premier Division Champions Cork City.

Ellis said, “I got a couple of bad injuries. I missed 3 or 4 months, and to my own admission I probably didn’t hit the heights that I wanted to. I was still young, but I think I put a lot of pressure on myself my first year leading the line. At Cork I was only ever getting 10-15 minutes.”

In the end Limerick found themselves relegated, losing the playoff to Ollie Horgan’s Finn Harps. Ellis could have left the club at the end of the season but he felt he had unfinished business, “It didn’t quite go how I wanted it to, but in the off-season it kind of made me go and pull my sleeves up a bit more.

“I put the work in and even though the club went down, as players we felt it was partly our fault. So rather than maybe trying to push to get another Premier club I wanted to be fair to, particularly Tommy (Barrett) and the club, and say right I’ll stick with them in the First Division and really show what I can do and hopefully we could go back up.

“I met Pat (O’Sullivan), talked it through and I agreed off my own bat to take a pay cut to try and help the club, because everyone was aware of the rumblings about the financial stuff. I did that on the basis that my money would be guaranteed, which you shouldn’t even have to ask as a player. I took the pay cut and got a part-time job to make up the difference, in terms of paying my rent and stuff” he added

“It all started well; I had a good pre-season. My hip didn’t flare up at all, I was playing every week. I scored a few goals. If I wasn’t scoring, I was setting up goals and certainly creating chances. I felt that I was starting to fulfil my potential a small bit.

“As we got into March, there was a couple of rumblings, the wages were a bit late. Then there was a kind of knock-on effect, every month that went past it got worse. You get paid monthly and you’re waiting 3-4 weeks for that money, so you’re waiting 8-9 weeks within pay checks.” admitted a frustration Ellis.

“Nobody in the League of Ireland, particularly in the First Division, is on big enough money to allow that. It’s tough enough going month to month. It just got to a stage where it was going on so much.

“First of all, it was taking the enjoyment out of it, because you’re stressing about bills. Then it got to the stage where if I didn’t act, then having to take on more hours at work, I couldn’t have been able to pay my rent and have to go back to Cork. I might be young, but at 22 you don’t want to be asking your parents for money. So, I bit the bullet and left.

“I was lucky enough that I was working up the road in Stats (the worldwide leader in sports data, based in Henry Street, Limerick) and they’d been very good to me. I miss the football, of course, but I felt my hand was forced a bit.”

Ellis admits he could have stayed in the ‘league’ but decided that is was not the right time.

“I could have stayed in the league and struggled to live, struggle to get by, but you’re never going to perform if you’re worrying about the financial side of it. Unfortunately, that was the position I found myself in. I took the extra hours at work and said I’d take a 6-month break and hopefully look to go back in January.

Ellis didn’t leave the game completely, as he joined up with local Junior side Ballynanty Rovers to stay fit.

It’s a decision he’s been happy with, “Ballynanty came up, more because I need to stay fit and be playing games. You can do any amount of gym work but it’s not the same. It’s not the same standard as the LOI but there still is some very decent players in the league, a lot of ex-LOI players. For the time being it’s keeping me ticking over.

“I still have the drive to play in the League of Ireland. I think I’m good enough to play in the Premier Division. Maybe I didn’t quite show that at Limerick, but I think I was certainly showing it this season. I think I ended up as the club’s joint top scorer and I only played half the season. In the end it wasn’t a bad half a season for me”

When asked what the future holds for him in terms of returning to the League. He said, “I’ve spoken to a few managers, but the next move for me is very important because I’ve had a couple of years of training, getting 10-15 minutes at Cork and then coming to Limerick and all the money problems. I still have the appetite for it and I still want it as much as ever, but the last year has kind of taken away the enjoyment of it.

“It’s been nice to have a couple of months break. Little things like, I’ve been over to England to see my father’s side of the family, stuff that you can’t do when you’re training full time. It’s nice to refresh but I am ready to get back. At the moment I’m just giving my all to Ballynanty and trying to score as many goals as I can because if you’re scoring every week it’s keeping your name out there and in the paper.”