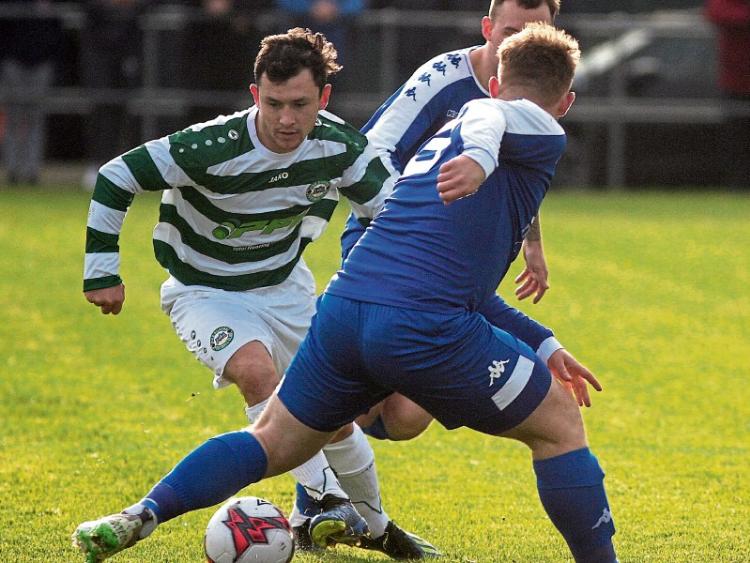 This weekend most attention will be on the Premier League, but there is one Munster Junior Cup game down for decision when Pike Rvs welcome Kilmallock to the Pike Club chasing a place in the open stages of the Provincial tournament.

The Premier side were very good last weekend when they defeated Ballynanty Rvs in the FAI Junior Cup and player manager Robbie Williams will be looking for his charges to keep up the same level and that could spell trouble for Kilmallock.

The county side have yet to get any consistency going in their season and a visit to Crossagalla is probably the last thing they need.

In the Premier League, leaders Fairview Rgs take on fourth placed Geraldines. Fairview had an impressive 2-0 win over Aisling last weekend and were full value for their win. The form of Ross Mann and James Fitzgerald gives the Blues a serious threat up front.

Geraldines were also in the winning circle on Sunday when they defeated Murroe 3-2 to advance in the Munster Junior Cup. It eased some of the disappointment of the previous week’s late defeat to Ballynanty Rvs.

Second placed Ballynanty Rvs travel across town to take on Champions Janesboro. Defeat to [Pike Rvs in the FAI last Sunday, has seen Balla exit the "Big Two" subject to objection so their focus for the season may have to be on local action.

As such the League will be the priority and they will be favoured to beat a Janesboro side short on confidence.

Nenagh are another side in need of points and they welcome an Aisling side smarting from an FAI exit against Fairview Rgs last weekend. They should expect a positive reaction from the visitors.

Opponents Mungret drew with Pike Rvs in their last outing and another win would nearly be enough to let them relax for the remainder of the season.

With leaders Moyross and second placed Charleville not in action it gives the chasing pack a chance to close the gap. Fairview, Murroe and Newport have two games in hand on Charleville and would overtake the Cork side in second place if they take full points from these back games.

Division 1B leaders take on neighbours Mungret with a three way tie for second place ensuring the pressure will be kept on.

In the FAI Youth Cup Fairview travel to Ballymackey in Tipperary on Saturday for a rematch of a game abandoned a few weeks back after unsavoury comments from the sideline with Fairview Rgs leading 1-0. It is hoped the Limerick side can make sure second time around.

There are three FAI Under 17 Cup games fixed for the weekend. Aisling, following a 5-2 win over Fairview on Sunday, host Galway side Craigmore in Annacotty on Sunday at 2pm. At the time of writing we still don’t know which day Cappamore take on Quigley’s Point or Carandonnagh or Shelbourne’s visit to Sligo side Merville.