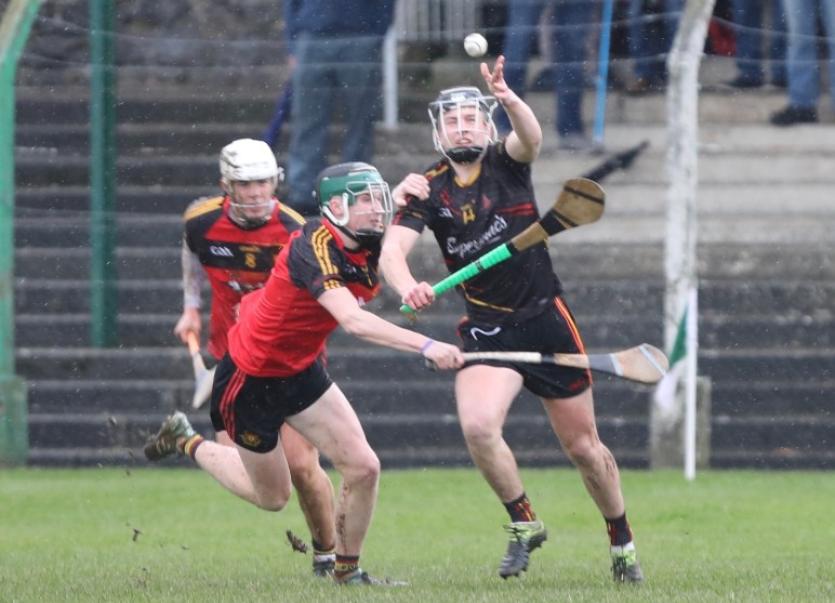 Aidan O'Connor of Ardscoil Ris attempts to win this possession ahead of the CBC defenders. pic: Dermot Lynch

LIMERICK kingpins Ardscoil Ris ended level, 0-13 each, with Cork's CBC today but it wasn’t sufficient to progress the North Circular Road outfit into January's quarter finals of the Harty Cup.

The Limerick city side lost to Templemore and beat Rochestown in earlier rounds but needed a win here to reach the knockout stages of the Munster Post Primary Schools Senior (U19) A Hurling Championship.

Prior to the game Ardscoil Ris knew that a five point win would guarantee them progress and as it turned out a one point win would be have enough given the winning margin of Templemore over Rochestown.

Cork's CBC reach the quarter finals as group winners and Our Ladys of Templemore as runners-up from this group.

After 12 successive seasons in the knockout stages it's now back-to-back seasons without progressing beyond the group stages for Ardscoil Ris.

In this final round game, the sides were level on eight occasions in very slippery conditions in Kilmallock with Ardscoil Ris left to rue 10 wides – CBC of Cork had two wides.

It was 0-6 to 0-5 to Ardscoil Ris at half time but there was never a lead for either side greater than two points in this tight contest.

CBC made the early running and were 0-3 to 0-1 ahead after seven minutes. They were led by Jack Cahalane, who ended with nine points, including five pointed frees, a line ball and three points from play.

CBC battled back to level for the third and final time in the half at 0-4 each on 21-minutes.

With Aidan O'Connor joining O'Neill on the scoresheet, Ardscoil Ris brought a one point lead into the half time break - although they would later regret seven wides in the half.

Twenty minutes into the second half the game was level at 0-9 each and then the Cork side hit the front.

Ardscoil Ris and O'Neill hit back to regain the lead at 0-11 to 0-10 with six minutes to play - the last time they were ahead.

Twice down the home stretch, CBC hit the front with two points from Cahalane but an Aidan O'Connor point and ultimately an injury time Cathal O’Neill free sealed the draw.

* See the print edition of the Limerick Leader for full match details.