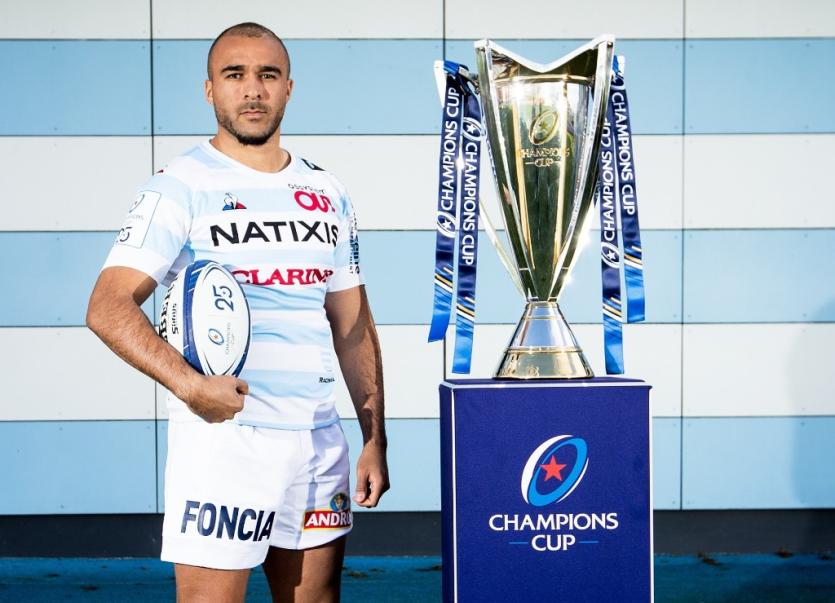 Simon Zebo returns to Thomond Park this Saturday, 5.30pm, when his Racing 92 side face Munster in the Heineken Champions Cup

FLYING winger Simon Zebo says it will be surreal coming back to Thomond Park to play against Munster next Saturday, but he is really looking forward to it.

Zebo made 144 appearances for Munster, scoring 60 tries, and will now return to Thomond Park hoping to oust his native province as the two sides try to build on their bonus point wins on the opening weekend.

French Top 14 giants Racing 92 lock horns with Munster in Round 2 of the Heineken Champions Cup at 5.30pm on Saturday. Both sides scored bonus point wins in their opening round fixtures.

Twenty nine-year-old Simon Zebo said: “It will be a special occasion. I suppose it was probably inevitable that we would clash at some stage, but it is still very fresh. It’s not that long since I left.

“It will be very, very exciting playing against my friends in front of the supporters who I grew up playing in front of. It will be great seeing a few friendly faces. Ah, it’ll be an exciting fixture."

Zebo has had more than rugby on his mind in recent days and he and his partner Elvira Fernandez, who have a four year old son Jacob and two year old daughter Sofia, prepared for the birth of their third child.

“I had quite a hectic week this week so I didn’t get much minutes under my belt. Hopefully put my hand up and go out there and enjoy myself in Thomond Park,” he added.

Zebo made 35 appearances, scoring nine tries, for Ireland but was cast aside by Joe Schmidt two years ago when it was announced in October 2017 that he was going to leave Munster for France at the end of the season.

Zebo said he knew the consequences of his move to France. His primary concern is performing for Racing. He slotted into their squad of global stars with ease last season, scoring 16 tries in 26 appearances in his first campaign to become a crowd favourite at their indoor stadium, the U Arena, in west of Paris.

With a squad of 24 full internationals from seven countries, and another clatter of U-20 World Cup winners coming through, Zebo knows getting game-time is the first priority but if the good performances continue and a call comes from Andy Farrell, he won’t be found wanting.

“You never know. I will just keep playing my best rugby. Last season was my first season over in Paris. I was playing pretty good rugby. So hopefully now that we have all of our internationals back from the World Cup we can get back into the swing of things and continue on the momentum we are on.

“If I play well then the rest takes care of itself. I have had no dealings with Andy Farrell as head coach because he is just in.

“I have a very good relationship with him so it’s not a case of whether it comes or not, I will not be disappointed, I am just going to keep enjoying my rugby. Andy is a great guy and a great coach and I wish him all the best.

Zebo got to know Farrell initially when he was called into the 2013 Lions squad and then when the English man was appointed as defence coach with Ireland.

“We built up a good relationship. If I get a call then I would love to be a part of it and if not I wish him all the best. And I have no doubt he will improve on what was a disappointing World Cup,” added Zebo.