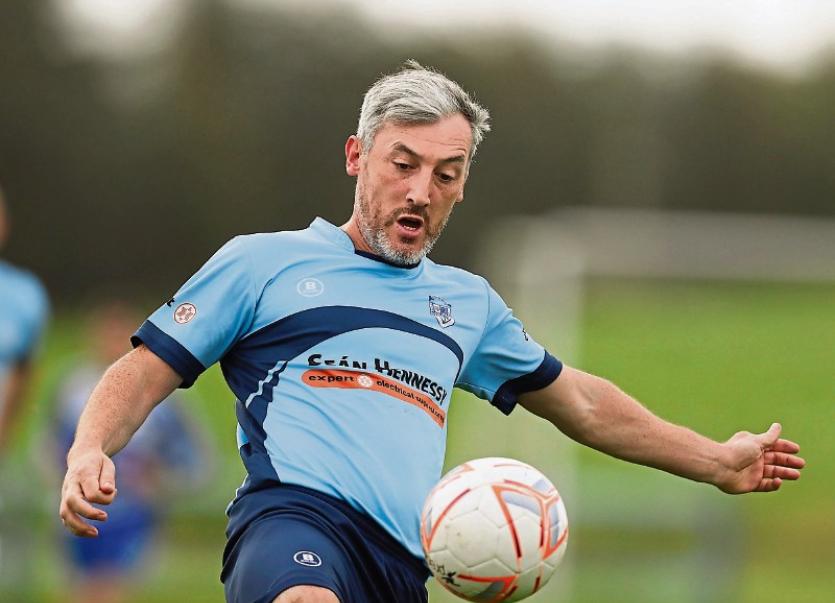 The big game in the Limerick Desmond League this weekend is the meeting of Rathkeale and Dunmanway Town in the Munster League Champions Trophy quarter-final in Rathkeale at 2 pm on Sunday.

Dunmanway won the West Cork League in dramatic fashion last season, beating Ballydehob in a play-off penalty shoot-out after the teams had finished level on points.

It’s hard to say yet if they will retain their title. They are in second last place with four points from three games but they have at least three games in hand on all the teams above them.

The reason for their reduced League activity is that they were involved in a number of Cup competitions, though they have now been knocked out of both the FAI Junior Cup and Munster Junior Cup. One of the players Rathkeale will have to look out for is centre-forward Mark Buckley, an u-20 Cork county footballer.

Rathkeale expect to be at full-strength. Manager Alan Doyle will have high hopes that striker Pa Ahern can add to his seven goals in five games for the side, especially if he reproduces the sharpness that he showed for the Limerick Desmond League against Limerick District last week. Midfielder Gary Enright and centre-half Sean O’Shea also excelled in that game and the trio constitute a formidable spine that can help to propel Rathkeale to victory on Sunday.

All domestic games last weekend, as well as Broadford United’s matches in the FAI Youths Cup and Munster Junior Cup, were called off as a mark of respect to John Neenan, who died suddenly last Thursday morning.

John was a founder member of Broadford United in 1970. He was the club’s first Treasurer and also had spells as Chairman and Secretary. He was a committed and hugely influential member of the Limerick Desmond League management for many years, serving as Registrar and Secretary. He was also the League’s representative on the Munster Junior Council for a period in the early 1980s.

John remained an ardent supporter of both Broadford and the League right up until the end. He watched proudly from his jeep last week as Limerick Desmond beat Limerick District 4-0 in the Oscar Traynor Trophy. As a former Oscar Traynor manager himself, he was well aware of the merit of this victory and his pride was no doubt intensified by the fact that the current team is managed by his son, Jim.

The Weekly Award this week goes to the Limerick Desmond league team who beat Limerick District 4-0 in the Oscar Traynor Trophy last week. They will go into a draw with the other Weekly winners at the end of the season for vouchers to the value of €150, €100 and €50, sponsored by Chris McGill of adrenalinsports.ie, Newcastle West.

Limerick Desmond League sides had a good day in the fourth round of the FAI Junior Cup on Sunday, winning three out of four. Pride of place must got to Carrig Celtic, who came from 1-0 down at half-time to win 3-2 at home to Killarney Athletic.

The game was turned on its head when Carrig notched up three goals in quick succession midway through the second-half, scored by Noel Callanan, Donie Nolan and Seanie King. Carrig were forced to endure an anxious finish when Killarney pulled a goal back in the 85th minute but they held on for a significant victory.

The other two winning teams, Rathkeale and Newcastle West Town, also came 1-0 down. For Rathkeale, Pa Ahern equalised against Clare visitors, Shannon Olympic, in the first-half. Ahern also got on the scoresheet in the second-half, as did Jack Hennessy, Mikey Morrissey, Sean O’Shea and Cian Shorten (penalty) to give Rathkeale a 6-2 victory.

Newcastle West Town were 2-1 ahead at half-time at home to Shannon Olympic, thanks to Seoirse Joyce’s equaliser and Charlie Power’s 43rd minute goal. Joyce completed the scoring at 3-1 in the 62nd minute.

There was honour in defeat for Granagh United, who went down 3-1 at home to Kerry kingpins, Killarney Celtic. The Granagh goal was scored by Daniel Shelton.

Ballingarry recorded an impressive 3-2 extra-time victory at home to Avenue United in the second round of the FAI Youths Cup.

The win secures a third round tie (last 32) at home to Douglas Hall from Cork.

There was no joy for the two other Limerick Desmond League teams. Newcastle West Town lost 5-0 at home to Ennis Town and Abbeyfeale United were beaten 7-0 by Bridge United in the Clare League grounds in Ennis.