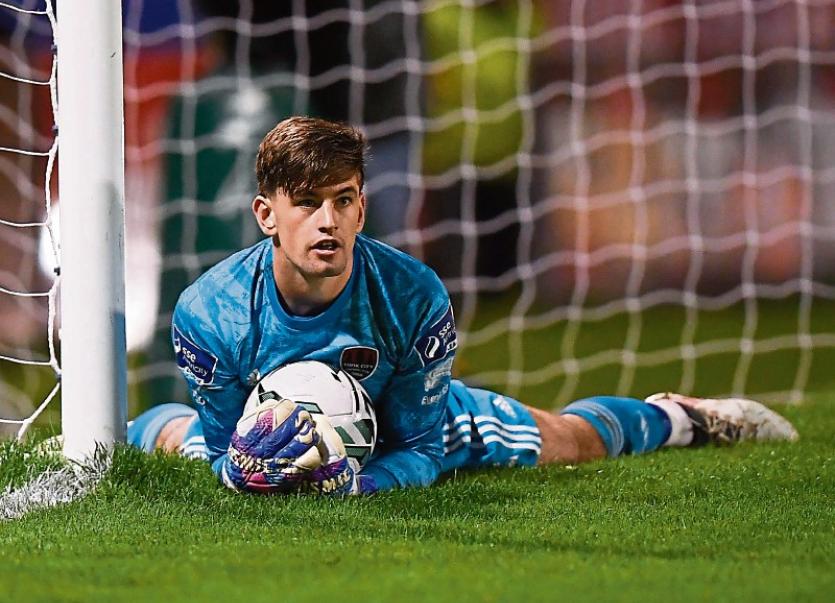 When Tadhg Ryan wore goalkeeper gloves to his first training session with Cappamore Celtic aged eight, he could only dream of one day becoming a professional.

His time with the east Limerick club assisted his rise as a top quality goalkeeper, but Ryan also cites the influence of his older brothers, Shane and Michael, in their front garden as a major part of his development.

Eventually, his skills would earn him a move to England and two seasons in the League of Ireland has seen him earmarked as a top-quality goalkeeper who is only getting better.

“I’ve two older brothers, so I was always a goalkeeper,” explains 22-year-old Ryan.

“As soon as I was old enough they stuck me between two sticks -they just wanted someone to kick a ball at – but it ended up paying off.

“They are 11 and 12 years older than me, so all they wanted was someone to throw the ball back to them. The front garden was where I got my love of goalkeeping.”

Playing with his local club until he was 14, a move to Fairview Rangers followed. Tadhg played across a number of different age groups, as his talent was clearly being noticed.

It also forced him to make a decision to focus on soccer and push any ambitions of playing GAA to the side.

A fixture clash, which left the then 15 year-old in tears, saw him leave a hurling match at half time, to don the gloves for the Fairgreen outfit.

“Soccer was always my first love, but I played Gaelic and hurling also. I was flat out with both hurling and soccer, between training and matches.

“But that was my decision; I was sticking with the soccer. I knew if I really wanted to become a professional footballer, which was my dream since I was jumping around the garden, I had to give it my focus.”

A short stint with Limerick FC U19s helped Ryan onto the radar of Huddersfield Town. The keeper moved to the Championship club and was joined by two more Limerick men, Ronan Coughlan and Sam Warde.

Ryan would spend four and a half seasons in Yorkshire, playing with the U18s, U21s and U23s – while also training with the first team on a regular basis. He would also spent time on loan with non-league Radcliffe Borough.

“I was very lucky with the coaching I got. I had former Ireland International Nick Colgan as my goalkeeper coach so to learn from him was fantastic. The goalkeeper I am today has a lot to do with Nick. I looked at each goalkeeper at the club and said ‘What can I take from their game?’ I had a front row seat to see how the likes of Joe Murphy and Alex Smithies worked. Joe has played over 600 professional games now.”

Manager Shane Keegan installed him as the number one immediately, though mixed results saw the pre-season title favourites for the 2018 season finishing a disappointing sixth.

“There was contact with Galway six months earlier, and I was immediately interested as it was an opportunity to get games as a first team goalkeeper. Shane made contact with me but I picked up a small injury so I had to wait until January.

“It felt right to go into a big club like Galway United, even though they were relegated. I went with my gut and I’m glad I made that decision now. It’s game time that matters, and it is where players are judged on. I felt I had learned my trade (at Huddersfield), but it was now time to play.”

Going to England as a youngster only to return home has often left other Irish players broken and out of love with the game, but this experience hasn’t deterred Ryan.

“You look at the League of Ireland now, I know it hasn’t worked out for some fellas (in England), but there is more than one way to become a professional footballer. I love playing football every day, so it is never a bad experience.”

Coming in as understudy to the vastly experienced Mark McNulty with Cork City for 2019, meant patience was important for Ryan for his next move.

“I have that ambition to play as high as I can, so when Cork City made contact it was very hard to turn down. They’ve been so successful, I felt the move was right and I backed myself to do well if I got an opportunity.”

“Coming in, I knew where I stood; ‘Nults’ (Mark McNulty) is a legend, and probably the best goalkeeper in the league for the last number of years. I kept working hard, because you never know when an opportunity will arise.”

“Eddie Hickey was the goalkeeper coach, I had been in his goalkeeping academy when I was 12 or 13, so working with Eddie and Mark this year was fantastic. I was happy with my performances over the eight games, with the 1-0 victory over Dundalk probably the standout.”

A pair of clean sheets over his eight outings helped Cork City to eighth place in the Premier Division, and it appears the experience has left Ryan wanting more for 2020 – as he looks to become one of the top goalkeepers in this country, and potentially beyond.

One thing is for sure, Ryan has made the right decisions to this point and there is no doubting he will continue on his path with the same clarity of purpose shown to date.