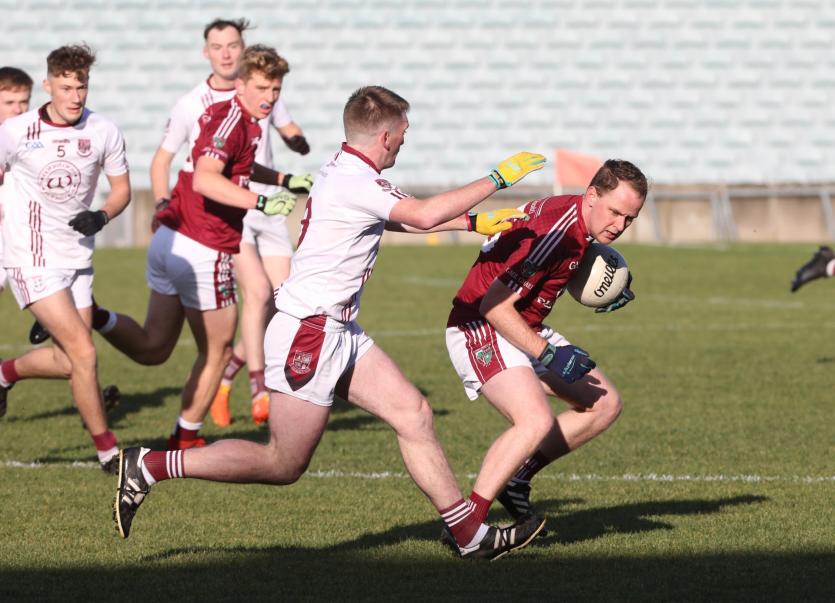 DEFEAT at the first hurdle for Galtee Gaels in the Munster club intermediate football championship this Saturday.

A run of seven successive scores in the opening 10-minutes of the second half propelled the Lisdoonvarna into a November 17 semi final with Tipperary’s Moycarkey-Borris or Clonmel Og.

Just two years ago Galtee Gaels narrowly missed out on a Munster junior football final – suffering an extra time defeat to Kerry’s Dromid Pearses but on this occasion they were second best.

It was an opening half when the men from Anglesboro and Kilbehenny had just one wide and the men from Lisdoonvarna had two wides.

The sides were level on two occasions and ultimately it was a 21st minute goal from an Aidan Davidson penalty that proved to be the difference between the teams.

The Limerick champions hit the ground running and were 0-3 to 0-1 ahead after six minutes with Padraig McGrath, Padraig Gallahue and Bob Childs on the mark.

St Breckans had three pointed frees from Davidson to level the game at 0-3 each on 12-minutes.

Then Joe McGann, who was fouled for all three pointed frees, kicked the Clare champions ahead for the first time in the 13th minute.

Bob Childs levelled again with one of his three first half scores from play. His point of the only score from the south Limerick men across a 20-minute spell.

Then all turned with the goal.

At one end of the field Galtee Gaels had the ball in the net when Alan Condon fisted in at the near post in a crowded goalmouth. While the umpire raised the green flag, the referee awarded a free out after consultation with both umpires.

Up the field went St Breckans and Dale Masterson was fouled for the penalty, which Davidson scored.

When McGann kicked his second point, St Breckans were 1-5 to 0-4 ahead and 24-minutes lapsed.

Galtee Gaels finished well though with two points for Bob Childs and one from Alan Coughlan.

That left two points between the teams at half time with advantage to the north Clare men.

Just like the first half Padraig McGrath opened the scoring in the second half - after just 25-seconds.

Sean Clancy almost went to close to goal but his shot was smothered.

Down the other end, St Breckans took their chances.

Their second goal came nine minutes into the new half from Joe McGann.

The Limerick U20 football strength and conditioning coach Conor Shannon was in the St Breckans team and he soon got on the scoresheet as the lead was edged out to 10-points entering the final quarter.

Finally a Bob Childs free ended 15-minutes without a Galtee score in the game's 46th minute.

Galtee Gaels needed a goal but it came too late - Alan Condon firing low through a crowded goalmouth six minutes from the end.

Bob Childs almost scored another goal in the six minutes of injury time but goalkeeper Tristan O'Callaghan went full length to save around his post.

With Breckans scoring once in the final quarter, Galtee continued to pour forward and scored four in a row.