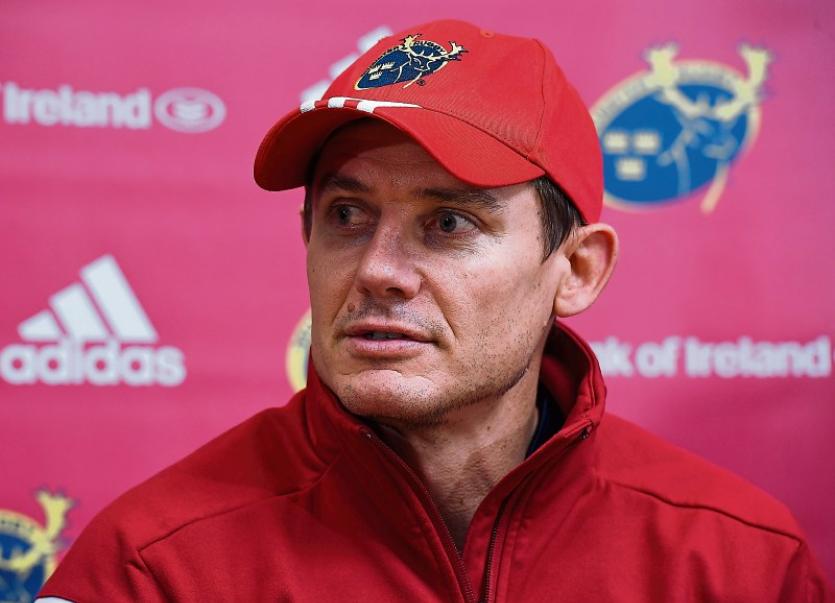 NEW senior coach Stephen Larkham has been impressed with the skill set level of the Munster players, adding that he feels the talent at the province is ‘probably better’ than what he has seen in Australia.

Munster’s season cranks up a gear from this weekend with the visit of Ulster to Thomond Park for a crucial Guinness PRO14 inter-provincial derby on Saturday, 5.15pm, followed by their opening Heineken Champions Cup fixtures against Ospreys at the Liberty Stadium on November 16, 5.30pm.

Asked who he felt would win a game between his former side, the Brumbies, and Munster, Larkham said: “Wow that’s a tough one isn’t it (laughs), I think it would be draw wouldn’t it?

“You know with the Brumbies season you have your internationals for the whole season and here we finally got our full squad back together this week for the first time but I’ve been really impressed with the players in this first five rounds.

“Somebody asked me that the other day and I think the talent, the skill level over here is probably better than it is in Australia . . . .

“Honestly I was very impressed with the skill levels of these players. Their skill levels are good and their ability to learn things is definitely better than some Australian players.”

Munster have been boosted this week by the return of their 12 Ireland World Cup players. A number of them are set to be involved in the matchday squad for Saturday’s visit of Ulster to Thomond Park.

Larkham insisted he had not seen any signs of a World Cup hangover from the Ireland players who returned this week.

“I haven’t seen it this week. And if I had seen it, those players would not be playing. We have players here who have been busting themselves and doing well. The guys coming in have earned that respect and deserve that.

“But if they showed any sense of that attitude, they would have been found out. But they haven’t. They want to play some rugby because it’s been a long time between drinks for a few of them.”

Both players are expected to join next summer on two-year deals.

Munster Head Coach Johann van Graan said: “We are in advanced discussions with both players, but there are no contracts signed at this stage.

“We are confident there will be a commitment in the future, subject to conditions, but at this stage no contracts have been signed and we have nothing official to confirm.”

Munster senior coach Larkham revealed that he did not have any estimate as of now as to when out-half Joey Carbery will return to action. Ireland international Carbery is currently sidelined with an ankle injury.

Larkham said: “Joey is around the boys a lot more now, so he is in doing rehab. We haven't got a long-term or a short-term estimate of when he is back yet.

“The other boys are doing a fantastic job. I think JJ (Hanrahan) had a fantastic game (v Cardiff) and Tyler (Bleyendaal) has been playing really well as well, so we have some good coverage there at the moment which is fortunate for us.”

Munster will aim to make it 25 games unbeaten at home in all competitions on Saturday.