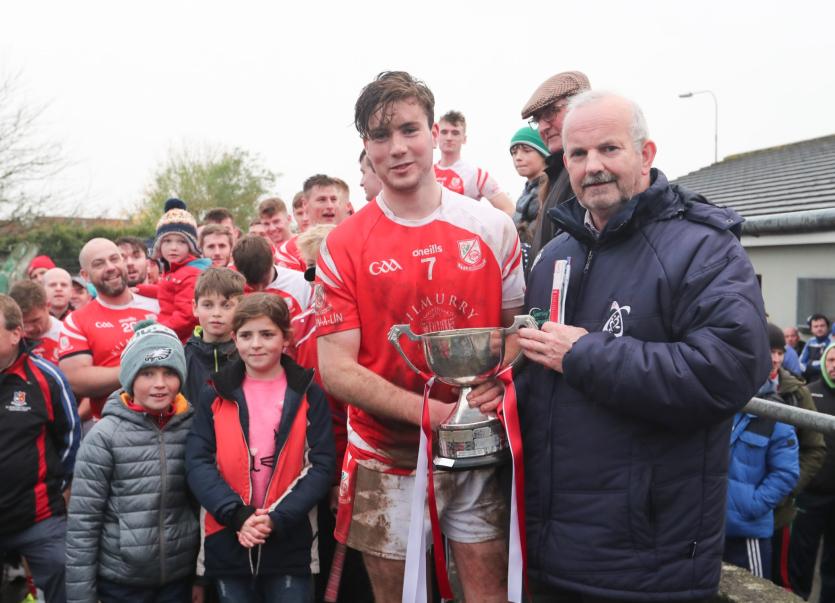 Monaleen captain Daniel Hesson receives the County Junior A football Cup from Gerry Philips, Chairman of the Football Board, in Kilmallock on Saturday

MONALEEN secured Junior A football honours for the first time since 1969 with a deserved 2-6 to 0-6 victory over Croom at a wet Kilmallock on Saturday afternoon.

A late switch of venue from Bruff to Kilmallock didn’t affect the city club, who will now boast a senior and intermediate team for 2020 – the only club to have a side in the top two grades of Limerick football.

Their victory was made possible thanks to second-half goals from Mark O’Dwyer and Niall Loughran, as Croom wasted their goal chances during an extremely wet hour.

The conditions made it a difficult encounter at times, but Monaleen were able to control the game once they got their nose in front midway through the opening half.

Full-forward O’Dwyer, who top scored for the clubs senior hurling team this season, top scored with 1-3, including a well-taken penalty seven minutes into the second half.

Monaleen led 0-5 to 0-2 at the interval, despite Croom enjoying the majority of possession. Dan Lucey put the men in blue ahead with a free inside 60 seconds, but it took 25 minutes for his teammates to raise another white flag.

In the interim, O’Dwyer and the experienced Brian Carson both landed a brace of points, one from play and one free apiece, to move them three points clear.

Carson’s 22nd minute effort was arguably the point of the day, as he hooked the ball over his head, left-footed, from 25 meters despite the attentions of three opposition defenders.

Mark O’Riordan replied off his left-foot, but Andrew La Touche Cosgrave had the last say of the opening half, to re-establish the three-point lead. Monaleen has lost both goalkeeper Dermot Dineen and defender Jamie Porter to injury in the opening 15 minutes

A Lucey reduced the gap before Shane Burke caught O’Dwyer with a raised arm, which saw a penalty awarded. O’Dwyer sent Burke the wrong way to open up a large looking five point margin.

Croom, who fell at the final stage in 2016 to Galtee Gaels, put up a fight. Points from substitute Dara O’Faarrell, Jamie Greeves and John Quirke reduced the gap to just two points, but Monaleen kicked the final two scores to seal their promotion. O’Dwyer landed a pressure free, before Niall Loughran produced a neat finish following a swift counter attack for his sides second green flag, on 57 minutes.

Croom have the consolation of a Munster Championship tie with the Waterford Champions on November 16, while Monaleen end the year as City League, County League and Championship winners of Limericks third tier.