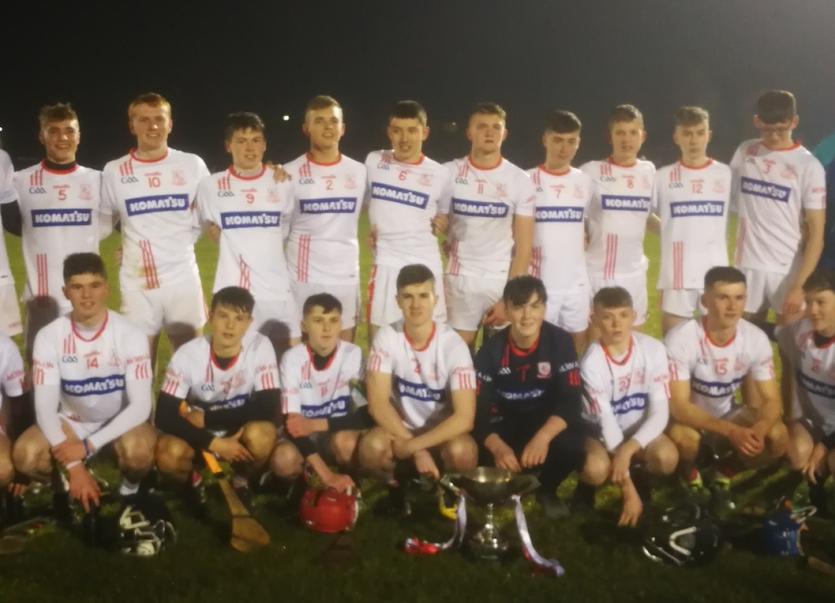 A first-half Joe Fitzgerald goal proved to be the difference as Monaleen were crowned County Minor ‘B’ hurling champions in foggy conditions at Mick Neville Park on Friday night. Monaleen 1-14 Granagh-Ballingarry 1-10

Granagh-Ballingarry had outscored their Castletroy opponents by 1-4 to four points in the second-half but Monaleen’s first-half onslaught was enough to secure the city side’s well-deserved 1-14 to 1-10 win in this entertaining County Minor ‘B’ Hurling Championship final.

Both sides exchanged points in the early stages before Granagh-Ballingarry began to take a stronghold on the game and a superb Luke Flynn point followed by two Gearoid Lynch frees gave the South West Limerick side a three point advantage midway through the opening half, 0-6 to 0-3.

Five points for Monaleen without response then turned the game on its head before the impressive Joe Fitzgerald found the back of the net to put five points between the sides.

The city team exploded into action as Fitzgerald turned his marker to break through the challenges with pace before batting the ball down past the outcoming Keith O’Kelly.

A brace of Donnacha O’Dalaigh points, a score from play and a well-taken free with the last puck of the game, ensured that Monaleen entered the earned break with a comfortable seven point lead, 1-10 to 0-6 in favour of the boys in red.

Credit to Granagh-Ballingarry, they fought back in the second-half and never gave up any hope of securing the prize on offer.

The Granagh-Ballingarry corner forward found himself one-on-one with Monaleen goalkeeper Shane Twomey after team captain Luke Flynn selflessly squared the ball to Murphy who whipped to the net.

The excellent team goal got underway when the talented Gearoid Lynch played a superb ball into Flynn before Murphy brought his side right back into the game, seven minutes into the second-half.

Both sides exchanged points again with a free from either team before a Donnacha O’Dalaigh effort and a Josh Mulcaire-Quille point left the score at 1-12 to 1-9 fast approaching the latter stages.

Ten minutes from time, O’Dalaigh restored Monaleen's four-point lead but minutes later Owen Lynch gave his side a fighting chance as Granagh-Ballingarry went in search of the all-important equalising goal.

Lynch’s effort proved too little too late despite a second-half resurgence from a battling Granagh-Ballingarry side and as Joe Fitzgerald slotted over in the dying moments, Monaleen knew they had done enough to be named this year’s County Minor ‘B’ hurling champions.