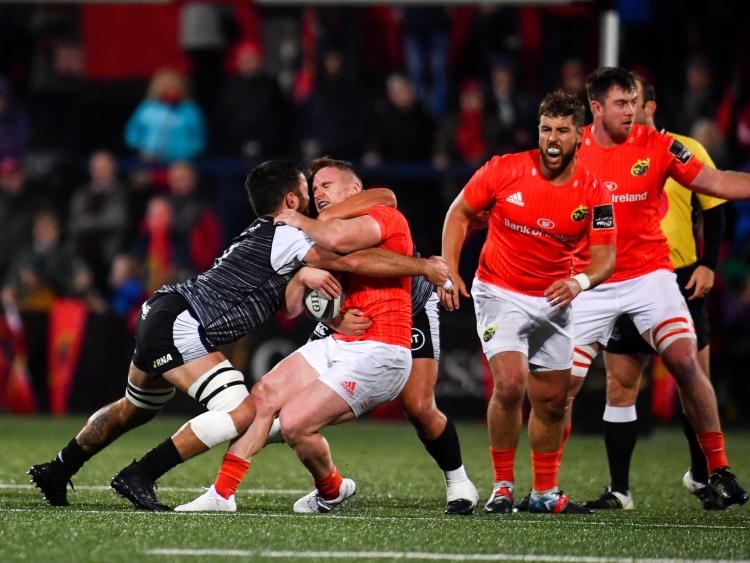 MUNSTER got back to winning ways in the Guinness PRO14 after scoring a hard fought 28-12 bonus point victory over the Ospreys before at official attendance of 7,311 at Musgrave Park on Friday night.

Three second half tries, including an 80th minute effort from substitute Arno Botha helped Munster secure their eighth successive victory over the Ospreys.

Munster led Ospreys 7-6 at the end of an opening 40 minutes that was high in perspiration but lacking any great inspiration.

The persistent drizzle which fell during much of the opening half made for difficult handling errors and added significantly to the error count.

Munster took the lead on 15 minutes when centre Dan Goggin made a terrific break up the right touchline before passing inside for prop James Cronin to score.

Out-half Tyler Bleyendaal duly added the conversion for a 7-0 lead.

Goggin breaks, Cronin crawls and @Munsterrugby are up and running in Cork

Ospreys out-half Luke Price kicked two first half penalties to leave the minimum between the sides at the break.

However, three second half tries for Munster, from hooker Rhys Marshall, Man of the Match Mike Haley and finally back-rower Botha late on secured a maximum five-point haul for the home side.

Arno Botha with his 3rd try of the season & its the bonus point for Munster tonight!#MUNvOSP@BHHooker @MRSC16 @Rugbai_BEO pic.twitter.com/pY8NN9q5Mu

Munster are unbeaten in their last 24 home games in all competitions since Leinster beat them at Thomond Park in the Championship in December 2017.