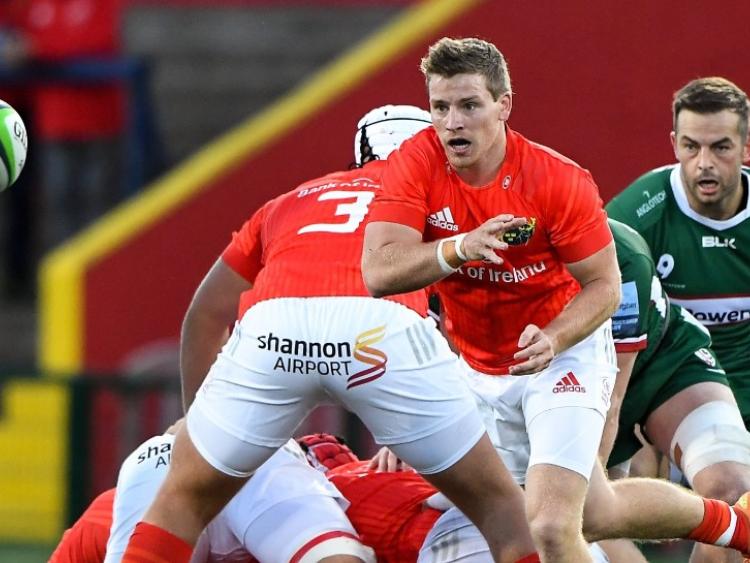 The Munster team to face Ospreys at Irish Independent Park on Friday night at 7.35pm has been named by Head Coach Johann van Graan. There are five changes to the side beaten by Cheetahs last time out as Calvin Nash, Neil Cronin, James Cronin, Jed Holloway and Jack O’Sullivan all start.

Academy no.8 O’Sullivan makes his Guinness PRO14 debut in the back row as Holloway is named in the Munster starting XV for the first time.

Neil Cronin, James Cronin and Nash all make their first starts of the season.

Mike Haley is named at full-back with Nash and Shane Daly on either flank.

The centre partnership of Rory Scannell and Dan Goggin is unchanged with Neil Cronin and Tyler Bleyendaal in the half-backs.

Rhys Marshall, James Cronin and Stephen Archer pack down in the front row with Holloway and captain Billy Holland in the engine room.

Craig Casey and Sammy Arnold are set to make their first appearances of the season off the bench.

The Ospreys team to play Munster at the Irish Independent Park, Cork on Friday 25th October, K.O 7:35pm has been named:

Friday night’s clash between Munster and Ospreys will see the sides meet for the first time this season with the teams set to face each other in the Champions Cup next month and January.

Munster are unbeaten in their last 23 home games in all competitions, a record that stretches back to December 2017. The province have won their last 11 fixtures at Irish Independent Park but Ospreys have lost only twice in their last eight Guinness PRO14 fixtures.

After a difficult start to the season that saw Ospreys lose away to Leinster and Ulster, the Welsh side bounced back with a home win over Benetton last time out.

Munster, meanwhile, made a terrific start with victories over Dragons and Southern Kings before falling to a loss away in Bloemfontein to Cheetahs two weeks ago.

If Ospreys are looking for inspiration for this one then look no further than their visit to Cork in February 2016, when they overcame Munster 21-17 in a memorable performance. Since then the Munstermen have taken revenge, winning their last seven against the Welsh region, but what better time for Ospreys to buck that trend than during the World Cup season? They possess miracle man Sam Parry in their ranks of course, the hooker now the only forward to score two hat-tricks in Championship history, Scott Williams grabbing their other try against Benetton. Munster conceded six tries in Bloemfontein but with first-rate players like Mike Haley, Rory Scannell and Tyler Bleyendaal in their ranks – expect a response.