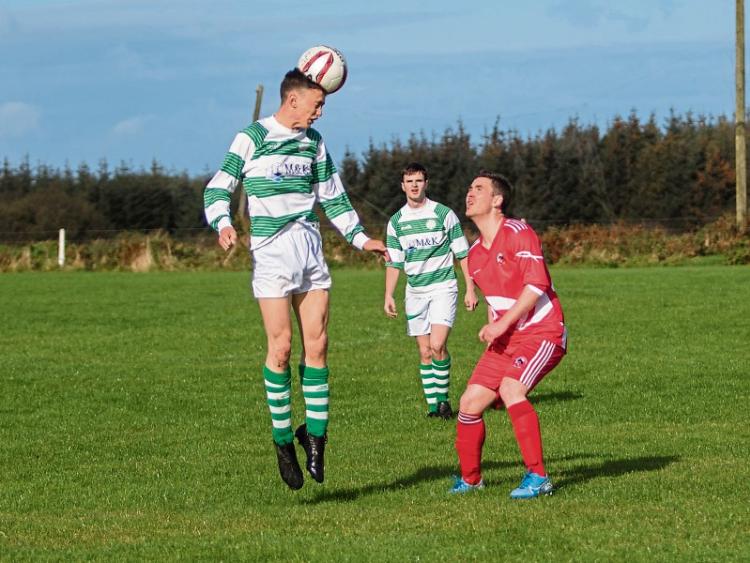 John Byrnes, Carrig Celtic, heads the ball clear under pressure from Blaine Collins, Kilcornan, during their sides clash in the New Balance FAI Junior Cup 3rd Round in Carrigkerry

After a gap of a few seasons, the Limerick Desmond League return to Oscar Traynor action on Sunday when they kick-off the group stages by playing the Kerry League in Tralee at 2 pm.

Jim Neenan was appointed as manager in mid-August and he immediately got down to business by naming Gary Egan and Tom Kelly as his assistants and choosing a panel of the best players in the League.

Andrew Ruddle, Seamus Brosnan, Chris Smith, Gary Culhane, Mikey Hickey and Jack Hennessy are out injured at the moment so that leaves a 17-man squad for Sunday:

Whether or not they will get off to a winning start against Kerry remains to be seen.

Limerick Desmond have two other games in the group, at home to Limerick District on Tuesday November 5, and away to the Clare League on a date yet to be decided.

The top two will qualify for the quarter-finals, with the group winners having home advantage.

In his last game for Carrig Celtic before he leaves for Australia, Sean McSweeney left the club something to remember him by when he scored an injury-time equaliser at home to Kilcornan in the 3rd round of the FAI Junior Cup and then scored the winner with the last kick of extra-time with a magnificent 29-yard free-kick.

The two goals capped an all-round superb performance by McSweeney who turned the game in Carrig’s favour when he was moved to midfield for the second-half, having spent the first-half as striker.

Having earned extra-time by the skin of their teeth and the clinical nature of McSweeney’s finishing, Carrig looked the more likely team to win it. In the first period, substitute Eoin McEnery shaved the crossbar from a cross by Padge McCarthy, who later fired over from a pullback by King. In the second period, Anthony Mullins drilled wide from a square pass by Molyneaux, King fired over with a snap shot and Hayes’s shot from McSweeney’s corner was cleared off the line by the hard-working Guerin.

Kilcornan right-back, Kevin O’Keeffe, who played well throughout the game, was sent off for a second yellow in the last minute, after the award of a free-kick to Carrig. O’Keeffe’s dismissal wasn’t going to have any influence on this game as the free-kick was going to be the last action of the match before the expected penalty shoot-out. However, as anyone who follows the Brexit saga in the United Kingdom knows, things don’t always turn out as expected and McSweeney completed Carrig’s great comeback in the most dramatic manner possible.

Penalty shoot-outs were the order of the day in the FAI Junior Cup, with three of the five ties requiring this dramatic method of deciding the winner.

The first of them took place on Saturday evening when Granagh United won 4-2 on penalties after a 2-2 draw away to Adare United. .

Rathkeale created plenty of chances away to Clare Division 2 side, Manus Celtic, but were unable to convert any of them. A shock was prevented when Rathkeale won 5-3 on penalties.

Broadford United were on the opposite end of an identical result in Clare, beaten by Avenue United. It was a creditable performance by Broadford, who were injury-hit and under-strength on the day.

There was no danger of a penalty shoot-out being required in Creeves Celtic’s tie away to Shannon Town, who won 3-0.

It looked like St. Ita’s were about to cause an upset when they led 2-0 away to Glin Rovers after 15 minutes with goals from TJ Kelly and Eamonn Carmody. Darren Sheehan pulled a goal back on the half-hour and Ed Horan equalised on the hour. Glin completed their comeback when they won 6-5 on penalties.

Abbeyfeale United advanced to the third round with a 2-1 victory at home to Newcastle West Town.

Division 1 leaders, Breska Rovers, maintained their 100 percent record with a 4-3 victory at home to Shountrade.

Newcastle West Town Reserves moved into second place with a 4-0 victory away to Kildimo United.

Pallaskenry are joint third with St. Ita’s following their 3-2 victory at home to Shannonside FC.

Glantine remain a point in front in Division 2 after their 3-1 win at home to Askeaton B. Alan Doody bagged a brace, one from the penalty spot, and the other goal was scored by Chris Scannell.

Second-placed Askeaton A kept up their pursuit by winning 3-2 at home to Glin Rovers B.

Abbeyfeale United B moved up to joint third with a 6-1 victory away to Athea United.

Goals from Tom Clancy and Leonard Coughlan (2) had Breska Rovers B 3-0 up away to Mountcollins before the home team pulled back two goals before half-time through an own goal and Donagh Walsh. In the second-half, Coughlan completed his hat-trick to put Breska 4-2 up until James Brouder pulled a goal back from the penalty spot.

St. Ita’s announced themselves as genuine title contenders when they won 2-0 in the derby game at home to last season’s treble winners, Broadford United.

Abbeyfeale United moved into second place by winning 2-0 away to Ballingarry.

Askeaton made it two wins out of two with a 3-1 victory at home to Pallaskenry. Cormac O’Keeffe (2) and Eddie Murphy O’Connor were their scorers.

Mountcollins put points on the board at the fourth attempt when winning 4-1 at home to Athea United.