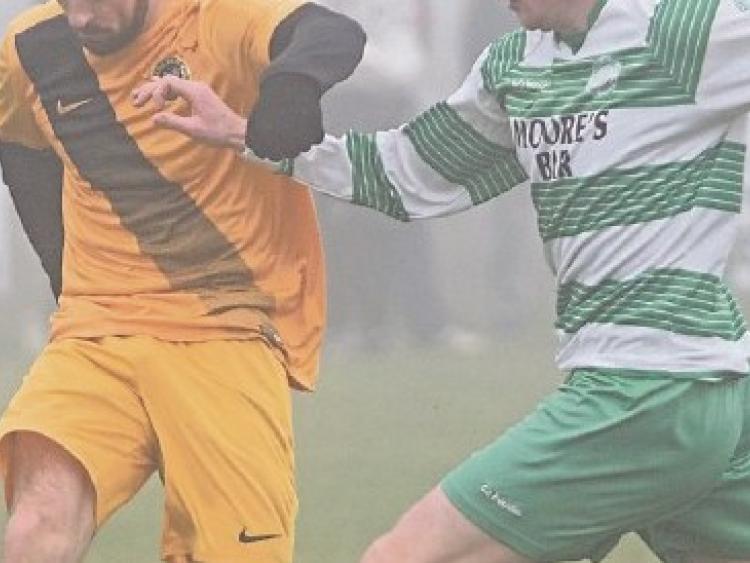 Ballingarry are now joint leaders of the Premier Division with Glin Rovers after winning 2-1 in a typically keenly-contested derby game away to Granagh United.

Dean Clancy opened the scoring for the visitors in the 3rd minute, Denis O’Connor equalised five minutes later with a superb volley and substitute Kevin Forde secured all three points for Ballingarry with a well-taken goal in full flight in the 80th minute.

NEWCASTLE WEST THROUGH TO FOURTH ROUND OF FAI JUNIOR CUP

Newcastle West Town pulled off a notable result last Saturday evening when they won on penalties after a 2-2 draw away to Kerry Premier A side, Castleisland, in the third round of the FAI Junior Cup.

Newcastle West had the better of the chances in the second-half, hitting the bar and shaving the post. There were no further goals in extra-time either and so it went to a penalty shoot-out, which Newcastle West won 4-1.

In the remaining second round tie, Creeves Celtic won 2-0 at home to Pallaskenry with goals from Seamus Mangan and Richard Hayes.

Abbeyfeale United received a walkover from Shountrade in the Munster Junior Cup, setting up a second round tie at home to Newcastle West Town on Sunday morning.

Kilcornan showed again that they will be a force to be reckoned with in the Premier Division this season when they came from 3-1 down to earn a 3-3 draw at home to Broadford United.

After draws in their opening two matches, Rathkeale recorded their first league win of the season in the form of a comprehensive 5-1 victory away to Adare United.

Breska Rovers maintained their 100 percent record in Division 1 and joined St. Ita’s in top spot when David Lowe’s 15th minute goal was enough to win away to Kildimo United.

St. Ita’s lost for the first time in the league when they went down 3-0 away to Knockaderry, whose goals were scored by Kieran Guinea (2) and Rob Egan.

Newcastle West Town Reserves are in third place after winning 2-1 at home to Shannonside FC.

Glantine maintain their one-point lead in Division 2 thanks to their 2-0 win at home to Carrig Celtic B on Saturday evening.

Askeaton stay in second place by virtue of their 4-2 victory away to Breska Rovers B.

Broadford United Reserves moved into joint third after winning 5-2 at home to Abbeyfeale United B.

Broadford share third spot with Askeaton B, who were held to a 2-2 draw at home to Mountcollins, who opened the scoring in the second minute.

Athea United recorded their first win at the fourth attempt with a 3-1 victory away to Glin Rovers B.

Newcastle West Town and Abbeyfeale United both advanced against Clare opposition in the first round of the FAI Youths Cup. Newcastle West had a resounding 10-3 victory at home to Newmarket Celtic, thanks to a hat-trick from Evan McMahon, a brace each from Robert Szebeni and Eddie Ward, with the other goals supplied by Dylan O’Shea, Cillian Ryan and Jake Power.

Abbeyfeale’s victory away to Tulla United was much harder-earned, winning 5-4 on penalties after a 1-1 draw.

Granagh United joined St. Ita’s at the top of the Youths League after a 5-1 victory at home to the Ashford lads. Their goals were scored by Ryan Fitzgibbon (2), Frankie Barrington, Conor Clifford and Evan O’Donnell.

All the goals in Pallaskenry’s 4-0 win at home to Athea United came in the second-half, scored by Chris Guerin (2), Jack Purcell and Ciaran Barry from the penalty spot.

There’s plenty of Cup action on Sunday, with six ties in the third round of the FAI Junior Cup and two games in the Munster Junior Cup second round.

The FAI Junior Cup ties can be divided into two categories: two all-local, all-Premier games and four matches away to Clare sides.

Adare United recorded a notable victory in the second round when they won 2-0 at home to Tralee Dynamos. They will be hoping to bring that form into their game at home to Granagh United, rather than the 5-1 defeat they suffered at the hands of Rathkeale in the League last Sunday.

Granagh also experienced defeat last Sunday, losing 2-1 in the derby game at home to Ballingarry. This tie looks to be a toss-up and I will give the nod to Granagh.

Kilcornan will have grown in self-belief after following up their 1-0 win away to Abbeyfeale United by coming from 3-1 down to earn a 3-3 draw at home to Broadford United last Sunday.

Their momentum might just get them a positive result against Carrig Celtic, for whom John Hayes is the main threat.

Avenue are putting pressure on Clare top dogs, Newmarket Celtic, at the moment two points behind the Premier Divison leaders on level games. They will provide a tough test for Broadford United, who will need to show more concentration than they did when losing a 3-1 lead to Kilcornan last Sunday.

Shannon Town are mid-table in Clare’s Premier Division, winning half of their six games. This suggests they will be able to account for Creeves Celtic, who are without a point after two matches in Division 1.

This game offers the best chance of a Limerick Desmond League side winning in Clare as Manus are a Division 2 side.

Abbeyfeale United won 4-1 away to Newcastle West Town on the opening day of the season but haven’t won since, while Newcastle West have pushed on if their penalty shoot-out victory away to Castleisland last Sunday is anything to go by. This game offers Abbeyfeale the opportunity to reassert themselves and I think they will take it.

Glin Rovers are joint leaders of the Premier Division and won 2-1 at home to Kilcornan in the previous round of this competition. That’s good enough form to indicate that they will be able to account for the serious challenge posed by St. Ita’s, who are joint leaders in Division 1.