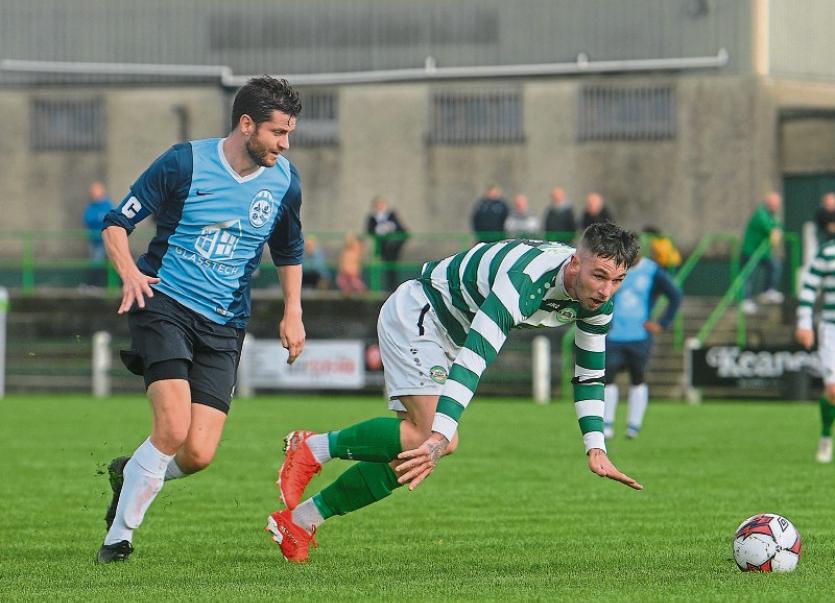 The FAI Junior Cup continues apace with the remainder of the Round Three ties scheduled for the weekend.

We kick off on Saturday evening with the tie of the round when Aisling Annacotty host fellow Premier side Geraldines.

Much has been made of the marquee signings at Aisling, but closer scrutiny will show that the Annacotty squad is a very young gathering.

They have a large number of current youth players or players just out of the youth set up and as such are still only learning the game.

The addition of the Clarke brothers will prove invaluable in their progression but this season's FAI may come too soon. That said, Aisling went within a whisker of making the decider last season but the less said, about the sorry mess of the FAI Junior Cup last year, the better.

On Saturday evening they meet an experienced Geraldines side on a good run of form. Striker Kevin Barry, always a thorn in the side of any defence he comes up against, has struck a rich vein and last weekend's hat trick versus Kilfrush will add to his confidence.

Thomas Clarke will be well aware of the threat posed by his former team mate but knowing does not equate to doing so we must wait to see who wins that battle.

Likewise at the other end of the park, Shane Clarke's battle with Thomas O'Grady is always worth the admission.

There are several key battle areas all around the park promising a rip roaring cup tie in front of what promises to be a big crowd.

On Sunday the only other all-Premier tie pits Janesboro against Coonagh Utd in Pearse Stadium.

‘Boro’ stumbled to victory against Hill Celtic last weekend but they will be glad of the win regardless. They are another side with a big smattering of youngsters who are going to take time to settle.

They meet a Coonagh team in dire need of a win to restore some confidence.

The Premier newcomers have had a difficult few weeks and a victory over the Premier League Champs would prove a huge boost.

A win for either side would leave them one game away from the Open stages of the competition which could kick start their season.

Fairview Rgs, legends in this competition, travel to Lee Estate to take on Star Rovers. Star are progressing back up through the Divisions and have a good Division 1A side. However, they meet a superb Fairview Rangers XI stuffed with household names and go into the tie more in hope than expectation.

Hyde Rgs put up a fine performance last weekend when bowing out of the MFA to Regional Utd. This weekend they face another team from the Premier A league in Cappamore.

The Hyde Road club have already beaten Holycross twice in Cup fare so will not be overawed by a team from a higher Division this weekend.

Cappamore posted a 5-2 win over Cals last weekend and will be favourites for the tie but it could either way.

Prospect Priory bounced back with a good 4-1 win over Patrickswell last Sunday and will be fancied to see off Northside in Cals Park.

Having seen off Hyde last weekend, Regional face another Div 1A side in Southend Utd on Sunday. The Southill side have been in fine form and will enjoy testing their progress against one of the big guns but Regional Utd should prevail.

Pike Rovers have been quietly going about their business and are expected to win at home to Knockainey while Newport v Moyross Utd should prove a much tighter affair that is too tight to call.

The final game in the National Competition sees Athlunkard Villa at home to Kilfrush. Both sides suffered disappointing defeats last weekend so both will be looking for a quick recovery.

The Munster Youth Cup kicks off with four Limerick hopefuls kicking off their campaign. A very good Murroe side welcome Division One's Kilfrush while Corbally Utd host Caherdavin in Athlunkard.

There are two games fixed in the Premier A League. Aisling host Hill Celtic and Murroe welcome Holycross.

In Div 1A League leaders Castle Rvs have the chance to extend their lead even further when they visit a rapidly improving Summerville Rvs side.

The Tuohy Cup continues tonight (Thursday) with a mouth-watering game between Pike Rvs and Regional Utd.

Both sides go into the tie in good form so something must give.

The game has a 7.00pm kick off in Jackman Park.