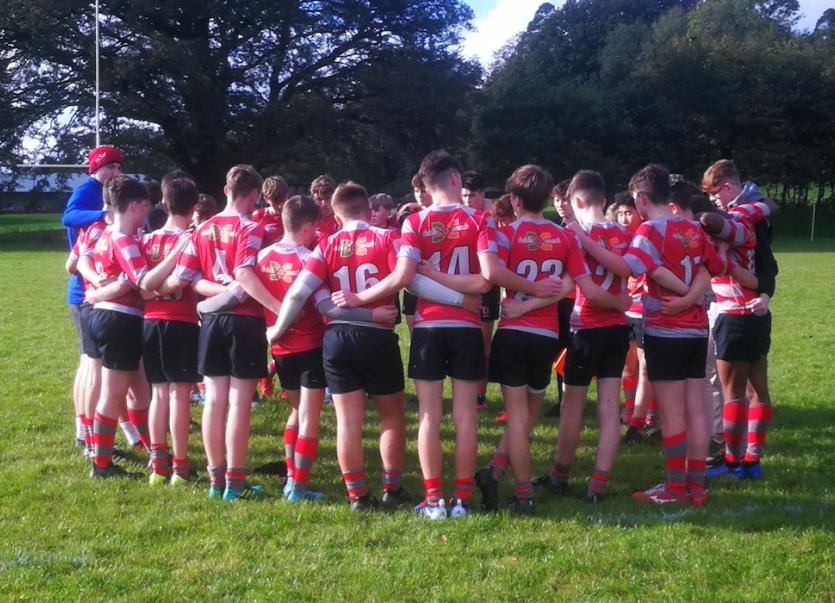 The Glenstal side ahead of their game with Bandon Grammar

Glenstal, who were without team captain Kieran Roche, were missing several players through injury following their opening group game against Rockwell and were up against it from the start against a notably more physical Bandon line-up.

Two speedy sides produced several facets of attractive rugby as the rain held off in East Limerick but it was the impressive Cork side that powered through a depleted Glenstal force, scoring ten tries along the way.

The hosts suffered a heavy 36-0 defeat to Rockwell in the first round of the new-look Clayton Hotels Munster Schools Junior Cup which sees the Murroe-based school play their games in Group B of the prestigious competition.

Glenstal are the only Limerick school in Group B of this season's Junior Cup which includes three Cork sides, Presentation Brothers Cork, Bandon and Christian Brothers, along with Tipperary school, Rockwell College.

The Cork side were well in charge during the opening 20 minutes having jumped in front after just eight minutes with the first of Paddy Gaffney’s pair of tries.

Glenstal had been under pressure from the very start and Bandon were awarded a penalty for offside with just three minutes on the clock – the effort was kicked wide by Hicks but the visiting South-West Cork school were soon off the mark.

Bandon added a second try, 15 minutes in, when Sean Coughlan finished well off the back of a maul before Hicks kicked over to make it 14-0 to the visitors.

Two minutes later, the in-form Gaffney took full advantage of a Glenstal highline to score under the posts for his second try of the afternoon.

Nick Miller’s charges conceded, a fourth, fifth and sixth try before half-time as Peter Symington, Mitchell Connolly and Coughlan finished for Bandon for a 38-0 half-time lead.

Glenstal defended well in the early stages of the second-half and temporarily took a grip on proceedings but Bandon's superior physicality shown through as the game went on and the hosts tired.

Not long after the restart though, the momentum of the game swung back in Bandon’s favour again and Conor Miskella added his side’s eighth try of the game.

Dylan Hicks converted from close-range to give the Bandon a comfortable 45-point advantage.

Midway through second half Bandon made it a 50-point game before substitute Donald Thomson scored in the corner for the Cork side’s ninth try with less than 10 minutes to go.

Moments later, as Glenstal looked to play the ball out through their backs, they were punished for a knock-on as Peter Symington finished following a turnover in play to score his second try and Bandon's tenth.

The in-form Hicks converted to secure a 62-0 win for Bandon Grammar School.