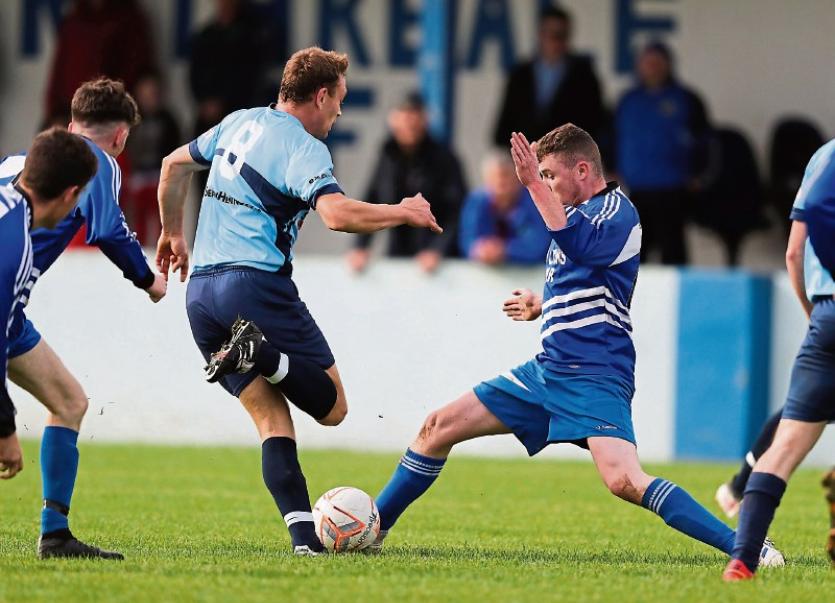 The last five Premier Division titles have been shared between Abbeyfeale United and Rathkeale, with Abbeyfeale winning three of them, and so there was there was much interest in the early-season encounter between the two sides in Rathkeale last Sunday morning.

The game ended in a 1-1 draw, which was a fair result, as Abbeyfeale created the better chances but Rathkeale dominated possession for the last hour.

ANOTHER IMPRESSIVE CUP WIN FOR ADARE

Having beaten Tralee Dynamos 2-0 in the FAI Junior Cup a couple of weeks ago, Adare United continued their impressive Cup form into another competition when they won 2-1 away to Ballingarry in the first round of the Munster Junior Cup last Sunday. A goal from Josh O’Connor had the home team ahead at half-time but Adare won it with two goals midway through the second-half, scored by Mark Connolly and Chris Carey.

Two-one was also the scoreline in Glin Rovers’s victory at home to Kilcornan. Tadhg Culhane put them ahead in the 15th minute and their lead was doubled with an own goal in the 70th minute. Kilcornan’s goal came in the 90th minute.

There was nothing close about the tie between Newcastle West Town and Shannonside FC, with the home team winning 7-0.

Carrig Celtic and Broadford United both played in the League for the first time last Sunday when they met in Carrickerry and it was Broadford who opened their account with a 3-1 victory.

St. Ita’s are three points clear at the top of the Division 1 table after their 3-2 win at home to Rathkeale B.

Breska Rovers moved into a three-way tie for second with a 4-1 victory at home to Knockaderry.

Glantine moved into top spot in Division 2 with a 4-1 victory at home to Breska Rovers B.

Mountcollins won 4-2 at home to Athea United on Saturday evening with goals from James Brouder (2), Matthew Brouder and Donagh Walsh.

Broadford United Reserves and Glin Rovers B shared the spoils in a 1-1 draw. Glin opened the scoring in the second-half and Paul Madigan equalised from the penalty spot.

Niall O’Connor scored the only hat-trick of the weekend when his goals helped Askeaton to a 3-2 victory away to Granagh United in their first league game of the season.

Danny Fitzgerald ensured Askeaton came away with all three points when he made two great saves at 3-2.

Abbeyfeale United moved into second place behind St. Ita’s with a 5-0 victory at home to Mountcollins. The scorers were Cathal McCoy (2), Colm Cleary, Jack Quinlivan and Liam Collins.

There are just two Cup ties down for decision on Sunday, one each in the FAI Junior Cup and Munster Junior Cup.

Pallaskenry and newly-promoted Creeves Celtic are experienced contrasting fortunes in Divison 1 at the moment. After two games each, Pallaskenry are on maximum points, while Creeves are pointless. The forecast is for league form to be upheld and for Pallaskenry to qualify to meet Shannon Town away in the second round.

Abbeyfeale United haven’t had a great start to the season, dropping more points that they’ve gained from their opening three games, while losing to Killarney Athletic in a penalty shoot-out in the FAI Junior Cup.

Nevertheless, Abbeyfeale should be able to record their first win since the opening day of the season when they host Shountrade in the first round of the Munster Junior Cup. Shountrade have lost both league games played to date and their chief concern will be to start picking up points.