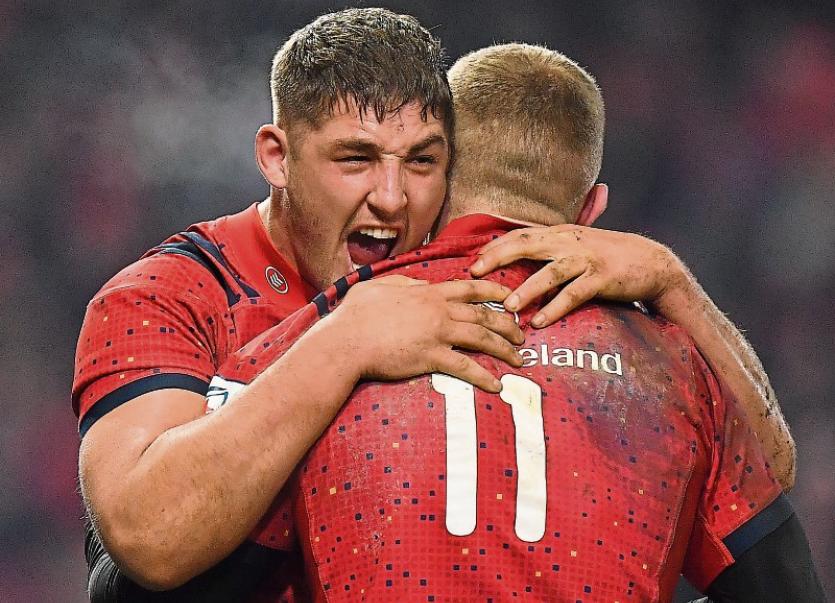 TWELVE months ago, Munster’s Dan Goggin announced his arrival on the biggest stage in European club rugby. The dynamic Limerick centre was given the nod to start Munster’s marquee Guinness PRO14 clash with arch rivals Leinster at a sold-out Aviva Stadium.

The time had come for the 24-year-old, who grew up within two minutes walk of Thomond Park, and he was determined to make the most of the opportunity.

Goggin recalled to Leader Sport: “On the day I was really relaxed for it, I had prepared in a different way than I usually do. I was more up tight and I just said to myself, ‘you just have to enjoy this occasion, playing in the Aviva Stadium in front of a full house against Leinster, a massive opposition.’

“I went into it in a different mind frame. Luckily, what came out on the pitch in my performance was really good.

“I was extremely lucky and privileged to be picked for that game. I was quite humble going into it. A lot of those little things that I said to myself really helped in putting in a good performance.

“He tells me if I am going wrong in one area and I will improve on it straight away and that honesty we have with each other just allowed him get the best out of me in pre-season.

“He had a bit of confidence in me and then for him to pick me, I was really happy with that going into the game.

“It was the kinda game I really needed in terms of progressing into the senior team or making my name known a bit more.

“Luckily, with the different mindset I took into the game, a good performance came out.”

A first start in the Champions Cup arrived for Goggin the following weekend away to Exeter Chiefs and by the end of the season, he was voted Munster’s Young Player of the Year.

A summer of change followed at Munster with assistant coaches Felix Jones and Jerry Flannery departing the province and Stephen Larkham and the soon-to-arrive Graham Rowntree replacing the pair.

Goggin is fulsome in his praise of what Jones and Flannery brought to the province in their coaching roles.

“Being a back, Felix did so much for me and for my game, he really took me under his wing from an early age. He backed me in my development and made me a better player.

“Also having Jerry there as an out and out Munster man, you can take great learning from a man like him to be a Munster man. They are both going to be missed hugely.”

Stephen Larkham’s tenure as Munster senior coach might only still be in its infancy, but Goggin has been hugely impressed with the impact the Australian has made.

“Stephen has been incredible, in fairness to him. He has come in and really tightened up a lot of screws in terms of our attack shape. Things that we thought before would have been acceptable just aren't acceptable any more.

“To give away a two-on-one or a three-on-two, to not take those opportunities just really isn't acceptable and that's the way we should be going forward if we want to really win big games and other games along the way. If we want to get to a home semi-final or a final at the end of the year we can't afford to lose small games along the way.

So can Munster fans expect to see a different style of attack play from the province this season?

“I think he (Stephen Larkham) has brought in a few different things this year that are really going to change the way that we attack. Like I said he has tightened up a few screws so things that we would have made mistakes on before, hopefully won't happen any more.

“We have a little bit of a different attack system going forward and it is something I have not seen before and I know we can definitely back it now and it will make a massive difference to the way we finish games when we play games, take opportunities and all of that, so I do think people will start seeing a difference in the way we play and in our hunger also going forward in games.”

Goggin’s centre partner from the 2014 Ireland U20s Six Nations side Gary Ringrose is a key member of Ireland’s World Cup squad in Japan this autumn.

Goggin feels he needs to improve on many aspects of his game in order to earn an international call-up, especially with the tough nature of the competitions for midfield places.

“I think there is room for improvement in every aspect of my game. There are probably other things I can add to my game as well. The biggest thing for me going into this season is really to improve on my speed, my acceleration, my power in order to make more breaks through gain line and opposition.

“There is a lot to do. There has also never been so much competition in the centre in Ireland at the moment. Like I said, without competition you won't get better yourself.

“It is the type of game where injury happens quite often, so you never know what can happen. I will obviously do everything I can in my power to make it into an Irish training squad or a camp in the first place and see where I go there. There are quite a lot of things I can improve and look to add to my game.

“Who wouldn't want to be at a World Cup, though?”.

Goggin is predicting a stern test for Munster from the high-flying Cheetahs in their Pro14 clash in Bloemfontein on Friday.

“They are never an easy team to play against and they are Currie Cup champions. They don't have many players in South Africa's World Cup squad, so they have a really consistent team week in and week out.

“After their Currie Cup win and how they started the Pro14 they will be on a high.”