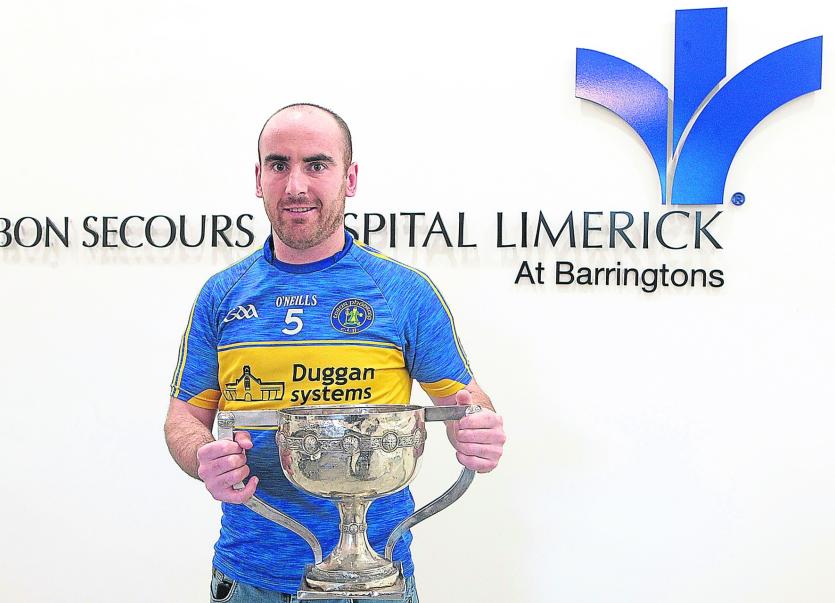 Mark Carmody with the Daly Cup

PATRICKSWELL play in a 28th Limerick SHC final since 1965 this Sunday.

But The ‘Well’ have just one Daly Cup title win across the last 15 years – meaning Mark Carmody has just one winners medal.

Patrickswell named a 41-man panel in their semi final win over Doon and just goalkeeper Brian Murray holds more than one medal.

“It’s always nice to be back involved in the tail-end of the year – that’s what we set out for last December and January. As players you are always trilled to be in a County Final and we are looking forward to Sunday,” said Mark Carmody who represented the club the media launch of the final.

“This is my third (final), I’ve lost one (2015), won one (2016) and now this one coming up. They are always nice to be involved in when they come round. As a player your competitive streak sets in and it’s where you want to be,” outlined Carmody.

After back-to-back county final appearances, the men in blue and gold fell short at the semi final stage for the last two years.

“It was something that was mentioned at half time by one of the players that we had been to the last two semi finals and within touching distance both times but didn't get over the line and that was a driving force in that semi final to get here again,” stressed Carmody.

“We have got there and we are delighted with that but we will look forward to Sunday.”

“We are a couple years older and wiser and we have got a few good young lads in like Josh Considine and others who are a new string to our bow and that are all blooded in now – that has added to us because we have a strong panel now. All these are factors that have helped us to get where we are. We have shown a bit of steel as well when we had to,” outlined Carmody.

“They are proved over a couple of years and when you are back to back champions and five in eight years, it show what they are with a few Munster and an All-Ireland as well. We are under no illusion as to the challenge but as players we are competitive and believe we can win and believe in ourselves,” said the Castleconnell NS teacher.