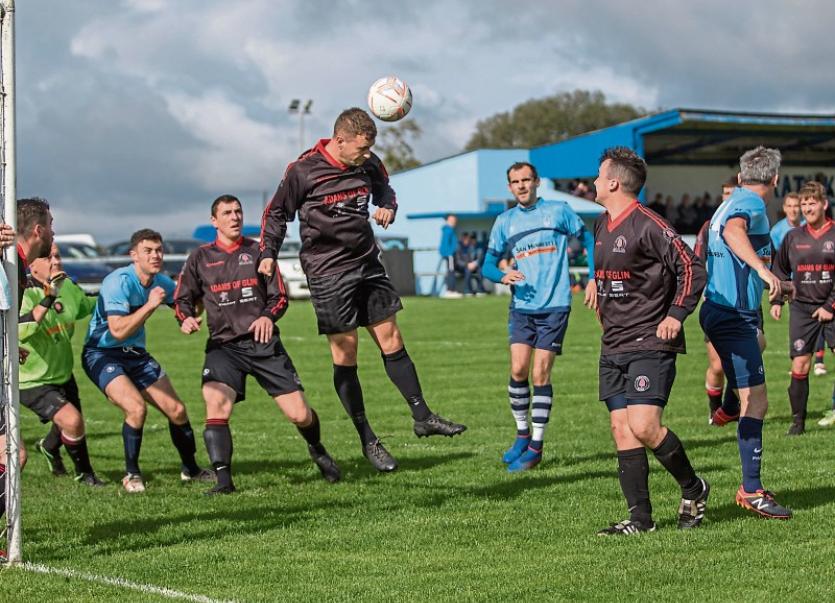 Rathkeale came out on top on a 2-0 scoreline in the all-local FAI Junior Cup second round game at home to Glin Rovers. In the 15th minute, Ahern was deemed to have been fouled in the penalty area as he got onto a cross from Barry Coleman.

Ahern took the spot-kick himself and converted. Glin battled hard to get back on level terms but didn’t manage to threaten Brendan Carmody’s goal.

With Glin pushing forward in numbers in search of an equaliser, Rathkeale scored the insurance goal in an 88th minute counter-attack when Hennessy’s cross was met with a powerful finish to the roof of the net by substitute Steven Power.

In the other all-local encounter, Ethan Keyes opened the scoring for Breska Rovers at home to Newcastle West Town but the visitors took over after that, winning 5-1 with a hat-trick from Padraig Kinehan and a goal each from Seoirse Joyce and Charlie Power.

There was good news from the two games that were played against Clare sides, Granagh United and Carrig Celtic both winning on big margins.

Granagh won 10-2 at home to Bunratty Cratloe FC. Daniel Shelton led the way with six goals and was joined on the scoresheet by Mike McElligott (2), Stephen O’Brien and MJ Purtill.

Carrig won 6-0 at home to Rineanna Rovers, with Sean Kelly and Killian Enright both bagging a brace and Ray Cahill and Eoin McEnery accounting for the other two goals. Shountrade gave a walkover to Ennis Town.

In the games against Kerry Premier sides, it was two out of three for the Limerick Desmond League sides.

Pride of place must go to Adare United who won 2-0 at home to Tralee Dynamos.

Best for Adare in a great team performance were the three central midfielders in their 5-man midfield, Rob Costello, Jeffrey Alfred and Jack English.

Broadford came from behind to win 3-1 at home to Listowel Celtic. An own goal brought them level and Jamie Keane scored twice after that.

Meanwhile it was a day to forget for Shannonside FC when they lost 11-0 away to Kerry kingpins, Killarney Celtic, on Saturday evening.

It was a historic day for Kilcornan on Sunday when the newly-promoted side recorded their first-ever win in the Premier Division with a 1-0 victory away to Abbeyfeale United.

The all-important goal came in the 35th minute when Cathal Downes raced onto a long ball and drilled into the bottom left-hand corner from the edge of the penalty area. Best for Kilcornan in an outstanding team performance were Kenneth O’Donoghue, Packie Moran and Mossie Sheehan.

St. Ita’s and Pallaskenry joined Shannonside FC at the top of the Division 1 table with 3-2 victories.

The two Askeaton teams proudly share the lead in Division 2 after both recorded impressive victories on Sunday. Sean Whelan (2), Darragh Ranahan, Brandon Murphy and Mark Ranahan were on the mark for the A-team in the 5-1 victory at home to Abbeyfeale United B, whose goal was scored by Joe Weir.

Brian Neville, Ajay Maune and Dave Holland were the scorers for the B-team who won 3-0 away to Glin Rovers B.

Meanwhile Glantine recovered from their derby defeat by Abbeyfeale United B to win 5-2 at home to Athea United.

On Thursday night, Newcastle West advanced to the second round of the Munster Youths Cup by winning 4-2 on penalties after a 2-2 draw away to Abbeyfeale United.

On Saturday, Ballingarry won 3-1 in their first round game away to neighbours Granagh United.

St. Ita’s are three points clear in the Youths League after their 9-0 win at home to Mountcollins. Ronan O’Connor led the way with five goals and was joined on the scoresheet by Eamon Carmody (2), Tristan Sheeran and Michael Noonan.

There are three Munster Junior Cup first round ties down for decision on Sunday, involving five Premier Division teams and Shannonside FC.

Kilcornan will travel to Glin in good stead on the back of their first-ever Premier win last Sunday when Cathal Downes’ goal was enough to account for Abbeyfeale United in Riverside Park.

Kilcornan are obviously well-organised defensively under manager Gary Manning, conceding only one goal in 180 minutes of action so far this season. That goal was scored by Glin, who won away to Kilcornan on the opening day of the season. Glin followed up with another league victory a week later to go three points clear at the top of the table but they suffered defeat last Sunday when they were knocked out of the FAI Junior Cup by Rathkeale.

I expect this game to be every bit as tight as the league encounter and I give Glin a tentative vote to shade it once again.

Ballingarry haven’t played since the opening game of the season three Sundays ago when they won 1-0 away to Adare United with a Dean Clancy penalty. Adare suffered another narrow defeat the following week against Glin Rovers but they came good last Sunday with an impressive 2-0 victory at home to Tralee Dynamos in the FAI Junior Cup.

The five-man midfield worked well for manager Dermot Costello on that occasion and it will be interesting to see if he employs it against Ballingarry, whose home advantage sways me in their direction.

Shannonside FC will be glad to get back to domestic opposition after their heavy defeat against Kerry’s top team, Killarney Celtic, last Saturday evening.

The Division 1 leaders will probably treat that encounter as a game best forgotten and focus instead on their 100 percent record from two league games for the trip to Newcastle West.

The hosts will have been boosted by their 5-1 victory away to another Division 1 side, Breska Rovers, in the FAI Junior Cup last Sunday.

The Weekly Award this week goes to Kilcornan who recorded their first-ever victory in the Premier Division when they won 1-0 away to Abbeyfeale United last Sunday.

Kilcornan will go into a draw with the other Weekly winners at the end of the season for vouchers to the value of €150, €100 and €50, sponsored by Chris McGill of adrenalinsports.ie, Newcastle West.