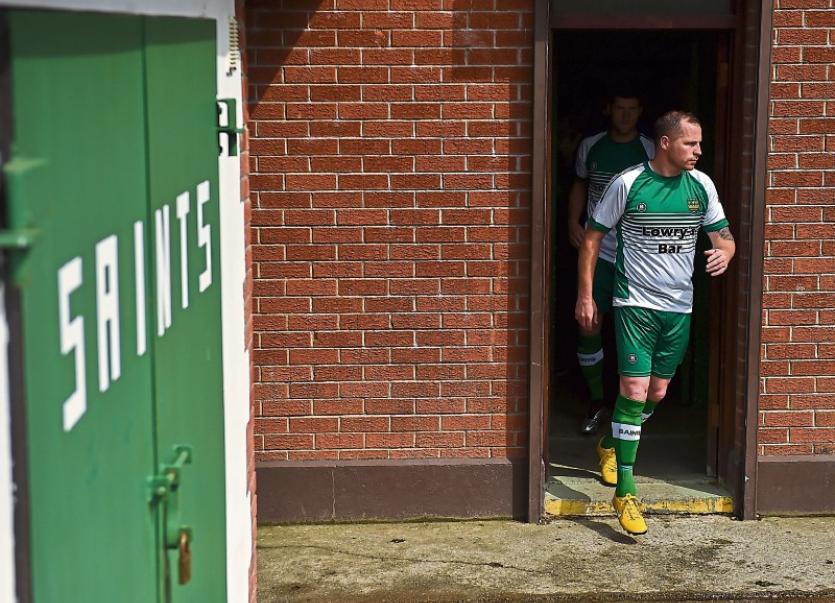 Christopher Higgins of St. Michael’s leads his side out at Cooke Park in Tipperary. They face Janesboro this weekend in the Champions Cup

On Sunday Janesboro face the daunting task of a trip to meet the all-conquering St Michaels in the Munster Champions Cup. ‘Saints’ won all before them last season including FAI and Munster Junior Cups and possess the same panel again this time out.

Without doubt they are the best side in the country now with no plans to relinquish that title.

Janesboro also had a great season winning the League title again while under the guise of Limerick DL they also captured the Oscar Traynor Trophy.

However, a bad close and early season saw them lose the majority of last year’s squad along with joint manager Aidan Ryan.

The new batch are not a bad team by any means, but they are inexperienced and will need time to bed in.

With Shane O'Hanlon at the helm and Daithi O'Donoghue back in situ you can be sure they will bounce back but might find St Michaels coming too early.

In the Premier League there are three important games down for decision.

Fairview Rgs will go joined top in the table if they can win at Coonagh Utd. Newcomers to the top flight Coonagh have been well and will relish the chance to topple a fancied Fairview side.

Fairview have added further to their squad with the addition of Steven Bradley and Clyde O’Connell and will see this as three points they must take if they wish to push for the title.

Ballynanty Rovers and Regional Utd are in the chasing pack behind Pike and the sides meet on Sunday in LIT.

Balla have added significantly to the squad with the addition of Kieran Hanlon, Stephen Kelly and Jason Hughes and with Conor Ellis in prolific form, will prove a stern test for Regional. The Dooradoyle club have shown to date that they are a resilient outfit and will not roll over lightly.

After three defeats in their opening games, Aisling are playing catch up with the leaders. On Sunday they travel across town to meet a Mungret Reg side in need of a boost after exiting the Munster and FAI Cups in consecutive weeks.

The Munster Junior Cup continues at the weekend with a place in Round Three.

There is only one Premier side in action and Kilmallock Utd will not get things all their own way when they host Aisling Annacotty B. The county side played Aisling A last weekend and conceded ten times.

Their confidence took a battering and it remains to be seen how they will respond. They made the mistake last weekend of trying to play the ball out of defence when at times a clearance was the right choice. They need to save their possession football for further up-field. They host a young Aisling side in good form and they need to guard against an upset.

Corbally visit Regional Utd B with the winners meeting Northside or Shelbourne B for a place in the open stages of the competition.

Charleville take on Newport in what could be the game of the day while Holycross host a Hyde Rgs side that knocked them out of the FAI Junior Cup last weekend.

High riding Div 1A side Castle Rovers welcome Fairview Rangers B on the back of a 5-1 reverse to Moyross last weekend. They will find Fairview no less a challenge.

Athlunkard Villa A will be strong favourites against a struggling Granville Rgs XI while Northside also carry the favourites tag at home to Shelbourne B.

Cappamore welcome Parkville Utd B while the Parkville A team renew acquaintances with Southend Utd having gone down 2-1 to the same opposition last weekend.

Expect plenty of goals when Summerville Rvs and Patrickswell cross swords and Murroe v Carew Park makes up the list.

The FAI Under 17 Cup kicks off on Sunday with a number of games worth taking a look at.

Aisling Annacotty are unbeaten to date and will be expected to maintain that run at home to Regional Utd.