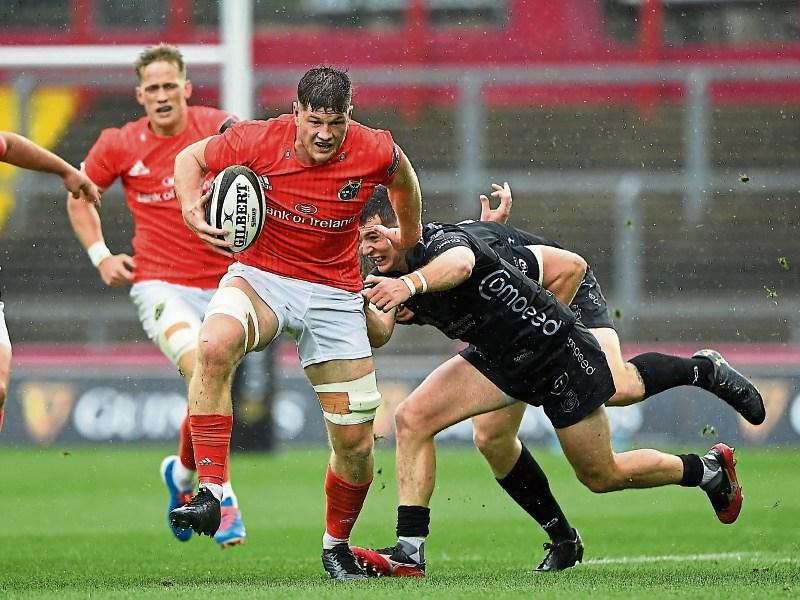 Jack O'Donoghue in action for Munster against The Dragons

THE new Guinness PRO14 season kicked off last weekend. You’d be forgiven if you missed it, however. Every four years the PRO14 comes up against the Rugby World Cup for media coverage and profile. And the league comes off a poor second best.

Take last Saturday for instance. Bleary-eyed rugby fans dug themselves out of bed all over the country at an unearthly hour to watch Ireland’s second Rugby World Cup Pool A fixture against Japan.

Those fans were full of optimism – despite the early 8.15am kick-off time – following Ireland’s impressive opening day victory over Scotland.

But that joy had turned to despair by 10.15am as Ireland suffered a shock defeat to the Brave Blossoms.

The prospect of making their way to Thomond Park four hours later to watch Munster’s opening Guinness PRO14 fixture of the season was well down the list of priorities for the majority of those Irish rugby fans.

The regular Saturday activities took centre stage, the weekly shopping needed to be bought, kids’ sports and other pastime activities needed to be tended to, the dog needed walking, granny had to be visited.

Take your pick. The reality is that the vast majority of rugby fans – other than the diehard Munster supporters – weren’t about to contemplate devoting an entire Saturday to watching ‘egg chasing’ on TV that morning in the World Cup and then live that afternoon in the Pro 14.

Just look at the coverage of the PRO14 in the national media on Sunday and Monday. Low key is perhaps the most appropriate way to describe it.

Trying to attract a large crowd to Thomond Park on a filthy wet Saturday afternoon as the nation continued with a World Cup hangover from earlier in the morning was never going to be easy.

Although the official attendance at Thomond Park was given as 10,878, that figure included a large number of season ticket holders who chose not to attend the game for numerous reasons.

The actual number of supporters inside the match venue was perhaps more accurately between 5,000 and 6,000.

Munster were shorn of 12 Ireland internationals who are on World Cup duty and minus their household names and given the wet conditions and the profile of the opposition, it was always going to be difficult to attract a bumper attendance.

Then there is the question of the kick-off time, 3pm. It’s not the most ideal, to be fair.

5.30pm is perfect. It gives supporters the opportunity to tend to their regular Saturday business and still have time to make it to Thomond Park in time for kick-off.

It also allows Munster supporters travelling to Limerick from outside of the Mid-West an opportunity to return home at a reasonable hour, especially attractive for supporters with young children.

Thankfully from a Munster perspective their next three home fixtures at Thomond Park scheduled to take place on Saturdays will kick-off close to tea time.

Munster host Ulster in Limerick in the PRO14 at Thomond Park on Saturday, November 9 at 5.15pm. That game is followed by the first two home fixtures in the Heineken Champions Cup, both of which kick-off at 5.30pm.

That schedule includes the Saturday, November 23 meeting with Racing 92 and the Saturday, December 7 clash with holders Saracens. Thomond Park should be hopping then.