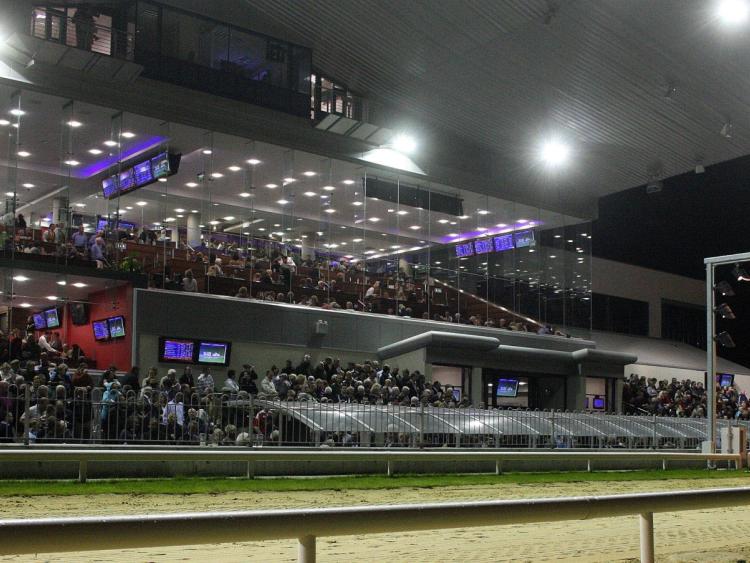 THERE were two finals in Limerick greyhound Stadium last weekend.

There was an A2 525 success for Patrick Griffin and trainer Nelius O’Connell with Clorane Cross. The winner had a length to spare in 29.11. Beaten into second place was Tullovin Sky for Michael Ryan.

The other final was a novice 525 – won by Gerard Hayes with Anhid Falcon. The winner had seven lengths to spare on the line in a time of 29.15. Back in second was Skirk Grace for Diarmuid Quinlan.

The Saturday night card opened with a sprint, which was won by Shane and Michael Enright with MaithGoLeor. In 19.26 the winner had nine lengths to spare on the line. Second was Patrick Donovan with Knockmant Rocco.

In an A5 525 Mary Ellens syndicate won with Dolla Wisecrack by all of 22 lengths. The winning time was 28.97. Second was Vigorous Joy for Ronny Wuyts.

The Brickhill Boys syndicate won an A7 525 with Blue Ballboy. The winner was seven and three quarters of a length clear on the line in a time of 29.47. Second was Patrick Sheehan with Knocknasna Blue.

Tiermana Berry won for Noel Moroney in an A5 525. The winner’s time was 29.09. Just beaten into second was Vigorous Roberto for Ronny Wuyts.

An A3 525 was won in 29.50 by unexpected Power for John Bennett and Bobby Gregg. Just beaten into second was Alberta Billy for the Cooney’s Ciaran, Darren and Donal.

Clearly Written won an A0 525 for Noel Nash and Gerry McManus. The Denis O’Malley trained winner had three lengths to spare in 28.59. Back in second was Sporry Majestic for Patrick and Ciaran Dillon and trainer John O’Brien.

There was a 10 racecard last Thursday evening.

An A2 525 set the ball rolling. Askeaton’s John O’Shaughnessy won with Bettyville Lark in 28.41. The winning distance was 28.41. Six lengths back in second was Caulry River for the Mary Ellens syndicate.

O’Shaughnessy was denied a double success in the very next race when Bettyville Trump was beaten into second in an A3 525. Victory went to Varra Biddy in 29.03 for Donal Casey. The winner was two and a half lengths clear of Bettyville Trump in second.

Airfield Heir won an A1 525 for Bernadette Walsh and trainer Denis O’Malley. The winner’s time was 28.78. A length and a quarter back in second was Portdrine Lord for Cratloe’s Liam Carroll.

Dominic Lipper and Richard Phelan won with Hows The Head in an A3 525. The Denis O’Malley trained winner had three and a half lengths to spare in 28.76. Second was Joe Shanahan with Sprout Alley.

Gleesons Bullet won for Cathal and Jason Gleeson in an A5 525. In 29.34 the winner had a length to spare on the line. Second was General Manager for Eamonn Quinn and Kathleen Browne.

Patrick Forde won with Clontemple Abu in an A6 525. The winner was three quarters of a length clear in a time of 29.65. Second was Michael Carmody with Honeypound Guci.

Poor Mans Horse won and A4 525 for Briget Casey and Brian Earley. In 29.13 the winner had a length to spare on the line. Second was Ballymartin Mac for Sean Roche and Patrick Keyes.

A sprint winner was Trevor O’Connell with Optimistic Jack. In 18.96 the winner had two and three quarters of a length to spare. The MD Walsh and James Roche trained Public Place was second.

Mary Crotty had Inislosky Joshua as an A4 525 winner. In 29.58 the winner had half a length to spare on the line. Beaten into second was Ellaha Flyer for Nora O’Malley and trainer James Roche.

The final race of the night was an A3 525. Victory went to Mohane Alice for Cormac Davern. The winning time was 29.11. Just beaten into second place was Vigorous Ella for Ronny Wuyts – his third second place finish across the three days.