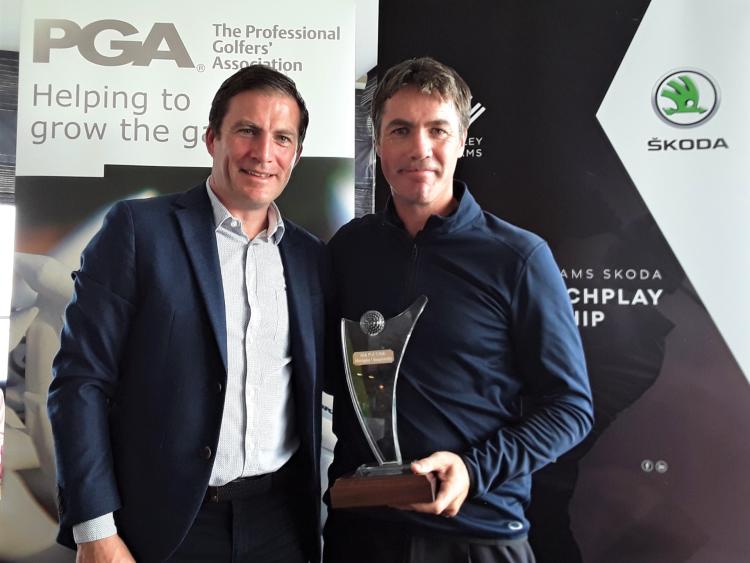 The tournament, a first of its kind on the PGA in Ireland circuit, began on Saturday morning with 32 of Ireland's leading PGA professionals battling it out in a straight knock-out format.

“Colm and I have had many battles over the years and normally it has gone his way but this time around I was lucky enough to come out on top,” said Rice.
“It could have gone either way. It was very close. At least two or three of my opponents really should have beaten me this week. I was very lucky, I don't know how it happened.”
In today's final Moriarty birdied the second to take a one-hole lead but Rice hit back with a birdie at the third to level matters. The turning point came on the par-three sixth when a three-putt bogey from Moriarty gifted Rice a one-up lead.
Colm then missed a wonderful birdie chance at the seventh to draw level and Rice grabbed his chance, holing from mid-range on the eighth to seal the win.
“This tournament was a real breath of fresh air this week. It brought us back to our youth when we played golf for the love of it,” added Rice.
“It was kind of a weird experience trying to tap back into the reason why you played the game in the first place – to beat the hell out of your opponent.
“Colm missed a short putt to give me a bit of momentum and then on that last hole if I had missed mine, I was sure he would have holed his. It was always the type of match that was going to come down to something small in the end.”
In the morning semi-finals, both finalists were taken to the last by their respective opponents.
Rice started poorly against Sean O'Donoghue (Kilkenny GC) and trailed by two holes early on before gradually fighting back to wrap up victory on the ninth.
Moriarty got off to a flyer and was two up after two, but Hogan dug deep and drew level before losing out to a par on the last.