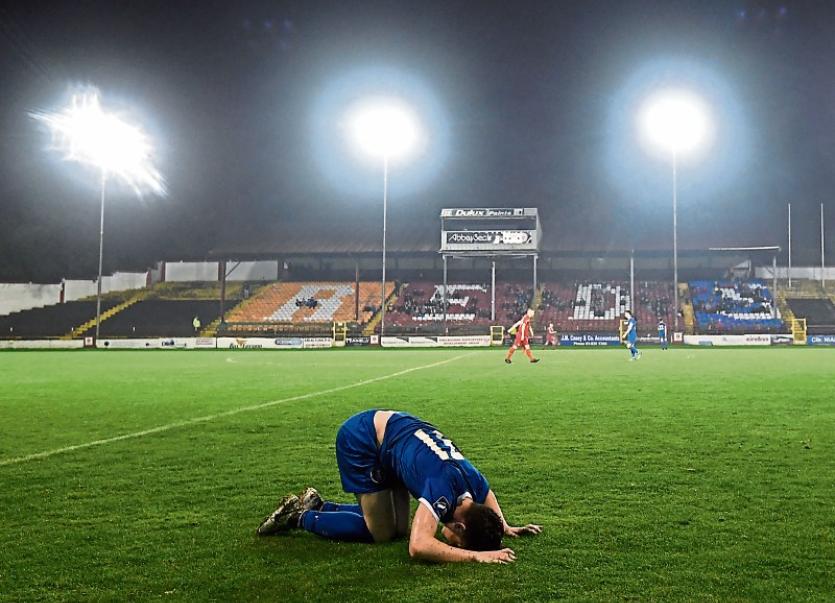 THE curtain finally came down on Limerick FC's troubled season on Saturday night when the Blues suffered a 7-0 thumping at the hands of Shelbourne at Tolka Park. Limerick FC claimed a sixth-placed finish in the SSE Airtricity League First Division following their relegation from the top flight at the end of 2018.

Off-the-field, Limerick have been dogged by problems this season.

Gardaí and FAI are currently investigating unusual betting patterns on two games involving Limerick FC, while the High Court recently confirmed the appointment of an examiner to the club.

The recent High Court hearing into the appointment of an examiner heard that there have been four, including one formal, expressions of interest by potential investors in Limerick FC, which has debts estimated to be about €490,000.

The season had begun so differently for Limerick FC as a four-game winning run in March and April which propelled the ‘Blues’ up to a lofty second place in the First Division table.

Indeed, Longford edged the ‘Blues’ for top spot only on goal difference.

Tommy Barrett’s two-year tenure as Limerick manager came to an end with the Blues final league game of the season on Saturday.

Tommy Barrett told the Limerick Leader that he does not believe a break from senior soccer in the SSE Airtricity League for 2020 would benefit Limerick FC.

“I don’t think taking a break from senior soccer is ever a good thing, but I do think that whomever is there next year, whether it stays in its current guise or whoever new might come in, a long-term sustainable plan needs to be put in place,” Barrett said.

“People need to get behind it and we need to get everyone behind us all, first and foremost the soccer community, the soccer leagues in the region. You need to have the schools behind you, get businesses behind you as well as the universities and colleges.

“You need all those on board. We need a ground to train in Limerick that is specifically a soccer ground.

“We need to build it again, work with the clubs and put that sustainable model in. It would take a lot of work to build it up.

“People need to put the past aside and drive it on. Is there an appetite for that, I don’t know.”

Barrett said: “The best option in my opinion is an All-Island league structure.

“I think if it was only the Premier Division that would be on an All-Ireland structure, that would be fine and you could regionalise the First Division.

“It would all come down to sponsorship. I think you would attract more TV, you might get Sky Sports or someone like that on board, you get more and financially it would be sound.

“You may have a mini league out of that and so the financial constraints on clubs are not as big. Something like that would be the way to go.”

Midfielder Russell had been forced to fundraise in order to pay for a knee operation. He injured his knee earlier this season against Athlone Town.

Posting on social media last week, Russell said that ‘five months after receiving a career-threatening injury I find myself still waiting on surgery with no help from my club or the FAI.’

Dundalk first team coach John Gill explained that the players and backroom team from the new Premier Division champions had recently made a financial contribution to Russell's cause.

Speaking on Newstalk's OfftheBall on Tuesday night, Gill revealed: “We all know how poorly Sean (Russell) has been treated down in Limerick with (not paying) for his operation.

“This Dundalk group, staff and group, got together this week and we made a collection and made a significant donation to Sean Russell's plight to try and help him get that second operation that he needs.

“I managed Sean in Drogheda. A couple of the lads have played with him and it was the group saying, 'let's try and do something to help this guy because it could be one of us maybe one day”