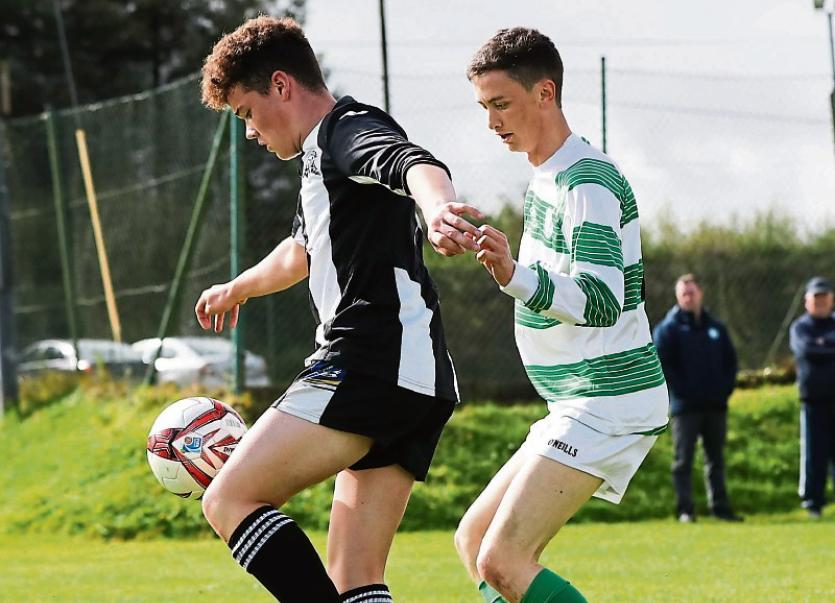 Granagh United came from 1-0 down to win 3-2 away to Carrig Celtic in the first round of the Munster Junior Cup. Understrength Carrig opened the scoring in the 15th minute when a clever quick free-kick from Dean Liston put Seanie King through on goal and the striker slotted confidently past the advancing goalkeeper.

Granagh equalised in the 18th minute through Edward Sheehy and went ahead in the 41st minute when Mike McElligott finished to the net after being set up by Alier Ajuong, who made it 3-1 in the 58th minute by lifting the ball over the oncoming keeper in a breakaway attack.

Carrig pulled a goal back two minutes later when King scored on the rebound from a free-kick by Sean Kelly.

St. Ita’s advanced to the second round by winning 5-4 on penalties after a 2-2 draw at home to Breska Rovers. They led 2-0 with an Eamon Carmody goal and a Martin Mullane penalty but Breska forced extra-time with a goal from Niall Quane and a late equaliser from Diarmuid O’Connor.

Rathkeale had an easy 7-0 victory at home to Breska Rovers B. Pa Ahern and Keith Harnett both bagged a brace and the other scorers were Jack Hennessy, Declan Nash and Steven Power.

It was looking good for Abbeyfeale United in the second round of the FAI Junior Cup when they led 2-0 after 36 minutes away to Killarney Athletic with excellent goals from Thomas Sexton and Cormac Roche.

Killarney pulled a goal back before half-time and equalised midway through the second-half. There were no further goals in normal time or extra-time, which led to a penalty shoot-out. Abbeyfeale gave themselves a mountain to climb by missing the first three penalties and they lost 4-1.

The game between Creeves Celtic and Pallaskenry was abandoned in the first-half, with the score at 0-0.

Glin Rovers are top of the Premier Division table after coming from behind to win 2-1 at home to Adare United, whose opener was a brilliant goal midway through the first-half from Robert Costello. Ed Horan equalised on the hour and Tadhg Culhane headed the winner from a corner in the 70th minute. Mike Stack made two great saves to ensure that Glin held onto all three points.

Shannonside FC lead the way in Division 1 after winning 2-0 at home to Shountrade with second-half goals from Mike Behan and Daniel Conroy.

Kildimo United opened their account with a 3-2 victory at home to Knockaderry. Liam Wilson opened the scoring for Kildimo and the visitors drew level before half-time. Two goals from Michael Watney, the second of them a great finish, put the home team 3-1 up until Knockaderry pulled a goal back from the penalty spot in the 80th minute.

Newcastle West Town Reserves and Rathkeale B shared the spoils in a 2-2 draw, Charlie Power scoring both goals for the home team.

Abbeyfeale United B had an impressive 5-1 victory in the derby game at home to Glantine on Saturday night. Joe Weir netted a hat-trick and he was joined on the scoresheet by Jonathan Lyons and Paddy Harnett.

Abbeyfeale are joined at the top of the table by Glin Rovers B, who won 3-1 away to Mountcollins with goals from Padraic O’Connor (2) and Ollie Wallace. The Mountcollins goal was scored by John O’Connell.

Askeaton B won 1-0 against Askeaton A last Sunday week and it looked like they might double the dose when Ajay Maune put them in front in the 10th minute. John O’Shaughnessy levelled from a corner and Mark Murphy put the A-team ahead from a deflected free-kick. Sean Whelan completed the scoring at 3-1 with a wonder strike in the 80th minute.

Newly-promoted Adare United have no points after two Premier games but that shouldn’t disguise the fact they were very competitive in both, losing on a single goal margin to both Ballingarry and Glin Rovers. Adare shouldn’t have to wait too long for their first win but it is unlikely to come on Sunday, as visitors Tralee Dynamos, while not being the force they once were, have strengthened since last season and are hopeful of a decent campaign in Premier A this season.

This game represents the best chance for a Limerick Desmond League side to win against Kerry opposition this weekend. Listowel Celtic are a good young side but Broadford United, who are expected to be at full strength, can be backed to come out on top, with recruits from last season’s Youths treble-winning side ensuring that there will be plenty of competition for places, with much interest on who will be chosen to replace attacking midfielder, Micheal Brosnan, who departed for America during the summer.

After their opening two games, Shannonside are on six points, a total it took them six matches to reach in Division 1 last season.

They are three points clear, which will put them in a good frame of mind as they travel to the Kerry South capital for a 7.30 kickoff on Saturday evening. However, it will be a major shock if they manage to beat Killarney Celtic, who continue to be the dominant force in Kerry, winning the League yet again last season. Both sides feature players who have given great service to the game, Mike Behan for Shannonside and James Sugrue and Stephen O’Mahony for Killarney

Ennis Town have started poorly in Clare Division 1, with just one point from their opening three games. Their impressive under-age structure suggests they will come good at some stage but it doesn’t appear to be happening just yet. Shountrade’s only game of the season so far was a 2-0 defeat away to Shannonside lasts Sunday. Home advantage may prove decisive in a game between two sides searching for a spark.

Granagh United will need to watch out for Bunratty’s tricky right-winger, Dylan Kerr, but the home team should be able to build on their impressive start of a draw away to Rathkeale and a Munster Junior Cup victory away to Carrig Celtic.

Carrig Celtic were missing a lot of players for the 3-2 defeat to Granagh United last Sunday. If they are closer to full strength then they should be able to account for visitors Rineanna Rovers, though much will depend on how St. Kieran’s get on in their County Senior Football semi-final on Friday evening.

Glin Rovers, under the new management of Ambrose Lanigan, sit proudly at the top of the table after two games. League Champions Rathkeale were held to a draw by Granagh United on the opening day of the season but were in free-scoring form last Sunday when putting seven without reply past visitors Breska Rovers B in the Munster Junior Cup.

Breska Rovers finished last season by winning the Division 1 League Cup and carried on the good work by winning 2-0 in their opening game of the season away to Creeves Celtic.

They won’t be too concerned by their penalty shoot-out defeat away to St. Ita’s last Sunday. Newcastle West Town had a new-look midfield in Dylan Moloney and Ray Brouder when they opened their campaign with a 4-1 defeat at home to Abbeyfeale United.

Noel Murphy’s charges should be a stronger force once he gets the team to gel and that process could be given a boost on Sunday.