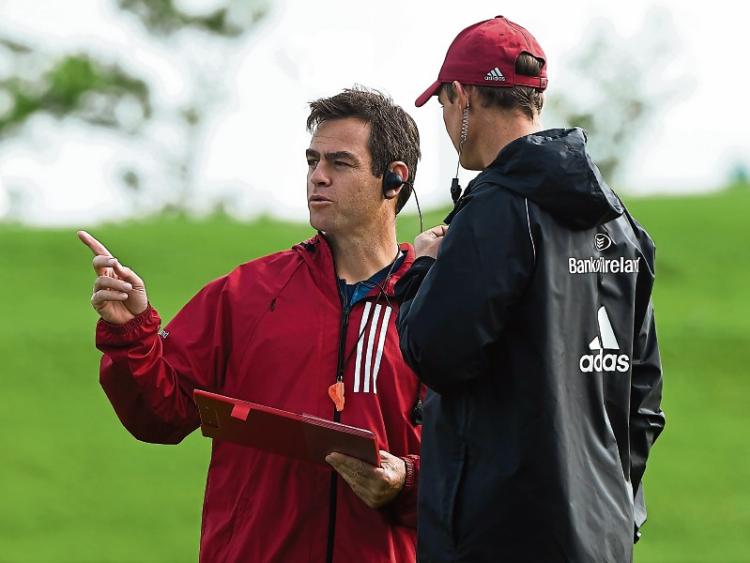 HEAD coach Johann van Graan insists Munster Rugby is built on a sense of community and on home grown talent from the province along with a sprinkling of players from other parts of Ireland and overseas. With 12 Munster players currently away on World Cup duty with Ireland in Japan, Munster are set to give gametime to a significant number of their younger playing squad, including Academy members, in the coming weeks.

Munster kick-off their Guinness PRO 14 campaign with a home fixture against the Dragons at Thomond Park this Saturday, 3pm.

The Munster squad then jet off to South Africa over the weekend to play two PRO14 fixtures on successive weekends against the Cheetahs and Southern Kings.

Van Graan said they had looked to bring about a mindset change in players who they want to see as having the ambition not only to play for Munster, but for Ireland too.

“It’s still a bit early yet to say we are seeing the rewards of it, we are all very aligned as to what we want to achieve and what type of player we are looking to deliver.

“The fact that the alignment between the senior team, the Academy and then the development side, what’s to come at school, that is the line exactly what we are looking for.

“That is what Munster is built on, on community and home grown players. You will always  have foreign players and always have Irish players from different parts, but this club is built on people from Munster and that is what we are looking to continue.

Van Graan is looking forward to getting the competitive season up-and-running this weekend, a month later than normal with the World Cup taking place in Japan.

“We are very excited to get going,” Van Graan enthused.

“We felt we planned our pre-season very well to integrate the Academy players. I think there were eight debuts for Academy players in the two warm-up games if I am not mistaken.

“We used more than 30 guys in the two warm-up guys to integrate the academy guys, to expose guys and look at different combinations.

“All teams are on zero points now and we play for points from the week-end. We’ll look to map out the playing time, especially over the next four or five months with our Academy lads, you have the Celtic Cup. We have a tour (to South Africa) very early

“You have World Cup players who are going to come back, some will rest more than others, so that will be good planning going forward, but in terms of this week-end everyone is rarin’ to go.

“Obviously some are going to be disappointed because everyone wants to play the first game of  the season, but  there are 21 rounds of  this competition and we are starting at home and looking for a solid start against the Dragons on Saturday.”

Van Graan agrees that both sides will see Saturday’s game as a big opportunity.

“Every team will look at every game as an opportunity. Obviously, they (Dragons) will probably look at this as our second string side with 12 players away at the World Cup. We don’t see it that way. We are Munster playing on Saturday against the Dragons. The focus is on ourselves in the first game of  the season.”

The Dragons have not won away from home in the PRO14 since March 2015.