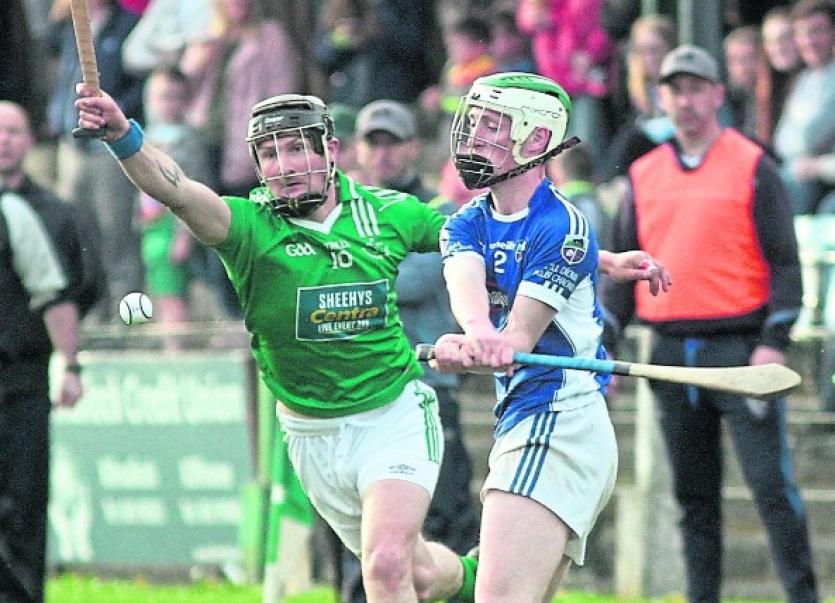 Action from the round 3 meeting of Blackrock and Kildimo-Pallaskenry

THE 2019 Lyons of Limerick Premier IHC final will be between Blackrock and Kildimo-Pallaskenry.

The duo will meet on Sunday October 6 in the LIT Gaelic Grounds as the curtain-raiser to the county senior hurling final.

When they met in round three of the group stages back in April they finished level, 1-16 each.

The county final winner will be promoted to the senior ranks for 2020 and will also represent Limerick in the Munster club IHC in a Limerick venue against the Cork champions (Kilworth, Inniscarra, Blarney or Fr. O’Neills) in a November 3 quarter final.

In this Saturday's semi final double-header in Kilmallock; Blackrock were 3-18 to 2-12 winners over Mungret and Kildimo-Pallaskenry scored an extra time 2-20 to 2-9 win over Bruff.

Blackrock trailed Mungret 2-8 to 1-5 at half time.

Richie Burke had both Mungret goals as they opened a 10-points lead but crucially Ruairi O'Shaughnessy had a goal for The Rockies in first half injury time.

In the second half Adrian Cooke's goal levelled the game at 2-10 each and the Kilfinane-Ardpatrick men soon added another goal via Kevin Palmer.

Helped by 10-points from captain and free-taker Paudie Leahy, Blackrock completed a 19-points turnaround to reach the final and again see Mungret denied at the semi final stage.

In the second semi final, it was level at half time - Bruff 1-4 Kildimo-Pallaskenry 0-7.

John Cooke had the goal for Bruff, who were beaten county finalists last year against Garryspillane. Kildimo-Pallaskenry failed to score from play in the half with frees from Shaun Barry, Adam Butler and goalkeeper John Chawke.

On the restart Kildimo-Pallaskenry dominated and moved 0-11 to 1-4 clear with Bruff yet to reopen their scoring and down to 14-men.

But Bruff battled back and in the fourth minute of injury time Danny O'Leary drilled a free to the net to force extra time - 0-13 to 2-7.

Kildimo-Pallaskenry laid the foundation for their victory with a sparkling 2-6 without reply in the first period of extra time - goals from Dylan Corrigan and Shaun Barry.

It was Kildimo-Pallaskenry 2-19 to 2-7 by half time with Kyle Hayes among their point scorers.

* See the print editions of the Limerick Leader newspaper for full match reports.