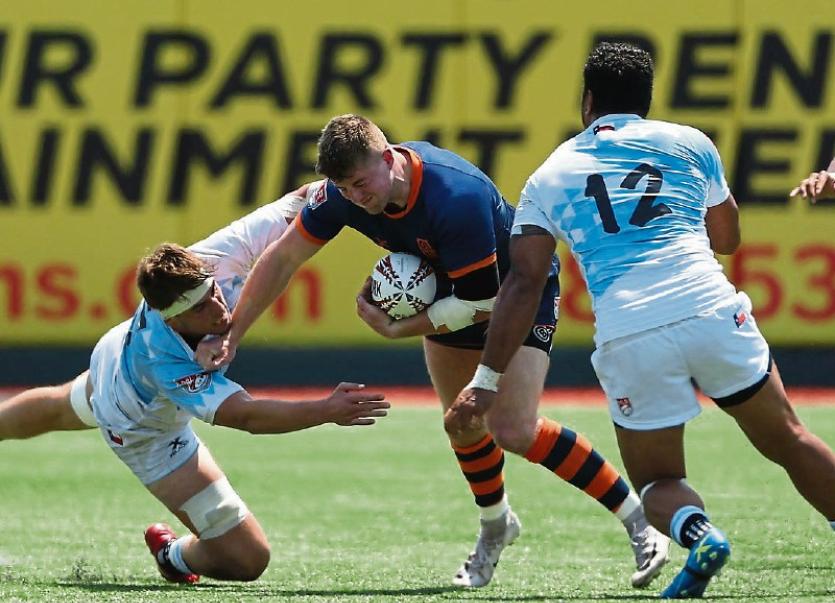 Will Leonard in action for NY Rugby

Where did you get your love of rugby from?

Will Leonard: “I actually lived in Cork up until the age of eight. I didn't start playing rugby until I moved to Limerick.

“I started playing down in Coonagh with Shannon, coached by my father and Harold Brown, Kelvin's father and we had a very good team the whole way through at under-age, very successful. A lot of those players are professional at the moment!”

WL: “Crescent Comp had a massive influence on my development as a rugby player. I had the opportunity to be coached by some great coaches, like Len Dinneen, Niall O'Shea, Tony Trehy, Conan Doyle and Eugene McGovern.

“They taught me a lot about the game and that coupled with having a very good team, a lot of players who went on to play pro rugby and at a high level in the AIL.”

You won a Schools Senior Cup with Greg O'Shea in 2013. Did you watch him on Love Island?

WL: “I am kinda ashamed to say I was glued to Love island this year, even before Greg went in! I had seen a post on social media saying he was going in and I thought it was a joke.

“It was a massive shock and then to see him on the TV a few days later was a bit surreal. Fair play to him, he had the balls to go in, I suppose, go on live TV and put himself out there which you got to admire.

“He seems to be doing very well for himself now, he has a lot of things going for him at the moment. I sent him a text when he won to congratulate him and we were both kinda agreeing how mad the whole thing was.

“He had gained 1.5 million followers on social media over the space of two weeks.”

Was joining the Munster Academy on your radar after secondary school?

WL: “I played U20s with Munster under Peter Malone and Keith Murphy. We had a fantastic team and I was playing some of the best rugby of my life at that time.

“I had a great interpro series and was probably in line to get some sort of Academy contract, but that just wasn't what I was interested in at that particular time. I was more interested in the socialising and going out.

“The Munster U20 coaches had asked me was pursuing a professional career in my interests and I said it wasn't.

“I was getting texts, even a couple of months after that asking me to go into different Munster camps, training sessions, stuff like that, and I just wasn't interested at all at that particular time which looking back on it now is a huge regret.

“I probably missed an opportunity there, but you know such is the way things work out. People develop not only different physically but also emotionally and mentally as well. Such is life.”

You have a First Class Honours Degree in economics and finance from UL. When did becoming a pro rugby player come back on your agenda?

WL: “My final year in college was the first year in a while that I decided to concentrate big time on rugby with fitness, in the gym, diet and all that. It was a few years before that when I was just out of school I had lost the love of rugby I had.

“I was kinda more interested in the social side of it, going out on college nights and all that sort of stuff. It was that summer before I went into final year that I had kinda decided I wanted to get back into it, get fit and get everything right.

“Funnily enough, that year I started performing again and started enjoying rugby. I never really had much idea if I was going to go pro, but I was concentrating on my AIL performances at that stage.”

How did chance to go to Rugby United New York come about?

WL: “Towards the end of my final year at college, about two years ago, I had started hearing about Major League Rugby. I started looking into it, emailing people, getting on Linkedin, talking to different people, sending on highlight clips.

“I wasn't really getting anywhere and eventually I got in contact with James Kennedy. I had a conversation with him not long after that and the rest is history.”

What were your first impressions of New York?

WL: “It was completely surreal, landing in New York and realising that this was going to be my home and where I was going to play rugby for the foreseeable future. My first impressions of my team mates was that they were all good lads, sound lads.

“We had a couple of nights out when I came over, just before pre-season and we had great craic and it helped me settled in straight away.”

You have been playing alongside England and Northampton star Ben Foden in the centre, what was that experience like?

WL: “It was definitely a bit surreal at the start meeting him and playing with him. I had seen him on TV with Northampton and England growing up.

“Everyone always asks me questions about what is Ben Foden like? I suppose they expect me to certain things based on what they see of him in the media, but I have nothing but good things to say about it. He has been an absolutely fantastic member of the squad. He has taught everyone a lot about the game.”

How has your first season over in New York been for you?

WL: “I thoroughly enjoyed my first season. It was absolutely fantastic, the different experiences I had, people I met, places I saw. Standard-wise on average the skill level would have been similar to Division 1A back home.

“Then as you are playing the better teams, the top four in MLR would be a pretty good standard, I would imagine it would be similar to B&I or maybe even some PRO14 games. It is probably a bit more physical than the AIL, you have a lot of big, crossover athletes and islander lads that are massive.

“The travelling has been a big thing to get used to. It's tough. The first few weeks we were in San Diego, Seattle, New Orleans, Utah, Heuston, I think four or five weeks in a row we were travelling and it was like four or five hour flights, so that was definitely tough.

“I definitely think my game has improved, just being under coaches like Mike Tolkin and Keith Lensing last year, I learned an awful lot from them and also from playing with guys like Cathal Marsh and Ben Foden, who really taught me a lot about the game.”

When does pre-season for 2020 Major League Rugby start for you?

WL: “I was fortunate to sign a three year contract when I came over, so I have another two years left on my contract. When the season finished I chilled out for a couple of weeks, went off and visited friends in Vancouver. Ever since I have been back I have been getting back into training.

“The ambition has to be for New York to win it next year. We got to the semi-final last year and were beaten with a last minute kick.”

What is your medium and longer term goals in rugby?

WL: “I'm enjoying my time here at New York, kinda getting to know the game more and improving my game personally and learning a lot from other players.

“Definitely in the medium to long-term I would love to challenge myself in one of the European leagues or even back in Ireland, that is something I would definitely love to do.”