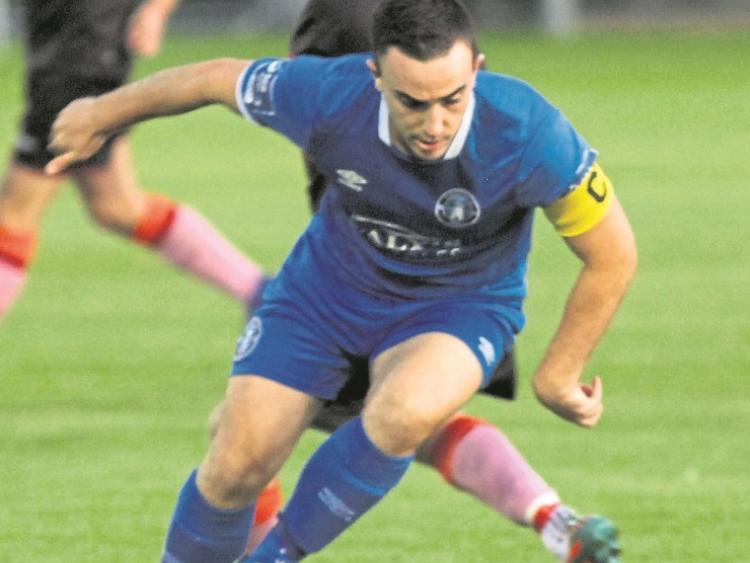 LIMERICK FC stalwart Shane Tracy, who captained his side to a convincing 4-1 victory over Wexford last Friday night, has remained tight-lipped over his future on the pitch endeavours.

The former Arsenal youngster who returned home in 2007 to sign for Galway United before permanently putting pen to paper for his hometown club Limerick at the start of the 2009 season.

In the aftermath of captaining a very inexperienced team in the absence of the suspended Shaun Kelly, Tracy, who turned 31 on Saturday, says he remains unsure what the future holds, as Limerick’s latest campaign comes to its conclusion.

“All season it’s been about trying to enjoy each game,” he said. “I’m pushing on 12 seasons [at Limerick] and a couple of seasons up in Galway as well so 14 years playing is obviously a long time”.

“I’ve been just trying to enjoy each game as it comes, looking after my body off the pitch with regard to working wise.

“Recovery is more important at this stage of my career rather than pounding out on the pitches in UL trying to get my fitness up. That is just the way it goes in football, everyone is the same as you push on. It has been enjoyable, the football side of things. You just don’t know what way things go in football, we’ll just play the last few games,” said the versatile Garryowen native.

With the exception of Tracy and veteran Robbie Williams, Limerick fielded an extremely young team against Wexford made up by the majority of former Limerick FC youth academy players.

Despite an ongoing examinership process, Tracy believes the future can be bright if Limerick continue to invest in youth, an investment which saw youngsters Adam Foley, Lee Devitt and Karl O’Sullivan join the stand-in captain on the scoresheet against the First Division basement side.

“It was great to score goals, it gives the fans something to cheer about,” said Tracy.

“In fairness to Lee [Devitt] he has come in as a bit of an unknown, I don’t think we heard him speak for about six months,” he smiled.

“His first game, he came in a couple of months ago - I think it was Bray and he took the game by storm and took us all by a bit of shock.

“He has grown from there to be honest to the lad and he has shown no fear. He’s been very good.

“Adam Foley worked very, very hard in training. He is a very, very good finisher and he has just constantly worked on his game. I was delighted to see him get his goal.

“We all know the ability Karl O’Sullivan has and it is great to see him putting that into goals and assists.”

In spite of ongoing off the field circumstances and financial restraints within the club, Shane Tracy reminisced on a season which saw the Blues unexpectedly remain in contention for a promotion play-off spot until midway through the summer.

“We lost some players in the middle of the season and any team that loses a couple of players, it’s going to obviously handicap them a little bit.

“It is just a pity that we weren’t able to maintain that level of consistency through that middle period.

“A lot of young kids coming in and you have to give them time to come into that kind of environment in the middle of the season – it is hard for some of them. Injures as well played a part.

“It was unfortunate, we were hoping to continue that bit of momentum. No one wants to be playing the last games with nothing to play for.

“It was a pity from that sense but it gave young lads an opportunity to come in and play. Would they have got that opportunity if we were kind of pushing [for promotion]? We don’t know.

“The future is bright from them [young players] coming through, you can see that there is some good talent, so that is a positive to take out.

“Maybe there is an opportunity there now to build a good squad and get a good local team together. It just shows what talent Limerick has. We’ve always had players coming through that are Limerick based.

“If we can get lads in that can work hard for each other, which we showed his year, and the boys go away and look after themselves in the off season, work on their own strength and conditioning, and come back fitter next year you just don’t know what way football can go,” he concluded.