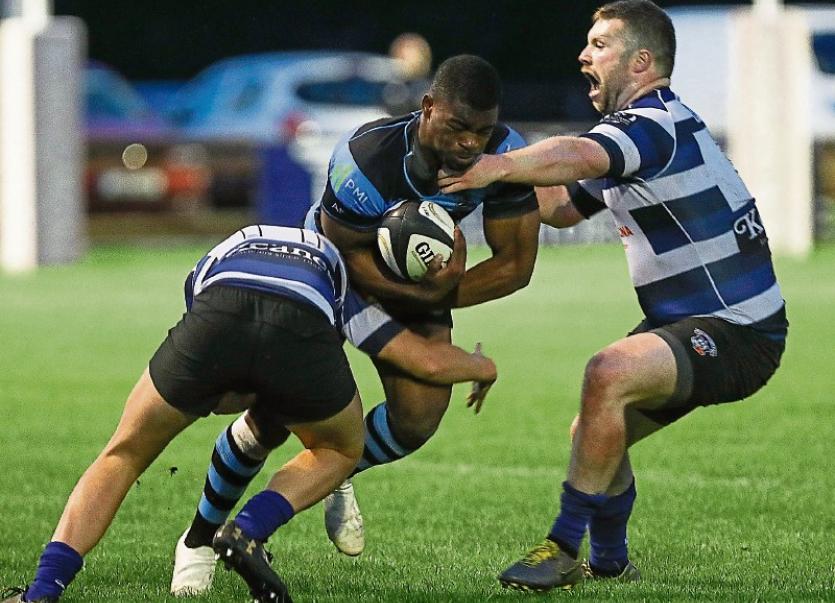 Shannon's Ikem Ugwueru is caught by the Old Crescent defence. Both sides are in Cup action

THREE Limerick sides are in second round action in the Bank of Ireland Munster Senior Cup this week. The action kicks-off on Friday night when Limerick Charity Cup finalists Old Crescent host Cashel at Rosbrien at 8pm.

Old Crescent have made an encouraging start to the season, edging past Shannon and Bruff to reach the final of the Limerick Charity Cup.

There are two Limerick clubs in Munster Senior Cup action on Saturday. UL-Bohemian, fresh from their weekend win away to Midleton, host Sunday’s Well at Annacotty, 2.30pm.

Should Old Crescent and UL-Bohs successfully come through their second round ties, the Limerick rivals are due to meet in the quarter-finals.

UL-Bohs and Old Crescent are already due to face-off in the opening round of Division 2A fixtures in the Energia All-Ireland League on Friday, October 4, 8pm in UL.

Old Crescent head coach Matt Brown, who is in his second season in the position, said: “There is a lot on the horizon. Ultimately I would be wrong if I said getting into the promotion play-off hunt wasn’t our aim this season, but it is about working on the process.

“There are so many things we need to do better. If we get that right we are in good shape and the results should look after themselves although that is something of a cliche.”

UL-Bohemian booked their place in the second round of the Munster Senior Cup with a comprehensive 29-0 away victory over AIL 2C side Midleton at Towns Park on Saturday.

The Annacotty side led their hosts 15-0 at half-time, with tries from Colin Ryan and Rory White, while Alan Kiely kicked a penalty and conversion.

Ryan and White also dotted down in the second half to seal an impressive win.

Should the Parish side overcome their Cork hosts they will face local rivals Young Munster in the quarter-finals.

Shannon will be looking to bounce back to winning ways after their narrow Limerick Charity Cup loss to Old Crescent at Rosbrien.