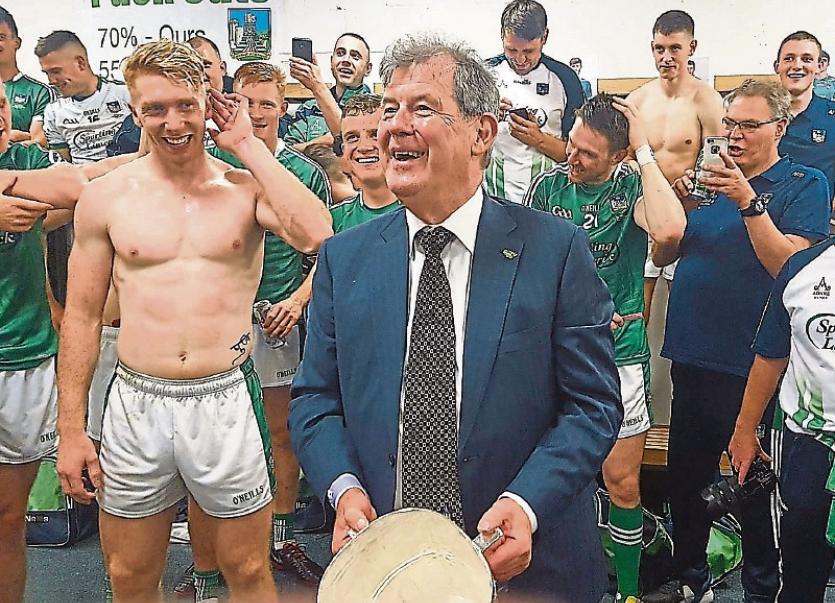 JP McManus with the Liam MacCarthy Cup in 2018

In the past I have written about the cosy position that Limerick GAA finds itself in. I am not really sure people fully understand the commitment that JP McManus has made to Limerick GAA. His generosity has made so many things happen in Limerick and the Mid-West but his loyalty to Limerick GAA has been truly remarkable.

I state again that Limerick would not have won the All-Ireland title last year were it not for him making the project possible.

In reality he provided the resources to bring the backroom team together but that was only one part of the project.

JP McManus’ support has allowed Limerick operate in elite status. The team, the management wanted for nothing and very few counties are in such an elite position.

Having talent is a basic requirement for success but that alone is no guarantee of entering the winners enclosure. Limerick have had many talented players and teams in the past but they came up short.

Some of that, in my opinion, was because we had some players who didn't prepare as well as they could have.

Limerick had to change. In this case it was not just about money, it was about getting the right people working together at the same time.

The support of JP McManus allowed Limerick to go after the best people. If anyone thinks this happened by accident then they are greatly mistaken.

It came about because people outside of the County Board knew they needed to push the boat out even further and in doing so they got the management team they wanted.

It was a project but more over it was driven by all parties. Nothing was left to chance but it was the support of McManus that allowed things happen.

Year after year JP McManus has offered steadfast support to Limerick GAA. He kept the County Board alive when it could well have gone under without his support.

Only a few counties have the sort of support that he is able to offer Limerick. Dublin have taken matters to a new level in recent years. They have enjoyed huge success but again it’s a project, just like a business they have targets not just for their senior team but at every level.

Tipperary joined the club this year. They brought a new sponsor on board and that allowed Tipperary mirror what was going on in Limerick.

They have a new finance team also appointed and this operates outside of the County Board. Quite simply, I believe, that County Boards do not have the personnel, experience or ability to do what is needed now.

What JP McManus is doing for Limerick should not be taken for granted. The Limerick players have worked very hard but they have been looked after really well.

It is only right that they are but they too must be aware of the elite position they enjoy. There was a time when it was very different for lads playing at county level in Limerick. Ballybunion wasn’t even on the agenda not to mention Barbados.

We have seen a lot of change in the GAA in the past few years. Not all of that change has been for the good but it looks like unless you have a major sponsor going forward it will be very difficult to compete.

Limerick have the luxury not only of a great sponsor but more importantly a man that loves the GAA. His love was fostered in South Liberties and it says a great deal about the man that he never forgot where he came from. He is as happy watching a match in Caherconlish as he would be at any sports venue in the world.

Limerick are in a position that could see them really competitive for a few years. They will have learned some really valuable lessons this year.

Most people still hold the view they left another title behind them. They have the resources backing them and at every level it needs to be appreciated and used to its best potential.

There is a duty on the Limerick County Board to grab the opportunity also. I hold the view that the entire coaching system in the county needs to be looked at.

The greatest asset we have is our national schools and this area badly needs to be refreshed, refocused and supported.

If the Limerick County Board does not grasp the opportunity now we will face dark days again in the years ahead. #

Limerick needs to appoint a new committee to address these matters. Put in place key people and they will get results. I think Eibhear O’Dea would be the ideal man to chair this committee.

The McManus brothers have given superb support to Limerick. Gerry can equally take a lot of credit for his sponsorship of the Limerick Academy.

That support has been responsible for developing so many young hurlers. I have noticed over the past few years that players coming into the academy at U14 have lacked a great deal particularly in skills.

If you notice after two years in the academy they have improved greatly.

It backs up my point that a great focus on development is needed in clubs and schools. Some work is now being done at U13 level in the divisions and this has potential for development.

Good coaches and a link to the academy is needed and targeted results will result in players going to the Limerick Academy ready and open to further development.

Winning does not happen by accident and proof of this has been the success of the academy in Limerick.

The Division Boards could have a major part to play in the development of the U13 grade in the divisions.

A great sadness hung over Limerick GAA last weekend when the news broke that former Bruff and Limerick player James Browne had passed away.

He played at every level for his club and played in the 1991 Munster minor final with Limerick. He also played some senior games.

James Browne was a talented hurler who won many titles with his club and also won national titles in other sports. The Browne family have given great service to their club and Limerick. It would have been fostered by their late father Michael (Mike) who gave outstanding service to Bruff.

In recent years James played a central role in developing camogie in Crecora. He was selfless with his time and played a key part in bringing so many players through.

People stood for six hours to pay their respects. His goalkeepers hurley stood at the end of his coffin while the number one jersey draped over it.

James followed Limerick to every match, he also took a great interest in colleges hurling and where possible attended many of the games.

James was happy helping people and he did a great degree of that without much fuss.

To his wife Ethel, daughters Ciara, Sinead Meave and extended family I offer my sincere sympathies.