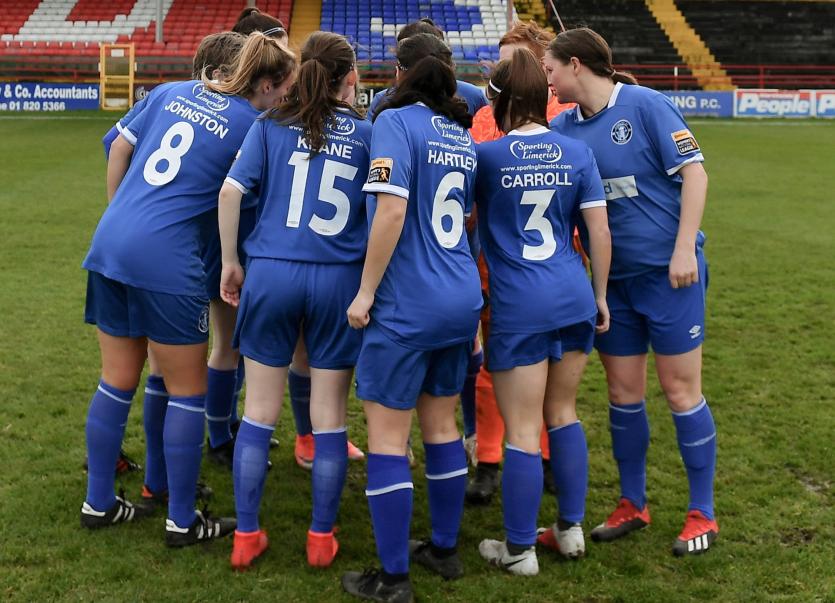 LIMERICK FC Women crashed out of the So Hotels FAI Women’s Senior Cup at the Markets Field on Sunday afternoon following a heavy 5-1 defeat to last year's finalists Peamount United.

Goals from Naima Chemaou , Eleanor Ryan-Doyle, Louise Corrigan, Claire Walsh and Aine O’Gorman gave James O’Callaghan’s visiting side a five goal advantage at half time before Cara Griffin pulled one back for the hosts in the second half.

Peamount were a goal to the good with only a minute gone on the clock as Naima Chemaou took full advantage of a superb Aine O’Gorman cross to give Karen Connolly no chance.

Credit to Limerick, the home side stuck to their game plan but a well-worked passage of play ensured that the Dubliners were two goals up with 16 minutes gone at the Garryowen venue.

Megan Smyth Lynch and full back Lauryn O’Callaghan linked up well out wide before O’Callaghan picked out Eleanor Ryan-Doyle in the box as the Só Hotels Women’s National League Player of the Month for June found the net against a stretched Limerick defence.

With Peas coming into the game on Shannonside as clear favourites, it was no surprise that they were three goals ahead when Louise Corrigan found herself in space in the six-yard box to extend her sides comfortable lead.

Megan Lynch Smyth’s quickly taken corner found Corrigan, before the towering lively centre-back made no mistake with a header from the middle of the box.

Less than two minutes later Peamount grabbed their second goal from a corner and their fourth of the afternoon when Claire Walsh headed home a perfectly placed Lynch Smyth cross, an impressive set piece straight from the training ground.

The hosts grew into the game as the first half came to its conclusion and a fantastic save by Connolly to deny a long-range strike from Naima Chemaou gave Dave Rooney’s side a much-needed morale boost with half an hour gone.

Peamount had their fair share of chances in the second half to add to their five goal advantage but an impressive performance from Connolly kept the visitors at bay.

Limerick grabbed a consolation goal with 15 minutes remaining, a well-deserved reward during a much-improved second half performance from the hosts.

The game petered out in the latter stages as the Newcastle-based side ran out comfortable 5-1 winners despite a second half revival from Dave Rooney’s young runs.