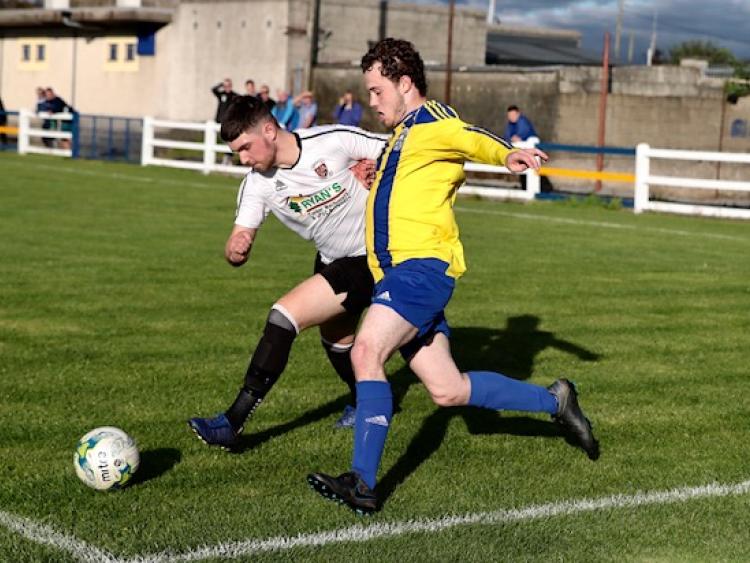 Pike Rovers 5 Nenagh AFC 0 - Pike Rovers took over top spot in the Premier League last evening with a 5-0 win at home to Nenagh AFC. A hat trick inside 20 minutes by the mercurial Colin Daly killed off any Nenagh challenge.

The game was only two minutes old when Daly fired in from Evan Patterson’s pass and eight minutes later slipped the ball under the keeper for his second. The hat trick was completed on 20 minutes, Daly on the end of a sweeping move.

Before the break Jonathan Grant finished off a Shane Walsh delivery to make it 5-0.

The flood gates could have opened after the break but to their credit Nenagh showed plenty of pride and character to keep the Hoops at bay for the remainder of the game.

Fairview Rgs took the points in their home game with Janesboro but once again they failed to impress needing a penalty to see off a hard working Boro XI.

Janesboro who lost their joint Manager Aidan Ryan in midweek, were forced to filed a weakened side but to their credit they turned in a spirited performance despite showing no reward at the final whistle.

Youngsters like Frank Herr, Jason Cross and goalkeeper Vincent Browne will have given manager Shane O’Hanlon renewed hope as he rebuilds the side.

Fairview however have no such concerns. On paper they have the strongest side in the League but have been struggling to click as a unit.

They had most of the possession but with Lee O’Mara dominant at centre back, they rarely looked like getting the breakthrough.

Despite possessing some of the fastest players in the League, they rarely use this to their advantage opting instead for the slower build up, giving teams the chance to organise the defence.

It looked as if Boro’s endeavour would pay off until a long kick out by Aaron Wall was flicked on by Jason Lipper and Ross Mann was tripped as he raced onto the through ball. From the resultant spot kick Darragh Rainsford expertly converted for the deciding goal.

Regional United returned to winning ways and moved into third spot with a 4-2 win at home to Prospect.

Two goals inside the opening five minutes by Ewan O’Brien put the home side firmly in the drivers seat but a goal by Trevor Hogan before the break reduced the deficit.

Dillon scored his second to seal the win for Regional.

Coonagh again showed great character to fight back to earn a point in their home game with Geraldines.

Cian Byrnes scored for ‘Dines to give them a 201 half time lead and minutes after the restart Donie Curtin made it 3-1.

Coonagh however, as they have shown on a few occasions this season, did not throw in the towel and a goal by Liam Morris put the result back into play before Billy Connors netted the equaliser.

Geraldines will be disappointed to have blown a two goal lead but will also be relieved as the home side missed a great chance to snatch all three points at the death.

Mungret Regional posted their second win of the campaign against bottom side Kilmallock.

Evan Barrett gave the visitors the lead and a penalty kick converted by Yakouba Yabre doubled their advanatge.

A super free kick by Ben Quirke reduced the deficit by half time.

After the break Mungret made sure of the points when Keelan Sexton netted a crucial third goal to kill off the home side.