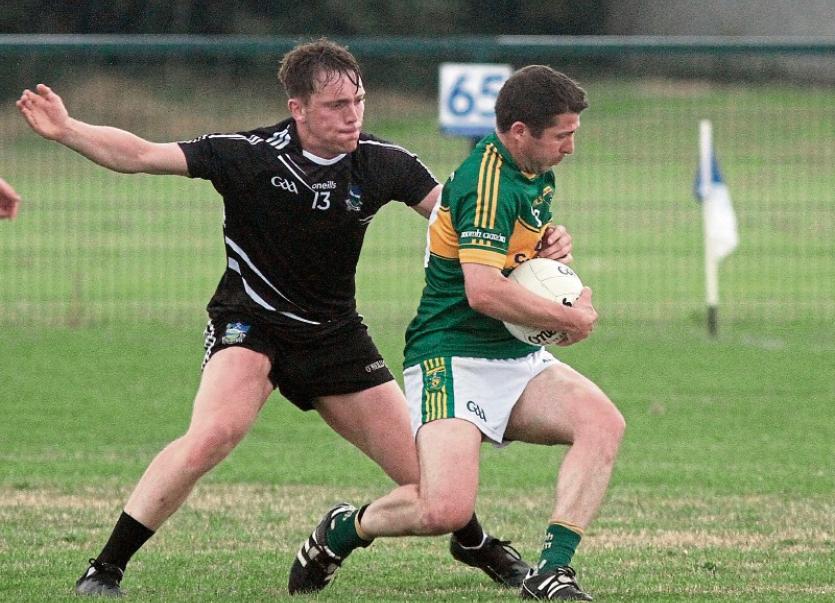 Paudie McCarthy, St Kieran's, under pressure from Eoin Hurley Newcastle West when the two sides met in the League final. Both are in championship quarter final action this weekend

THE race for the Fr Casey Cup can be whittled down to the final round this weekend with the quarter finals of the Irish Wire Products Limerick Senior Football Championship. Defending Limerick SFC winners Adare remain the clear favourites at 11/10.

Back-to-back champions Adare await the winner in the semi final on September 22.

While Newcastle West are no strangers to the business end of the championship, Ballysteen are bidding to reach a first semi final since 2012.

Ballysteen lost out to Ballylanders at this stage of the competition last year, while it was also Ballylanders that ended the 2018 season for Newcastle West – albeit in the semi final.

Newcastle have won all three Limerick SFC meetings of these teams since a 2014 draw.

Ballysteen arrive in the last six, with three wins and two defeats – remarkably despite a number of goalkeeping chances they have conceded just one goal.

Newcastle West, who have been without some key players, have won four games – losing to just Oola.

Saturday September 7 in Newcastle West at 5.30

The winner will play Oola in the semi final in Kilmallock on Saturday September 21.

Both sides are bidding to end a long without a semi final appearance – 2014 the last appearance for the Abbeyfeale men and 2013 for those from Ardagh-Coolcappa.

Fr Caseys didn’t make the knockout stages for the last two years, while St Kierans lost out to Monaleen at this stage last year.

These sides met in the championship last year with St Kierans the 0-11 to 0-7 winners. When they met in the ACFL this June, St Kierans were 3-12 to 1-8 winners enroute to the final, which they drew with Newcastle West.