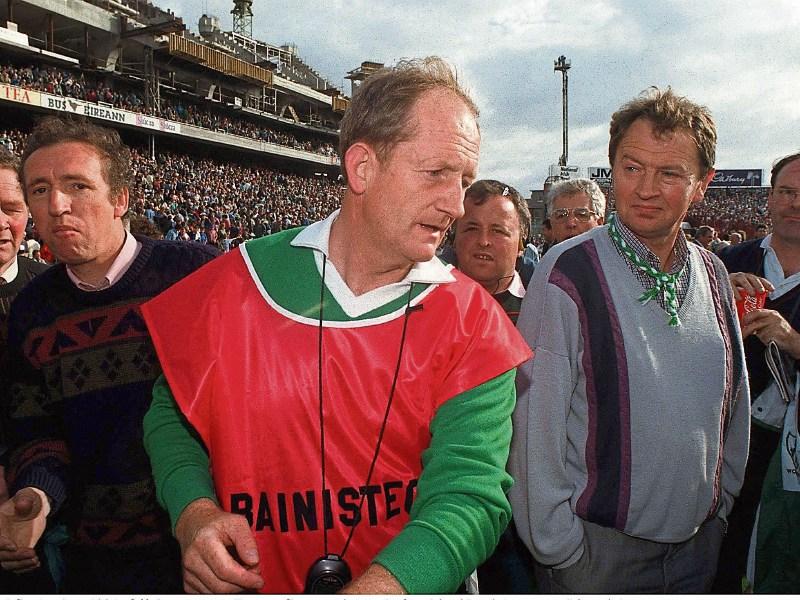 He had a job to do: Offaly manager Eamonn Cregan pictured after his sides victory over Limerick in the 1994 All-Ireland Hurling Final

Twenty five years ago last weekend we experienced the most outrageous end to the 1994 All-Ireland hurling final. Limerick looked well on the road and with just a few minutes left it appeared the great famine would end. That Limerick team lit up the summer and it was a great pity that, that group of players, would end their careers without an All-Ireland medal. It was a crazy finish that saw Offaly win the most dramatic final we have ever seen.

It was a killer blow. Limerick players were left numbed as they had to watch on as Offaly players walked up the Hogan Stand.

Tom Ryan was the Limerick manager. I can remember well the night he was appointed at the County Board meeting in Claughaun. The delegates didn’t know it then but Ryan certainly did things his way.

He made a point of going to every club in the county. He was looking for new players and everyone got their chance. Players saw a very different approach. He was direct, he was honest and in reality he didn’t care who you were. It was a case of do it his way or good luck to you. Limerick hurling was not used to that sort of approach. Tom Ryan had the steel to challenge the players and he was also well able to manage the County Board.

Losing that final could well have finished that group of players. They had one foot on the first step of the Hogan Stand and had only to see out the game and with hindsight that is what cost them the final.

They felt the game was over. Of all teams Offaly will always play to the finish. They were also greatly helped by having Eamon Cregan as Manger. It looked like he covered every blade of grass in Croke Park that day. Time after time he would circle the field, then run onto the pitch with instructions.

Talk to Offaly players today and they will talk with such respect for Eamon Cregan. He got the best from them and all of those players will tell you just how good a coach he was.

Many of them will say he was the best coach they ever had. Derry O’Donovan was Cregan’s right hand man. He was the trainer, he got close to the players and as a unit they had huge respect for both Donovan and Cregan.

I can remember when the game was over, standing just inside the old dressing room door with Eamon Cregan. He was shattered. I was trying to interview him but the tears ran down his face. It should have been a time of joy for him.

Eamon Cregan was probably the greatest hurler Limerick every produced. His love of Limerick was deep, deeper than most people will ever know.

To watch my childhood hero with tears on his face will stay with me forever. He tried to talk, he tried to make sense of it all.

He would start a few words and then he would say to me, “I had a job to do.” He was apologetic for the fact that he had trained a team to beat Limerick in an All-Ireland final.

I saw my first All-Ireland hurling final in 1980. I saw Limerick lose to Galway and I have seen every senior final since then and draws also.

I have worked on so many finals for RTE but that day in 1994 has never left me.

Our hearts were pumping with anticipation. Limerick looked home and dry. They had just to take control of the ball and see it out. How and where it went wrong will bring a diversity of view points but once Offaly saw weakness in Limerick they crushed them.

In the aftermath Tom Ryan was the subject of much criticism but in reality for almost all of that game it had gone to plan. Offaly had done a lot of smart hurling and kept in the game with great scores but Limerick who led 2-8 to 1-5 at half time should have closed the game out.

Willie Barrett was the match referee and Ciaran Carey won the first ball. Mike Houlihan got the opening score and Damien Quigley had the game of his life with two outstanding goals that should have been the platform for victory.

Offaly were always a sticky team and they kept in touch that day too. When Johnny Dooley stood over a free everyone expected him to go for a point. Instead he drove it to the net. What followed was madness.

Pat O’Connor flashed a first time ball past Joe Quaid who was playing in his fifth championship game. The rest was history. With every touch Offaly scored and what looked impossible was now a reality as Offaly finished winners 3-16 to 2-13.

JP or better known as ‘Jap’ Ryan was a long time Limerick selector. He always had a hurley in his hand. At games end he had a bundle of them and was first to congratulate Eamon Cregan.

While Offaly jumped for joy the Limerick players were broken men. I remember the dressing room for its silence. Some lads sat with towels over their heads. I remember saying to myself that is the last time these lads will see Croke Park. The fact that they returned two years later was a tribute in itself but losing to Wexford would prove even hard to cope with.

Those years were indeed very special for Limerick. Of course not winning an All-Ireland will tarnish it for most people but Limerick lit up hurling in those years.

We had some outstanding games and it was a time of great joy. We had a team that could compete and we had a manager that did things differently to others.

The County Board didn’t like how Tom Ryan did his business and we had all sorts of stuff going on. We had the twenty questions and much more.

Tom Ryan didn’t make it easy for them but after winning the National League in Ennis in 1997, the writing was on the wall for the Ballybrown man.

That group of players rattled the hurling cage of the hurling powers. They had many superb players that unfortunately left the stage, like many other Limerick players, without an All-Ireland medal.

Like so many more they will have regrets that will stay with them forever. The games lost have a habit of holding more space in the mind than the games won.

I will remember the era as a time when Limerick hurling was shaken up a bit. Lads that might have never got the opportunity to wear the green and white proved they had the talent to do so. Small clubs saw their stock rise and that provided a lift to many rural clubs.

The Offaly team were introduced to the crowd in Croke Park on All-Ireland final day. I spoke to many of the players. Eamon Cregan decided not attend. They were full of praise for him twenty five years on. One player said to me, “He was just a great coach, he had such passion and you knew this man walked the walk”

Stephen McDonagh who played in those finals with Limerick said,

“It was a few minutes of madness really. When it turned we could do nothing about it. We had some great days and made such friends from it. Tom Ryan lifted Limerick. He was a straight talker and he knew everything that was going on and the players knew that.”

Thankfully the famine has finally ended in Limerick and if we learned anything from that group of players of the 90’s it is that when opportunity comes it must be taken.

I would hope that the Limerick County Board would take the opportunity to remember that 1994 team before the year ends.